Jump to navigation Jump to search
The meridian 180° east or west of the Prime Meridian with which it forms a great circle
"Anti-Meridian" redirects here. For the Brave Saint Saturn album, see Anti-Meridian (album).
Not to be confused with ante meridiem (AM), the time before midday, for which see 12-hour clock. 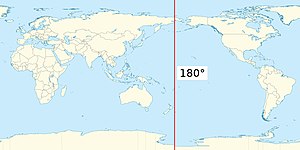 The International Date Line zigzags around the 180th Meridian.

The 180th meridian or antimeridian[1] is the meridian 180° both east and west of the Prime Meridian, with which it forms a great circle dividing the earth into the Western and Eastern Hemispheres. It is common to both east longitude and west longitude. It mostly passes through the open waters of the Pacific Ocean, but passes across land in Russia, Fiji and Antarctica. This meridian is used as the basis for the International Date Line, but the latter deviates from it to maintain date consistency within the territories of Russia, the United States, Kiribati, Fiji and New Zealand.

Starting at the North Pole and heading south to the South Pole, the 180th meridian passes through: 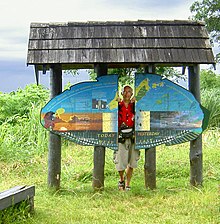 The meridian also passes between (but not particularly close to):

The only place where roads cross this meridian, and where there are buildings very close to it, is in Fiji.

Many geographic software libraries or data formats project the world to a rectangle; very often this rectangle is split exactly at the 180th meridian. This often makes it non-trivial to do simple tasks (like representing an area, or a line) over the 180th meridian. Some examples:

Retrieved from "https://en.wikipedia.org/w/index.php?title=180th_meridian&oldid=934423651"
Categories:
Hidden categories:
The article is a derivative under the Creative Commons Attribution-ShareAlike License. A link to the original article can be found here and attribution parties here. By using this site, you agree to the Terms of Use. Gpedia Ⓡ is a registered trademark of the Cyberajah Pty Ltd.