The 1848 United States presidential election was the 16th quadrennial presidential election, held on Tuesday, November 7, 1848. In the aftermath of the Mexican–American War, General Zachary Taylor of the Whig Party defeated Senator Lewis Cass of the Democratic Party.[2]

The contest was the first presidential election that took place on the same day in every state, and it was the first time that Election Day was statutorily a Tuesday.[3]

Despite Taylor's unclear political affiliations and beliefs, and the Whig opposition to the Mexican–American War, the 1848 Whig National Convention nominated the popular general over party stalwarts such as Henry Clay and Daniel Webster. For vice president, the Whigs nominated Millard Fillmore, a New York Whig known for his moderate views on slavery. Incumbent President James K. Polk, a Democrat, honored his promise not to seek re-election, leaving his party's nomination open. The 1848 Democratic National Convention rejected former President Martin Van Buren's bid for a second term, instead nominating Senator Lewis Cass of Michigan. Van Buren broke from his party to lead the ticket of the Free Soil Party, which opposed the extension of slavery into the territories.

The Whig choice of Zachary Taylor was made almost out of desperation; he was not clearly committed to Whig principles, but he was popular for leading the war effort. The Democrats had a record of prosperity and had acquired the Mexican cession and parts of Oregon country. It appeared almost certain that they would win unless the Whigs picked Taylor. Taylor won a plurality of the popular vote and a majority of the electoral vote, while Van Buren won 10.1% of the popular vote, a strong showing for a third party candidate.

Mexican–American War General Zachary Taylor of Kentucky, an attractive candidate because of his successes on the battlefield, but who had never voted in an election himself, was openly courted by both the Democratic and Whig parties. Taylor ultimately declared himself a Whig, and easily took their nomination, receiving 171 delegate votes to defeat Henry Clay, Winfield Scott, Daniel Webster and others.

After Webster turned down the vice-presidential candidacy, Millard Fillmore received the party's nomination for vice-president, defeating—among others—Abbott Lawrence, a Massachusetts politician whose mild opposition to slavery led him to be dubbed a "Cotton Whig".[4] 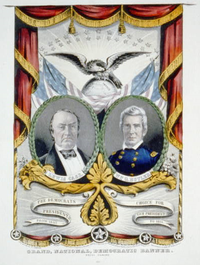 Former President Martin Van Buren once again sought the Democratic nomination, but withdrew before balloting began due to a dispute over the seating of the New York delegation, which culminated in the convention voting that half of the state's delegates be made up of the anti-slavery "Barnburner" faction lead by Van Buren, with the remaining half from the pro-slavery "Hunker" faction. Van Buren, knowing he had no feasible path to winning the nomination without the full support of the New York delegation, lead the Barnburners in withdrawing from the convention. The Hunkers, upset that they were not allowed to take the vacated seats of their Barnburner counterparts, likewise withdrew.

As a result of Van Buren's withdrawal, Senator Lewis Cass and incumbent Secretary of State James Buchanan were seen as the only serious contenders for the nomination, with a draft effort also focusing on Supreme Court associate justice Levi Woodbury. In stark contrast to the highly contested and protracted convention at the previous (and subsequent) election, Cass held a wide lead on all four ballots, only being denied victory on the third due to the convention rules stipulating that the votes of the absent New York delegates still counted towards the required two-thirds majority, before the Buchanan and Woodbury campaigns quietly released enough delegates to allow Cass victory on the fourth ballot.[5] Cass had served as Governor and Senator for Michigan, as well as Secretary of War under Andrew Jackson, and from 1836 to 1842 as ambassador to France. General William O. Butler was nominated to join Cass on the ticket, garnering 169 delegate votes to defeat five other candidates, including future Vice-President William R. King and future Confederate President Jefferson Davis.

Though he had made few public statements on the matter, Cass had long been suspected of pro-slavery leanings (Butler was known to be a moderate abolitionist, albeit he still owned slaves himself), and the convention agreed on a platform that made no mention of the issue. This failed to mollify Van Buren's supporters, most of whom bolted to form the Free Soil Party, eventually followed by Van Buren himself. 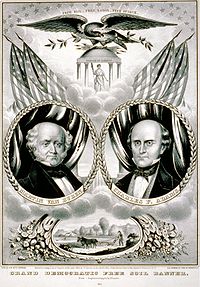 The Free Soil Party was organized for the 1848 election to oppose further expansion of slavery into the western territories. Much of its support came from disaffected anti-slavery Barnburner Democrats and Conscience Whigs, including former President Martin Van Buren. The party was led by Salmon P. Chase and John Parker Hale and held its 1848 convention in Utica and Buffalo, New York. On June 22, Van Buren defeated Hale by a 154-129 delegate count to capture the Free Soil nomination, while Charles Francis Adams, whose father (John Quincy Adams) and grandfather (John Adams) had both served as president, was chosen as the vice-presidential nominee.

Van Buren knew that the Free Soilers had not the slightest chance of winning, rather that his candidacy would split the Democratic vote and throw the election to the Whigs. Bitter and aging, Van Buren did not care despite the fact that his life had been built upon the rock of party solidarity and party regularity. He loathed Lewis Cass and the principle of popular sovereignty with equal intensity.[6]

Despite their significant showing in the prior presidential election, certain events would conspire to remove the Liberty Party from political significance.

Initially, the nomination was to be decided in the fall of 1847 at a Convention in Buffalo, New York. There, Senator John P. Hale was nominated over Gerrit Smith, brother-in-law to the party's previous nominee James G. Birney. Leicester King, a former judge and state senator in Ohio, was nominated to be Hale's running mate. Anti-slavery Democrats and Whigs, disappointed with their respective nominees, would form a new movement in conjunction with members of the Liberty Party such as John Hale and Salmon Chase to form the Free Soil Party that summer. At this point, both Hale and King withdrew in favor of a Free Soil ticket led by former President Martin Van Buren, and the great majority of members of the Liberty Party followed them into the new political party. A small faction refused to support Van Buren for the presidency, however. They held another convention in June 1848 as the "National Liberty Party." Gerrit Smith was nominated almost unanimously with Charles Foote, a religious minister from Michigan, as his running-mate.

The Native American Party, a precursor to the Know Nothings, which had split from the Whig Party in 1845, met in September 1847 in Philadelphia, where they nominated Zachary Taylor for president and Henry A. S. Dearborn of Massachusetts for vice-president. However, when the Whig Party nominated Taylor for the presidency with Millard Fillmore as his running mate the following year, this rendered his previous nomination moot and the Native American Party failed to make an alternate nomination.

The campaign was fought without much enthusiasm, and practically without an issue. Neither of the two great parties made an effort to rally the people to the defense of any important principle.

Whig campaigners, who included Abraham Lincoln and Rutherford B. Hayes, talked up Taylor's "antiparty" opposition to the Jacksonian commitment to the spoils system and yellow-dog partisanship. In the South, they stressed that he was a Louisiana slaveholder, while in the North they highlighted his Whiggish willingness to defer to Congress on major issues (which he subsequently did not do).

Democrats repeated, as they had for many years, their opposition to a national bank, high tariffs, and federal subsidies for local improvements. The Free Soilers branded both major parties lackeys of the Slave Arm, arguing that the rich planters controlled the agenda of both parties, leaving the ordinary white man out of the picture. They had to work around Van Buren's well-known reputation for compromising with slavery.

The Whigs had the advantage of highlighting Taylor's military glories. With Taylor remaining vague on the issues, the campaign was dominated by personalities and personal attacks, with the Democrats calling Taylor vulgar, uneducated, cruel and greedy, and the Whigs attacking Cass for graft and dishonesty. The division of the Democrats over slavery allowed Taylor to dominate the Northeast.[7]

The Free Soilers were on the ballots in only 17 of the 29 states with the popular vote, making it mathematically possible for Van Buren to win the presidency, but he had no real chance. Still, the party campaigned vigorously, particularly in the traditional Democrat strongholds in the northeast.

While some Free Soilers were hopeful of taking enough states to throw the election into the House of Representatives, Van Buren himself knew this was a long shot and that the best that his party could do was lay the groundwork for a hopefully improved showing in 1852.

Results by county explicitly indicating the percentage of the winning candidate in each county. Shades of yellow are for Taylor (Whig), shades of blue are for Cass (Democrat), and shades of green are for Van Buren (Free Soil). 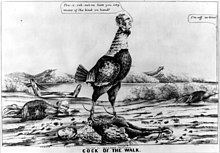 "Cock of the walk" - Zachary Taylor as victor

With Taylor as their candidate, the Whigs won their second and last victory in a Presidential election. Taylor won the electoral college by capturing 163 of the 290 electoral votes, while the popular vote was close: Taylor out-polled Cass in the popular vote by 138,000 votes, winning 47% of the popular vote, and was elected president.

Conversely, in the Middle Atlantic region, Free Soil bases of strength lay in the areas which had hitherto been Democratic, particularly in New York and northern Pennsylvania. The Free Soil Democrats nomination of Van Buren made the victory of Taylor nearly certain in New York. On election day, enough Democratic votes were drawn away by Van Buren to give the Whig ticket all but two Democratic counties, thus enabling it to carry hitherto impregnable parts of upper New York state. The Democrats, confronted with an irreparable schism in New York, lost the election.

In New England, the Democratic vote declined by 33,000 from its 1844 level, while the Whig vote likewise declined by 15,000 votes. The third-party vote tripled, and the total vote remained nearly stationary: a partial indication, perhaps, of the derivation of the Free Soil strength in this section. For the first time since the existence of the Whig Party, the Whigs failed to gain an absolute majority of the vote in Massachusetts and Vermont. In addition, the Democrats failed to retain their usual majority in Maine; thus only New Hampshire (Democratic) and Rhode Island (Whig) of the states in this section gave their respective victorious parties clear-cut majorities.

As one historian remarks, somewhat sarcastically, practically the only thing it decided was that a Whig general should be made President because he had done effective work in carrying on a Democratic war.

This was the first election where the two leading candidates each carried half of the states. As of 2018, it has subsequently happened just once, in 1880. Source: Data from Walter Dean Burnham, Presidential ballots, 1836–1892 (Johns Hopkins University Press, 1955) pp 247–57.

* Massachusetts law provided that the state legislature would choose the Electors if no slate of Electors could command a majority of voters statewide. In 1848, this provision was triggered.

Retrieved from "https://en.wikipedia.org/w/index.php?title=1848_United_States_presidential_election&oldid=970025290"
Categories:
Hidden categories:
The article is a derivative under the Creative Commons Attribution-ShareAlike License. A link to the original article can be found here and attribution parties here. By using this site, you agree to the Terms of Use. Gpedia Ⓡ is a registered trademark of the Cyberajah Pty Ltd.