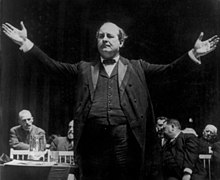 The event is widely considered a significant part of Denver's political and social history.

The 1908 convention was the first convention of a major political party in a Western state. The city did not host another nominating convention until a century later, at the 2008 Democratic National Convention.

John W. Kern of Indiana was unanimously declared the candidate for vice-president without a formal ballot after the names of Charles A. Towne, Archibald McNeil, and Clark Howell were withdrawn from consideration.

Retrieved from "https://en.wikipedia.org/w/index.php?title=1908_Democratic_National_Convention&oldid=937309830"
Categories:
The article is a derivative under the Creative Commons Attribution-ShareAlike License. A link to the original article can be found here and attribution parties here. By using this site, you agree to the Terms of Use. Gpedia Ⓡ is a registered trademark of the Cyberajah Pty Ltd.