After President Calvin Coolidge declined to seek reelection, Hoover emerged as his party's frontrunner. As Hoover's party opponents failed to unite around a candidate, Hoover received a large majority of the vote at the 1928 Republican National Convention. The strong state of the economy discouraged some Democrats from running, and Smith was nominated on the first ballot of the 1928 Democratic National Convention. Hoover and Smith had been widely known as potential presidential candidates long before the 1928 campaign, and both were generally regarded as outstanding leaders. Both were newcomers to the presidential race and presented in their person and record an appeal of unknown potency to the electorate. Both faced serious discontent within their respective parties' membership, and both lacked the wholehearted support of their parties' organization.[2]

In the end, the Republicans were identified with the booming economy of the 1920s, and Smith, a Roman Catholic, suffered politically from anti-Catholic prejudice, his opposition to Prohibition, and his association with the legacy of corruption by Tammany Hall. Hoover won a third straight Republican landslide and made substantial inroads in the traditionally-Democratic Solid South by winning several states that had not voted for a Republican since the end of Reconstruction. Hoover's victory made him the first president born west of the Mississippi River, and he is the most recent sitting member of the Cabinet to win a major party's presidential nomination.

With President Calvin Coolidge choosing not to enter the race, the race for the nomination was wide open. The leading candidates were Secretary of Commerce Herbert Hoover, former Illinois Governor Frank Orren Lowden and Senate Majority Leader Charles Curtis. A movement to draft Coolidge failed to gain traction with party insiders or even to persuade Coolidge himself.[3][4]

In the few primaries that mattered, Hoover did not perform as well as expected, and it was thought that President Coolidge or Vice-President Charles G. Dawes might accept a draft in case of a deadlock, but Lowden withdrew just as the convention was about to start, which paved the way for a Hoover victory.[5]

The Republican Convention was held in Kansas City, Missouri, from June 12 to 15 and nominated Hoover on the first ballot. With Hoover disinclined to interfere in the selection of his running mate, the party leaders were at first partial to giving Dawes a shot at a second term, but when that information leaked, Coolidge sent an angry telegram that said that he would consider a second nomination for Dawes, whom he hated, a "personal affront."[6] To attract votes from farmers who were concerned about Hoover's pro-business orientation, the nomination was instead offered to Curtis. He accepted and was nominated overwhelmingly on the first ballot.[7]

In his acceptance speech eight weeks after the convention ended, Hoover said: "We in America today are nearer to the final triumph over poverty than ever before in the history of this land... We shall soon with the help of God be in sight of the day when poverty will be banished from this land."[8] That sentence would haunt Hoover during the Great Depression.

The memory of the Teapot Dome scandal was rapidly fading, and the current state of prosperity making the party's prospects looked dim. Most of the major Democratic leaders, such as William Gibbs McAdoo, were therefore content to sit out the election.[citation needed] One who did not do so was New York Governor Al Smith, who had made two attempts to secure the Democratic nomination.[9]

The 1928 Democratic National Convention was held in Houston, Texas, on June 26 to 28, and Smith became the candidate on the first ballot.

The leadership asked the delegates to nominate Senator Joseph Taylor Robinson of Arkansas, in many ways Smith's political polar opposite, to be his running mate, and Robinson was nominated for vice-president.[10][11]

Smith was the first Roman Catholic to gain a major party's nomination for president, and his religion became an issue during the campaign. Many Protestants feared that Smith would take orders from church leaders in the Vatican in making decisions affecting the country.[12][13]

Anti-Catholicism was a significant problem for Smith's campaign. Protestant ministers warned that he would take orders from the Pope, who many Americans sincerely believed would move to the United States to rule the country from a fortress in Washington, DC. A popular joke of the time was that after the election, Smith sent a one-word telegram advising Pope Pius XI, "Unpack."[15][16] Beyond the conspiracy theories, a survey of 8,500 Southern Methodist Church ministers found only four who supported Smith, and the northern Methodists, Southern Baptists, and Disciples of Christ were similar in their opposition. Many voters who sincerely rejected bigotry and the anti-Catholic Ku Klux Klan, which had declined during the 1920s until the 1928 campaign revived it, justified their opposition to Smith on their belief that the Catholic Church was an "un-American" and "alien culture" that opposed freedom and democracy.[16]

An example was a statement issued in September 1928 by the National Lutheran Editors' and Managers' Association that opposed Smith's election. The manifesto, written by Dr. Clarence Reinhold Tappert, warned about "the peculiar relation in which a faithful Catholic stands and the absolute allegiance he owes to a 'foreign sovereign' who does not only 'claim' supremacy also in secular affairs as a matter of principle and theory but who, time and again, has endeavored to put this claim into practical operation." The Catholic Church, the manifesto asserted, was hostile to American principles of separation of church and state and of religious toleration.[17] Groups circulated a million copies of a counterfeit oath, claiming that fourth-degree Knights of Columbus members swore to exterminate Freemasons and Protestants and to commit violence against anyone if the church ordered.[18] Smith's opposition to Prohibition, a key reform promoted by Protestants, also lost him votes, as did his association with Tammany Hall. Because many anti-Catholics used the issues to cover for their religious prejudices, Smith's campaign had difficulty denouncing anti-Catholicism as bigotry without offending others who favored Prohibition or disliked Tammany corruption.[16]

Those issues made Smith lose several states of the Solid South that had been carried by Democrats since Reconstruction.[19] However, many southern states with sizable African American populations, the vast majority of whom could not vote, many believed that Hoover supported integration or at least was not committed to maintaining segregation, which, in turn, overcame opposition to Smith's campaign. Mississippi Governor Theodore G. Bilbo claimed that Hoover had met with a black member of the Republican National Committee and danced with her. Hoover's campaign quickly denied the "untruthful and ignoble assertion."[20]

Smith's religion helped him with Roman Catholic New England immigrants, especially Irish-Americans and Italian-Americans, which may have explained his narrow victories in traditionally-Republican Massachusetts and Rhode Island and his narrow loss in his home state of New York, where previous Democratic presidential candidates had lost by double digits, but Smith lost by only 2%.[21]

Results by county explicitly indicating the margin of victory for the winning candidate. Shades of red are for Hoover (Republican) and shades of blue are for Smith (Democratic), and shades of green are for "Other(s)" (Non-Democratic/Non-Republican), gray indicates zero recorded votes, and white indicates territories not elevated to statehood.[22]

The total vote exceeded that of 1924 by nearly eight million, which was nearly twice the vote cast in 1916 and nearly three times that of 1896. Every section in the Union increased its vote although the Mountain, East South Central and West South Central States did so least of all. The greatest increases were in the heavily-populated (Northeastern) Mid-Atlantic and East North Central States, where more than 4,250,000 more votes were cast, more than half of the nationwide increase. There was an increase of over a million each in New York and Pennsylvania.[23]

Hoover won the election by a wide margin on pledges to continue the economic boom of the Coolidge years. He received more votes than any previous candidate of the Republican Party in every state except five: Rhode Island, Iowa, North Dakota, South Carolina, and Tennessee.[24] The Hoover vote was greater than the Coolidge vote in 2,932 counties; it was less in 143 of the comparable counties.[25] The 21,400,000 votes cast for Hoover also touched the high-water mark for all votes for a presidential candidate until then and were an increase of more than 5,500,000 over the Coolidge vote four years earlier.[2] The Republican ticket made substantial inroads in the South: the heaviest Democratic losses were in the three Southern sections (South Atlantic, East South Central, West South Central). The losses included 215 counties that had never before supported a Republican presidential candidate, distributed as follows: Alabama (14), Arkansas (5), Florida (22), Georgia (4), Kentucky (28), Maryland (3), Mississippi (1), Missouri (10), North Carolina (16), Tennessee (3), Texas (64), Virginia (26), West Virginia (4). In Georgia, eight counties recorded more votes cast for "anti-Smith" electors than either major-party candidate,[23] amd one county in Wyoming had no recorded votes.

Smith polled more votes than had any previous Democratic candidate in 30 of the 48 states, all but Alabama, Colorado, Delaware, Idaho, Kansas, Kentucky, Montana, Nevada, New Mexico, North Carolina, Oklahoma, Oregon, South Carolina, Tennessee, Texas, Utah, Virginia, and Washington. In only four of them (Tennessee, Oklahoma, Texas, and New Mexico) did Smith receive fewer votes than John W. Davis had in 1924.[23]

Smith received nearly as many votes as Coolidge had in 1924, and his vote exceeded Davis's by more than 6,500,000.[23] The Democratic vote was greater than in 1924 in 2080 counties and fell in 997 counties. In only one section did the Democratic vote drop below 38%, the Pacific, which was the only one in which the Republican vote exceeded 60%. However, the Democrats made gains in five sections; of those counties, fourteen had never been Democratic and seven had been Democratic only once. The size and the nature of the distribution of the Democratic vote illustrated Smith's strengths and weaknesses as a candidate. Despite evidence of an increased Democratic vote, Smith's overwhelming defeat in the electoral college and the retention of so few Democratic counties reflected Hoover's greater appeal. Smith won the electoral votes of only the Deep South of the Democratic Solid South, Robinson's home state of Arkansas, and the New England states of Massachusetts and Rhode Island, both of which had a large proportion of Catholic voters. His 87 electoral votes were the fewest that a Democratic candidate had won since the 80 votes earned by Horatio Seymour in 1868, not counting Horace Greeley in 1872, who was endorsed by the Democratic Party but ran as a Liberal Republican. Hoover even triumphed by a narrow margin in Smith's home state of New York. Smith carried 914 counties, the fewest in the Fourth Party System. The Republican total leaped to 2,174 counties, a larger number than even the 1920 landslide.[23]

Third-party support sank almost to the vanishing point, as the election of 1928 proved to be a two-party contest to a greater extent than any other in the Fourth Party System. Until the major split before the 1948 election in the Democratic Party between Southern Democrats and the more liberal Northern faction, no further significant third-party candidacies as seen in 1912 and 1924 were to occur. All "other" votes totaled only 1.08 percent of the national popular vote. The Socialist vote sank to 267,478, and in seven states, there were no Socialist votes.[23] 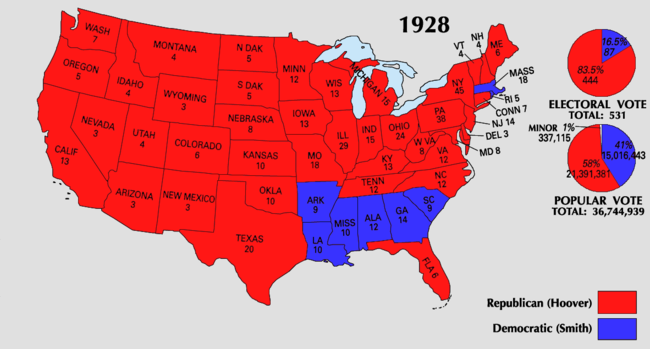 Counties with Highest Percent of Vote (Other)

Retrieved from "https://en.wikipedia.org/w/index.php?title=1928_United_States_presidential_election&oldid=970104302"
Categories:
Hidden categories:
The article is a derivative under the Creative Commons Attribution-ShareAlike License. A link to the original article can be found here and attribution parties here. By using this site, you agree to the Terms of Use. Gpedia Ⓡ is a registered trademark of the Cyberajah Pty Ltd.