The 1944 United States presidential election was the 40th quadrennial presidential election. It was held on Tuesday, November 7, 1944. The election took place during World War II. Incumbent Democratic President Franklin D. Roosevelt defeated Republican Thomas E. Dewey to win an unprecedented fourth term. Until 1996, this would be the last time in which an incumbent Democratic president would win reelection after serving a full term in office.

Roosevelt had become the first president to win a third term with his victory in the 1940 presidential election, and there was little doubt that he would seek a fourth term. Unlike in 1940, Roosevelt faced little opposition within his own party, and he easily won the presidential nomination of the 1944 Democratic National Convention. Concerned that Roosevelt's ill-health would mean the Vice President would likely become President, the convention dropped Roosevelt's running mate Henry A. Wallace in favor of Senator Harry S. Truman of Missouri.[2] Governor Dewey of New York emerged as the front-runner for the Republican nomination after his victory in the Wisconsin primary, and he defeated conservative Governor John W. Bricker at the 1944 Republican National Convention.

As World War II was going well for the United States and its Allies, Roosevelt remained popular despite his long tenure. Dewey campaigned against the New Deal and for a smaller government, but was ultimately unsuccessful in convincing the country to change course. The election was closer than Roosevelt's other presidential campaigns, but Roosevelt still won by a comfortable margin in the popular vote and by a wide margin in the Electoral College. Rumors of Roosevelt's ill health, though somewhat dispelled by his vigorous campaigning, proved to be prescient; Roosevelt died less than three months into his fourth term and was succeeded by Truman. 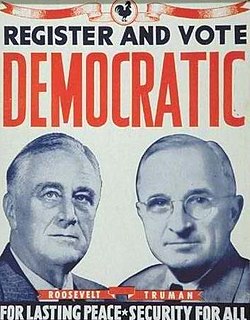 President Roosevelt was the popular, wartime incumbent and faced little formal opposition. Although many Southern Democrats mistrusted Roosevelt's racial policies, he brought enormous war activities to the region and the end of its marginal status was in sight. No major figure opposed Roosevelt publicly, and he was re-nominated easily when the Democratic Convention met in Chicago. Some pro-segregationist delegates tried to unite behind Virginia senator Harry F. Byrd, but he refused to campaign actively against Roosevelt, and did not get enough delegates to seriously threaten the President's chances.

The obvious physical decline in the president's appearance, as well as rumors of secret health problems, led many delegates and party leaders to oppose Vice President Henry A. Wallace for a second term strongly. Opposition to Wallace came especially from Catholic leaders in big cities and labor unions. Wallace, who had been Roosevelt's vice president since January 1941, was regarded by most conservatives as being too left-wing and personally eccentric to be next in line for the presidency. He had performed so poorly as economic coordinator that Roosevelt had to remove him from that post. Numerous party leaders privately sent word to Roosevelt that they would fight Wallace's re-nomination as vice president and proposed instead Senator Harry S. Truman, a moderate from Missouri. Truman was highly visible as the chairman of a Senate wartime committee investigating fraud and inefficiency in the war program. Roosevelt, who personally liked Wallace and knew little about Truman, agreed reluctantly to accept Truman as his running mate to preserve party unity.[3] Even so, many delegates on the left refused to abandon Wallace, and they voted for him on the first ballot. [4] However, enough large Northern, Midwestern, and Southern states supported Truman to give him victory on the second ballot. The fight over the vice-presidential nomination proved to be consequential; Roosevelt died in April 1945, and Truman instead of Wallace became the nation's thirty-third President.[5]

As 1944 began, the frontrunners for the Republican nomination appeared to be Wendell Willkie, the party's 1940 nominee, Senator Robert A. Taft from Ohio, the leader of the party's conservatives, New York Governor Thomas E. Dewey, the leader of the party's moderate eastern establishment, General Douglas MacArthur, then serving as an Allied commander in the Pacific theater of the war, and former Minnesota Governor Harold Stassen, then serving as a U.S. naval officer in the Pacific. Taft surprised many by declining to run for president as he wanted to remain in the Senate; instead, he voiced his support for a fellow Ohio conservative, Governor John W. Bricker.[6]

With Taft out of the race some Republican conservatives favored General MacArthur. However, MacArthur's chances were limited by the fact that he was leading Allied forces against Japan, and thus could not campaign for the nomination. His supporters entered his name in the Wisconsin primary nonetheless. The Wisconsin primary proved to be the key contest, as Dewey won by a surprisingly wide margin. He took fourteen delegates to four for Harold Stassen, while MacArthur won the three remaining delegates. Willkie was shut out in the Wisconsin primary; he did not win a single delegate. His unexpectedly poor showing in Wisconsin forced him to withdraw as a candidate for the nomination. However, at the time of his sudden death in early October 1944, Willkie had endorsed neither Dewey nor Roosevelt. At the 1944 Republican National Convention in Chicago, Dewey easily overcame Bricker and was nominated for president on the first ballot. Dewey, a moderate to liberal Republican, chose the conservative Bricker as his running mate. Dewey originally preferred fellow liberal California Governor Earl Warren, but agreed on Bricker to preserve party unity (Warren would go on to run with Dewey in the 1948 election). Bricker was nominated for vice president by acclamation.

Results by county explicitly indicating the percentage for the winning candidate. Shades of blue are for Roosevelt (Democratic), shades of red are for Dewey (Republican), and shades of green are for "No Candidate" (Texas Regulars).

The Republicans campaigned against the New Deal,[7] seeking a smaller government and less-regulated economy as the end of the war seemed in sight. Nonetheless, Roosevelt's continuing popularity was the main theme of the campaign. To quiet rumors of his poor health, Roosevelt insisted on making a vigorous campaign swing in October and rode in an open car through city streets.

A high point of the campaign occurred when Roosevelt, speaking to a meeting of labor union leaders, gave a speech carried on national radio in which he ridiculed Republican claims that his administration was corrupt and wasteful with tax money.[8] He particularly derided a Republican claim that he had sent a US Navy warship to pick up his Scottish Terrier Fala in Alaska, noting that "Fala was furious" at such rumors.[9] The speech was met with loud laughter and applause from the labor leaders. In response, Governor Dewey gave a blistering partisan speech in Oklahoma City a few days later on national radio, in which he accused Roosevelt of being "indispensable" to corrupt big-city Democratic organizations and American Communists;[10] he also referred to members of Roosevelt's cabinet as a "motley crew". However, American battlefield successes in Europe and the Pacific during the campaign, such as the liberation of Paris in August 1944 and the successful Battle of Leyte Gulf in the Philippines in October 1944, made President Roosevelt unbeatable.

Throughout the campaign, Roosevelt led Dewey in all the polls by varying margins. On election day, the Democratic incumbent scored a fairly comfortable victory over his Republican challenger. Roosevelt took 36 states for 432 electoral votes (266 were needed to win), while Dewey won twelve states and 99 electoral votes. In the popular vote, Roosevelt won 25,612,916 (53.4%) votes to Dewey's 22,017,929 (45.9%).

The important question had been which leader,[11] Roosevelt or Dewey, should be chosen for the critical days of peacemaking and reconstruction following the war's conclusion. Most American voters concluded that they should retain the governing party, and particularly the president who represented it. They also felt it unsafe to do so in "wartime", in view of ever-increasing domestic disagreements.

Dewey did better against Roosevelt than any of Roosevelt's previous three Republican opponents: Roosevelt's percentage and margin of the total vote were both less than in 1940. Dewey also gained the personal satisfaction of finishing ahead of Roosevelt in his hometown of Hyde Park, New York, and ahead of Truman in his hometown of Independence, Missouri.[12] Dewey would again become the Republican presidential nominee in 1948, challenging President Truman (who had assumed that office on FDR's death), and would again lose, though by somewhat smaller popular- and electoral-vote margins.

In New York, only the combined support of the American Labor and Liberal parties (pledged to Roosevelt but otherwise independent of the Democrats to maintain their identities) enabled Roosevelt to win the electoral votes of his home state.

In 1944, the constantly growing Southern protest against Roosevelt's leadership became clearest in Texas, where 135,553 people voted against Roosevelt but not for the Republican ticket. The Texas Regular ticket resulted from a split in the Democratic Party in its two state conventions, May 23 and September 12, 1944. This ticket, which represented the Democratic element opposing the re-election of President Roosevelt, called for the "restoration of states' rights which have been destroyed by the Communist New Deal" and "restoration of the supremacy of the white race".[13] Its electors were uninstructed. 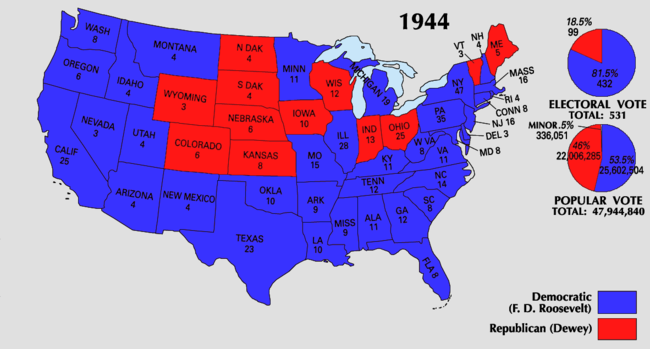 Retrieved from "https://en.wikipedia.org/w/index.php?title=1944_United_States_presidential_election&oldid=970104396"
Categories:
Hidden categories:
The article is a derivative under the Creative Commons Attribution-ShareAlike License. A link to the original article can be found here and attribution parties here. By using this site, you agree to the Terms of Use. Gpedia Ⓡ is a registered trademark of the Cyberajah Pty Ltd.