Jump to navigation Jump to search
Four points on Earth which are halfway between the geographical poles, the equator, the Prime Meridian, and the 180th meridian

The original marker for the 45×90 point in North America; the sign was later amended to explain that the real location is actually approximately 324 m (1,063 ft) behind and to the left of the marker on the ground. 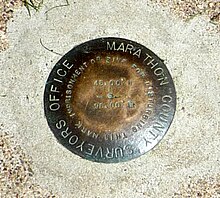 Close up of the incorrectly placed marker in Marathon County, Wisconsin, United States

The 45×90 points are the four points on Earth which are halfway between the geographical poles, the equator, the Prime Meridian, and the 180th meridian.

The point has become something of a pop culture phenomenon thanks to Gesicki's Tavern in the tiny cluster of establishments in Poniatowski.[3] They once sold 45×90 T-shirts and registered visitors as members of the "45x90 Club".[3] Since 2006, the Wausau/Central Wisconsin Convention & Visitors Bureau has been the holder of the official "45x90 Club" registration book. The book is on loan from the Gesicki family.[4] Upon becoming a member of the "45x90 Club", the Wausau/Central Wisconsin Convention & Visitors Bureau will give new members a commemorative coin.

The search for Malaysia Airlines Flight 370 was near the coordinate 45°S, 90°E. The coordinate is closest to the red dot labeled as Gaofen 1 at the bottom, halfway between the center and left side of the image.

In March 2014, the location in the southern Indian Ocean was the subject of an aerial search for the missing Malaysia Airlines Flight 370, after potential debris were spotted by satellite centered on the 45°S, 90°E location.[6][7]

The southern Indian Ocean location and the point in Wisconsin are antipodes of each other.

The southern Pacific Ocean location and the point in China are antipodes of each other.

Retrieved from "https://en.wikipedia.org/w/index.php?title=45×90_points&oldid=972416451"
Categories:
Hidden categories:
The article is a derivative under the Creative Commons Attribution-ShareAlike License. A link to the original article can be found here and attribution parties here. By using this site, you agree to the Terms of Use. Gpedia Ⓡ is a registered trademark of the Cyberajah Pty Ltd.