The 50th parallel north is a circle of latitude that is 50 degrees north of the Earth's equatorial plane. It crosses Europe, Asia, the Pacific Ocean, North America, and the Atlantic Ocean. 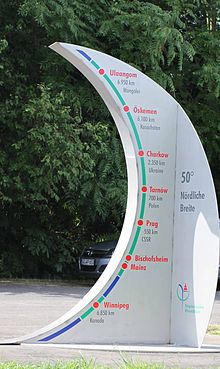 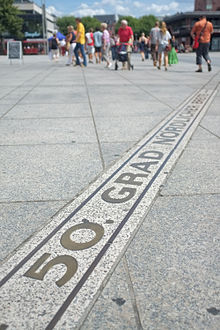 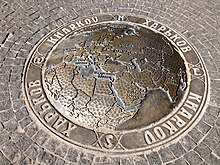 A plaque marking the 50th parallel north in Kharkiv, Ukraine

Starting at the Prime Meridian and heading eastwards, the parallel 50° north passes through:

Sakhalin island between 1905 and 1945. The area south of the 50th parallel line was under Japanese control

From the signing of the 1875 Treaty of Saint Petersburg until the Russo-Japanese War which broke in 1904, Russia had full control of Sakhalin island. As a result of the 1905 Treaty of Portsmouth that brought an end to the Russo-Japanese War, the portion of the island south of the 50th parallel line became Japanese territory, part of Karafuto Prefecture. However, following the month long Soviet–Japanese War during the summer of 1945, the entire island was reunified under Soviet control.[4]

Retrieved from "https://en.wikipedia.org/w/index.php?title=50th_parallel_north&oldid=971896952"
Categories:
Hidden categories:
The article is a derivative under the Creative Commons Attribution-ShareAlike License. A link to the original article can be found here and attribution parties here. By using this site, you agree to the Terms of Use. Gpedia Ⓡ is a registered trademark of the Cyberajah Pty Ltd.