The 60th parallel north is a circle of latitude that is 60 degrees north of Earth's equator. It crosses Europe, Asia, the Pacific Ocean, North America, and the Atlantic Ocean.

Although it lies approximately twice as far away from the Equator as from the North Pole, the 60th parallel is half as long as the Equator line. This is where the Earth bulges halfway as much as on the Equator.

The lowest latitude where white nights can be observed is approximately on this parallel.

Starting at the Prime Meridian and heading eastwards, the parallel 60° north passes through: 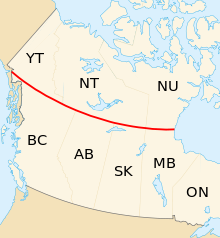 The 60th parallel north in Canada, marking the southern borders of Yukon, Northwest Territories, and the Nunavut mainland.

In Canada, the 60th parallel constitutes the mainland boundary between the northern territories of Yukon, Northwest Territories, and Nunavut to the north, and the western provinces of British Columbia, Alberta, Saskatchewan, and Manitoba to the south.

Accordingly, "north of 60" is an expression often used for the territories, although parts of Nunavut (the islands in Hudson Bay and James Bay) are located south of the 60th parallel, and parts of Quebec and Newfoundland and Labrador are located north, to the east of Hudson Bay. A 1990s TV show on CBC about life in the Northwest Territories was called North of 60.

Canada's only four corners are located at the intersection of the 60th parallel and the 102nd meridian west, between the Northwest Territories, Nunavut, Saskatchewan, and Manitoba. However, this is not a true quadripoint as the measurement of the Saskatchewan/Manitoba border in the 1880s placed it approximately 400 metres (440 yd) west of the 102nd meridian, which defines part of the Northwest Territories/Nunavut border.

Between 1776 (leap year starting on Monday) and 1950 (common year starting on Sunday), the 60th parallel formed the southern limit of the Royal Greenland Trade Department's exclusive monopoly on trade near the Dano-Norwegian and later Danish colonies of Greenland (1776–1782) and South Greenland (1782–1950).[4]

Retrieved from "https://en.wikipedia.org/w/index.php?title=60th_parallel_north&oldid=949511401"
Categories:
Hidden categories:
The article is a derivative under the Creative Commons Attribution-ShareAlike License. A link to the original article can be found here and attribution parties here. By using this site, you agree to the Terms of Use. Gpedia Ⓡ is a registered trademark of the Cyberajah Pty Ltd.