Abbán moccu Corbmaic (Latin: Abbanus; d. 520? AD), also Eibbán or Moabba, is a saint in Irish tradition. He was associated, first and foremost, with Mag Arnaide (Moyarney or Adamstown, near New Ross, Co. Wexford) and with Cell Abbáin (Killabban, County Laois).[3] His cult was, however, also connected to other churches elsewhere in Ireland, notably that of his alleged sister Gobnait.

Three recensions of the saint's Life survive, two in Latin and one in Irish. The Latin versions are found in the Codex Dublinensis and the Codex Salmanticensis, while the Irish version is preserved incomplete in two manuscripts: the Mícheál Ó Cléirigh's manuscript Brussels, Royal Library MS 2324-40, fos. 145b-150b and also the RIA, Stowe MS A 4, pp. 205–21.[4] These Lives probably go back to a Latin exemplar written in ca. 1218 by the bishop of Ferns, Ailbe Ua Maíl Mhuaidh (Ailbe O'Mulloy), who died in 1223.[3] His interest in the saint partly stemmed from the fact that Mag Arnaide lay within the diocese of Ferns, but as this was only a minor church in his time, more must have been involved.[3] An episode which shows something of Ailbe's personal attachment to the saint's cult is that where the saint arrives in the area between Éile and Fir Chell, i.e. on the marches between Munster and Leinster: Abbán converts a man of royal rank from the area and baptises his son. Ailbe is known to have been a native of this area, but his own commentary as apparently preserved in the Dublin Life identifies the connection more nearly: "I who gathered together and wrote the Life am a descendant [nepos] of that son"[3][5] However, the immediate circumstances which prompted the composition of the Life are likely to have been political, relating to Norman presence in the diocese of Ferns. To support his case, Ailbe made much of the saint's wider connections to other churches and saints, making him travel all across the country and in the case of the anecdote about Abingdon (see below), even inventing tradition.[3]

Other sources for Abbán's life and cult include the Irish genealogies of the saints and the entries for his feast-day in the martyrologies. His pedigree is given in the Book of Leinster, Leabhar Breac, Rawlinson B 502 and in glosses to his entries in the Félire Óengusso.[6] 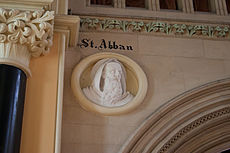 His pedigree in the Irish genealogies, which appear to have been composed in the interest of Cell Abbáin, suggests that he belonged to the Uí Chormaic (also Moccu Chormaic or Dál Chormaic).[3] It identifies his father as Laignech (lit. "Leinsterman"), son of Mac Cainnech, son of Cabraid, son of Cormac, son of Cú Corb,[7] while an Irish note to the Félire Óengusso (for 27 October) largely agrees if substituting Cabraid for Imchad.[6] The Lives, on the other hand, state that his father was Cormac son of Ailill, king of Leinster, who died in 435 according to the Annals of the Four Masters, and name his mother Mílla, sister to St Ibar.[8][9]

The Lives confuse the time of the saint's historical floruit by attributing to him a life-span of over 300 years.[10] He is brought into contact with such illustrious saints as Finnian of Clonard, Brendan of Clonfert (d. 577), Columba (d. 597), Gregory the Great, Munnu and Moling. One of the saint's foundations is said to have been repeatedly pillaged by Cormac mac Diarmata (fl. 2nd half of the 6th century), king of Leinster from the Uí Bairrche, who is portrayed in much Leinster hagiography as a rival to the Uí Chennselaig. Abbán is also made a contemporary of even earlier figures like Saint Íbar, who is claimed to be his maternal uncle, and St Patrick.

Nothing is known of Abbán's early life. The Lives tell that he was expected to succeed his father in Leinster, but that his devotion to God and the saintly miracles which he wrought while still in fosterage soon made clear that he was destined for a career in the church. The boy was sent to his maternal uncle, Bishop Íbar, with whom he travelled to Rome.[11] In Italy, Abbán's saintly powers proved to be of much use in warding off any danger presented by men, monsters and supernatural phenomena. Throughout the text, Abbán can be seen demonstrating his powers, exercising special authority over rivers and seas.

However, Abbán's activities were also linked to many other parts of Ireland. Of special note is the tradition that St Gobnait was his sister and that his grave was to be found near her church or nunnery in Bairnech, now Ballyvourney (Muskerry, Co. Cork).[3] As the later recensions suggest, Ailbe's original Life seems to build on this connection by claiming that Abbán founded Ballyvourney and gave it to his sister.[3] According to his Lives, he began to found a string of churches after returning from a second visit to Rome. Other churches said to have been founded by him include Cell Ailbe (Co. Meath) and Camross (Co. Laois), as well as a monastery at Nurney, County Carlow of which an early high cross survives.[14]

The Bollandists argued that the Abbán of Mag Arnaide and the Abbán of Cell Abbáin were originally two distinct saints, one commemorated on 16 March, the other on 27 October, but that the two were conflated from an early period.[15] This conclusion, however, has been rejected by scholars like W.W. Heist and Charles Plummer.[15]

There is also a brief biographical reference to Saint Abbán in the official hagiographical compilation of the Orthodox Church, The Great Synaxaristes, for 13 May.[2] This source states that he was baptised in 165 AD, became a missionary in the Abingdon area of England, and reposed in peace.

The Life puts forward the spurious claim that Abingdon, the town near Oxford, is to be explained etymologically as Abbain dun, "Abbán's town". The aetiological tale goes that the town took its name from the saint, because he had successfully converted the king and the people of the area.[3][16] The story was not an isolated one. The etymology is also brought up by the author who revised the 12th-century chronicle of the house, Historia Ecclesie Abbendonensis ("The History of the Church of Abingdon"). As Abingdon Abbey lay in a valley, he prefers the Irish derivation: "For we have learnt from our contemporaries that, according to the language of the Irish, Abingdon is interpreted 'house of Aben'; but according to the language of the English, Abingdon commonly means 'the hill of Aben'."[17]

Pádraig Ó Riain proposes that the episode in the saint's Life was intended to offer some counterweight against English propaganda which asserted that the need for religious and ecclesiastical guidance justified English presence in Ireland; and that, in fact, the linguistic convenience was what made the saint of an otherwise minor church such a suitable protagonist.[3] More specifically, Ailbe may have written his Life in response to his quarrel with William Earl Marshall, who had seized two manors near New Ross, and Normans rather than Irishmen may have been his target audience.[18] It has been argued that the formative occasion for the story was a visit to Abingon made in 1080 by Lorcán Ua Tuathail (Lawrence O'Toole), Archbishop of Dublin, who stayed there for three weeks before accompanying Henry II to Normandy. Ailbe, being one of the archbishop's disciples, may have been present.[17]

His entries in the Félire Óengusso praise him as an "angelic bush of gold" (doss óir ainglech) and "an abbot fair and train-having" (abb cain clíarach).[6]

Retrieved from "https://en.wikipedia.org/w/index.php?title=Abbán&oldid=971343193"
Categories:
Hidden categories:
The article is a derivative under the Creative Commons Attribution-ShareAlike License. A link to the original article can be found here and attribution parties here. By using this site, you agree to the Terms of Use. Gpedia Ⓡ is a registered trademark of the Cyberajah Pty Ltd.