(Redirected from Acquisition Corps)
Jump to navigation Jump to search

The United States Army Acquisition Corps (AAC) is the officer corps of the United States Army Acquisition Workforce (AAW).[1][2] The Acquisition Corps is composed of army officers who serve in acquisition, a specialized form of product development, fielding, and support.[3] These officers begin their careers in the other branches of the army for eight years, after which they may elect the Acquisition branch as their career as assistant program managers (APMs), program managers (PMs), and program executive officers (PEOs). (A PEO can be civilian.) Four percent of the 40,000 members of the army acquisition workforce are army officers;[4] the remainder are largely civilians, with some contingency contracting NCOs for urgent or emergency contracts.[1]

The director of the Army Acquisition Corps, currently a lieutenant general, also serves as principal military deputy (PMILDEP) to the Assistant Secretary of the Army for Acquisition, Logistics, and Technology or ASA(ALT). The PMILDEP is also director of combat systems for Army Futures Command (AFC), by Army Directive 2018-15.[5][6] The Office of ASA(ALT) has a direct reporting unit (DRU) which is denoted the U.S. Army Acquisition Support Center (USAASC). An office within USAASC, DACM ensures the professional development of the Acquisition Workforce as well as the officer corps itself, including the recruitment of suitable captains and majors into the pipeline of courses at Defense Acquisition University (DAU). DAU certifies the 150,000-member Defense Acquisition Workforce, including the Army's Acquisition workforce of 40,000 civilians, officers, and NCOs (MOS 51C).[1]

The Acquisition Corps was instituted in 1989 by Chief of Staff Carl Vuono.[7] Vuono's goal was to professionalize the Acquisition workforce.

During the post-9/11 period, the US Army was preoccupied with counter-insurgencies, leaving its competitors free to develop new weapon systems. In order to address this need for modernization, the Army Futures Command (AFC) was instituted in 2018.[8] AFC's approach to modernization is to clarify the engineering of a candidate system before it becomes a Program of Record in the Acquisition process. "Our new approach is really to prototype as much as we can to help us identify requirements, so our reach doesn’t exceed our grasp. ... A good example is Future Vertical Lift: The prototyping has been exceptional." —Secretary of the Army Mark Esper[9] 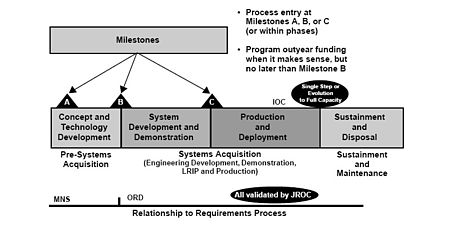 DoD (2007) Acquisition process denoting Milestones A, B, C along a timeline. When a milestone has been met, the triangle then points downward, at this time. Otherwise the milestone is planned, but not yet met at this time.

For a Program of Record,[10] the Acquisition Life Cycle is

The Acquisition process has existed for centuries,[16] but has historically been beset by dysfunctional response to change.[17]: Minute 19:40 [18] The US Army has not fielded a new weapon system in decades.[19][20][21] The Acquisition process is in need of reform, as noted by Senator John McCain to General Mark Milley, during Milley's confirmation hearings as Army Chief of Staff.[22]:minute 7:30 A series of Acquisition reforms[16] has attempted to address these problems, not the least of which is an impending funding shortfall in 2020. Secretary Esper scrubbed through 800[23] modernization programs to reprioritize funding[24] for the top 6 modernization priorities,[25] which will consume 80% of the modernization funding of the army,[26] of 18 systems.[26] The Budget Control Act will restrict funds by 2020.[27][28][29][30][31][32][33][34][35] One issue is that Acquisition leadership gets unreadable reports, according to the GAO.[36]

A succession of Army Secretaries and Army Chiefs of Staff have instituted reforms, or else project cancellations, in response.[7]

The 2018 approach is to prototype and experiment (before Milestone B, for Army Acquisition)[10]:Army Regulation (AR 70–1) before the Materiel Development Decision.

The Army's modernization priorities of 2018, and its Cross-functional teams (CFTs), are found in the Army Futures Command (AFC):

The last two CFTs are cross-cutting over multiple domains.

From the viewpoint of Futures Command, a quick failure is preferable to a long, drawn-out failure. The ASA(ALT) Bruce Jette has cautioned the acquisition community to 'call-out' unrealistic processes which commit a program to a drawn-out failure,[36] rather than failing early, and seeking another solution.[37] A cancellation with harvestable content is not a total loss. In the Department of Defense, the materiel supply process was underwritten by the acquisition, logistics, and technology directorate of the Office of the Secretary of Defense (OSD), with a deputy secretary of defense (DSD) to oversee five areas, one of them being acquisition, logistics, and technology (ALT).[38] ALT is overseen by an under secretary of defense (USD).[39] But as of 2018 the DoD under secretary (USD) for ALT is participating in a reorganization of the DoD Acquisition process.[40] (See: Joint Capabilities Integration and Development System (JCIDS), and Analysis of Alternatives) Dr. Jette points out that the army, by using middle-tier acquisition, has been exempted from the DoD 5000 and JCIDS procedures and is allowed to use rapid prototyping.[41]:minute 17:10

The modernization of the combat systems of the US Army in a timely way is the goal of Futures Command, established in 2018. AFC uses Cross-functional teams (CFTs) to downselect prospective requirements from the myriad solutions that might possibly feed into the Acquisition process. Each CFT addresses one of a manageable number of priorities set by the secretary and Chief of Staff of the Army. A CFT is a team of teams, at base a small co-located team of experts, each expert reaching back to their respective team when necessary, for additional knowledge on requirements, acquisition, science and technology, test, resourcing, costing, and sustainment. Each CFT experiments on, and tests, prototypes to learn what is doable in a timely way. Each prototype is expected to reach Milestones: A, B, C, .. until a Materiel Development Decision (MDD) can be made, whether or not to admit a Combat system into the Acquisition process. Otherwise a prototype is discarded or divested from the modernization portfolio.

The current acquisition system has pieces all throughout the Army. ... There’s chunks of it in TRADOC and chunks of it in AMC and then other pieces. So really all we’re trying to do is get them all lined up under a single command…..from concept, S&T, RDT&E, through the requirements process, through the beginnings of the acquisition system — Milestone A, B, and C — ….aligned under that same commander. ... We will finally achieve… unity of command — Secretary Esper.[42]

The ASA(ALT) is the Acquisition executive (AAE). By statute, an MDD is ultimately the decision of the Acquisition executive (because the AAE, with the concurrence of the Chief of Staff of the Army, has Milestone Decision Authority —MDA),[5][43] who jointly might delegate the details of that materiel development decision to the PMILDEP or PEO. The PMILDEP has found CFTs to be so useful that he has recommended that each PEO find a CFT as soon as possible (in 2018).[44]

Retrieved from "https://en.wikipedia.org/w/index.php?title=United_States_Army_Acquisition_Corps&oldid=895138337"
Categories:
The article is a derivative under the Creative Commons Attribution-ShareAlike License. A link to the original article can be found here and attribution parties here. By using this site, you agree to the Terms of Use. Gpedia Ⓡ is a registered trademark of the Cyberajah Pty Ltd.