Jump to navigation Jump to search
Mountain range in northeastern New York, US
For the state park that covers the same area, see Adirondack Park.

The Adirondack Mountains (/ædɪˈrɒndæk/) form a massif in northeastern New York, United States. Its boundaries correspond roughly to the boundaries of Adirondack Park. The mountains form a roughly circular dome, about 160 miles (260 km) in diameter and about 1 mile (1,600 m) high. The current relief owes much to glaciation.

The word Adirondack is thought to come from the Mohawk word 'ha-de-ron-dah' meaning 'eaters of trees.' The earliest written use of the name, spelled Rontaks, was in 1729 by the French missionary Joseph-François Lafitau. He explained that the word was used by the Iroquoians as a derogatory term for groups of Algonquians who did not practice agriculture and therefore sometimes had to eat tree bark to survive harsh winters. As the Mohawks had no written language at the time, Europeans used various phonetic spellings of the word, including Achkokx, Rondaxe, and Adirondax.[1] Such words were strongly associated with the region, but they were not yet considered a place name -- an English map from 1761 labels the area simply Deer Hunting Country. In 1837, the mountains were named Adirondacks by Ebenezer Emmons.[2] 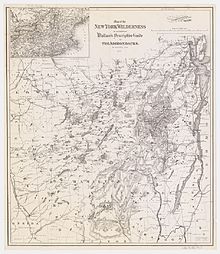 1876 map of the Adirondacks, showing many of the now obsolete names for many of the peaks, lakes, and communities.

Humans have lived in the region of the Adirondack Mountains since the Paleo-Indian period, (15,000 to 7,000 BC) shortly after the last ice age. The first group to move into the area came south from the St. Lawrence River Valley and settled along the shores of the Champlain Sea around 13,000 BC.[3] These people, known as the Laurentian culture, were semi-nomadic hunter-gatherers. Evidence for their presence in the Adirondacks includes an arrowhead of red-brown chert found in 2007 at the edge of Tupper Lake. Over the next 11,000 or so years, the region's climate slowly warmed, and forests began to replace the original tundra.[3] Several different cultures -- known as the Sylvan Lake, River, Middlesex, Point Peninsula, and Owasco cultures -- replaced the Laurentian culture over time.[4] By the time of the Owasco culture, around 0 AD, maize and beans were being cultivated in the Adirondack uplands.[3]

The first Iroquoian peoples -- the Mohawk (or Kanyengehaga) and the Oneida (or Oneyotdehaga) -- arrived in the Adirondack region between 4,000 and 1,200 years ago. Both groups claimed the Adirondack Mountains as hunting grounds. According to Haudenosaunee historian Rick Hill, the region was considered a 'Dish with One Spoon,' symbolizing shared hunting resources between the groups. A group of Algonquian people, known as the Mahicans, also occupied the region, particularly the Hudson River Valley.[4]

These were the groups that the first European explorers of the area encountered. European colonization of the area began with a battle between Samuel de Champlain and a group of Mohawks, in what is now Ticonderoga in 1609. The Jesuit missionary Isaac Jogues became the first recorded European to travel through the center of the Adirondacks -- as the captive of a Mohawk hunting party -- in 1642.[5]

The early European perception of the Adirondacks was of a vast, inhospitable wilderness. One map of the area from 1771 shows the region as a blank space in the northeastern corner of New York. In 1784, Thomas Pownhall wrote that the Native Americans referred to the area as "the Dismal Wilderness, or the Habitation of Winter," and that the area was "either not much known to them, or, if known, very wisely by them kept from the Knowledge of the Europeans."[6] He clearly had the impression that native people did not live within the Adirondack mountains. Because local Iroquoian and Algonquian tribes had been decimated first by smallpox and measles in the 1600s, then by wars with encroaching European settlers, there likely were very few people living in the region by the time Pownhall wrote his description. It is only relatively recently that numerous archaeological finds have definitively shown that Native Americans were very present in the Adirondacks before European contact, hunting, making pottery, and raising maize and beans.[3]

The European impression of a wild region devoid of human connection set up a narrative about wilderness that would persist through the next 200-some years of the region's history. While society's perception of the Adirondacks' value changed, they were always seen as a land of natural resources and physical beauty, not of human history.[3] First the area was an inhospitable tangle, then a lucrative store of lumber.[6] After the American Revolutionary War, New York State gained ownership of most of the land in the region. Needing money to discharge war debts, the government sold nearly all the original public acreage about 7 million acres for pennies an acre. Lumbermen were welcomed to the interior, with few restraints, resulting in massive deforestation.[7] Later, the wilderness character of the region became popular with the rise of the Romantic movement, and the Adirondacks became a destination for those wishing to escape the evils of city life. Rising concern over water quality and deforestation led to the creation of the Adirondack Park in 1885.[6] In 1989, part of the Adirondack region was designated by UNESCO as the Champlain-Adirondack Biosphere Reserve.[8]

For the more recent human history of the Adirondack region, see the page Adirondack Park. 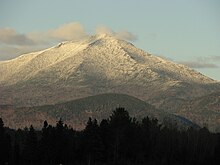 Whiteface Mountain is the fifth-highest mountain in the U.S. state of New York, and one of the High Peaks of the Adirondack Mountains.

The rocks of the Adirondack mountains originated about two billion years ago as 50,000 feet (ca. 15,240 m) thick sediments at the bottom of a sea located near the equator. Because of plate tectonics these collided with Laurentia (the precursor of modern North America) in a mountain building episode known as the Grenville orogeny. During this time the sedimentary rock was changed into metamorphic rock. It is these Proterozoic minerals and lithologies that make up the core of the massif. Minerals of interest include:

Note that even though they all resulted from the Grenville orogeny, neither the Adirondacks (now uplifted by a hot spot) nor the Catskills or Poconos (a dissected plateau formed from delta deposits) are part of the Appalachian Mountain chain (faulted and folded by continental collisions).

Around 600 million years ago, as Laurentia drifted away from Baltica (European Craton), the area began to be pulled apart forming the Iapetus Ocean. Faults developed, running north to northeast which formed valleys and deep lakes. Examples visible today include the grabens Lake George and Schroon Lake. By this time the Grenville mountains had been eroded away and the area was covered by a shallow sea. Several thousand feet of sediment accumulated on the sea bed. Trilobites were the principal life-form of the sea bed, and fossil tracks can be seen in the Potsdam sandstone floor of the Paul Smiths Visitor Interpretive Center.[10]

About 10 million years ago the region began to be uplifted. It has been lifted about 7000 feet (ca. 2,134 meters) and is continuing at about 2 millimeters per year, which is greater than the rate of denudation. The cause of the uplift is unknown, but geologists theorize that it is caused by a hot spot in the earth's crust.[10] A recent study has revealed a column of seismically slow materials about 50-80 km deep beneath the Adirondack Mountains[11], which was interpreted to be the upwelling asthenosphere contributing to the uplift of the mountains. The occurrence of earthquake swarms near the center of the massif at Blue Mountain Lake may be evidence of this. Some of the earthquakes have exceeded 5 on the Richter magnitude scale.

Starting about 2.5 million years ago a cycle of Pleistocene glacial and interglacial periods began which covered the area in ice. During the most recent episode, the Laurentide Ice Sheet covered most of northern North America between about 95,000 and c. 20,000 years ago.[12] After this the climate warmed, but it took nearly 10,000 years for 10,000 feet (ca. 3,048 m) thick layer of ice to completely melt. Evidence of this period includes:

Soils in the area are generally thin, sandy, acidic, and infertile, having developed since the glacial retreat. 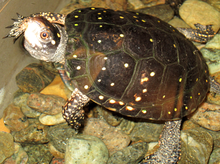 Spotted turtle at the Wild Center.

The Adirondack Mountains form the southernmost part of the Eastern forest-boreal transition ecoregion.[16] They are heavily forested, and contain one of the southernmost distribution taiga in North America. The forests of the Adirondacks include spruce, pine and deciduous trees. Lumbering, once an important industry, has been much restricted by the creation of the park.[17]

The mountains include many wetlands, of which there are three kinds:[10]

Nearly 60 percent of the park is covered with northern hardwood forest. Above 2600 feet (ca. 792 meters) conditions are too poor for hardwoods to thrive, and these trees become mixed with or replaced by balsam fir and red spruce. Above 3500 feet (ca. 1,067 meters) black spruce replace red. Higher still only trees short enough to be covered in snow during the winter can survive.

Only a tiny fraction of the area above the tree line is classified as having an alpine climate.

Scenes from the Adirondacks

Retrieved from "https://en.wikipedia.org/w/index.php?title=Adirondack_Mountains&oldid=960416924"
Categories:
Hidden categories:
The article is a derivative under the Creative Commons Attribution-ShareAlike License. A link to the original article can be found here and attribution parties here. By using this site, you agree to the Terms of Use. Gpedia Ⓡ is a registered trademark of the Cyberajah Pty Ltd.