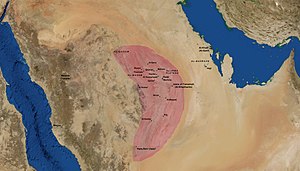 The historical region of Al-Yamamah at its greatest extent, as described by Yaqut (13th century) and Al-Hamadani (10th century), along with some of the region's prominent settlements in pre-Islamic and early Islamic times.

Al-Yamamah (Arabic: اليمامة‎, romanized: al-Yamāmah) is an ancient historical region lying to the east of the plateau of Najd in modern-day Saudi Arabia, or sometimes more specifically, the now-extinct ancient village of Jaww Al-Yamamah, near Al-Kharj, after which the rest of the region was named. Only a handful of centralized states ever arose in Yamamah, but it figured prominently in early Islamic history due to it becoming a central theater in the Ridda Wars immediately following Muhammad's death. The region was gradually subsumed in recent centuries under the term "Najd", which encompasses a larger area. However, the term "Al-Yamamah" still lives on as a nostalgic historical term that is invoked to emphasize the region's ties with its ancient past. The current headquarters of the Saudi government in Riyadh, for example, is known as the Palace of Yamamah.

Salit bin Amri was sent by Muhammad with a letter to Hozah bin Ali to the king of Yamama to invite him to Islam during the Expedition of Zaid ibn Haritha that took place in 628 AD.[1][2]

Retrieved from "https://en.wikipedia.org/w/index.php?title=Al-Yamama&oldid=969287446"
Categories:
Hidden categories:
The article is a derivative under the Creative Commons Attribution-ShareAlike License. A link to the original article can be found here and attribution parties here. By using this site, you agree to the Terms of Use. Gpedia Ⓡ is a registered trademark of the Cyberajah Pty Ltd.