Jump to navigation Jump to search
For the American journalist, see Allen Young (writer). For those of a similar name, see Alan Young (disambiguation).

Sir Allen William Young, CB, CVO (12 December 1827 – 20 November 1915) was an English master mariner and explorer, best remembered for his role in Arctic exploration including the search for Sir John Franklin.

Allen Young was born at Twickenham on 12 December 1827, and went to sea as a midshipman in the merchant marine in 1842. By 1853 he was master of the Blackwall Frigate Marlborough and made two round voyages between England and Australia. During the Crimean War, he was master of the 3,000-ton troop ship Adelaide.

In 1857, Allen Young offered himself as sailing master of the auxiliary steamship Fox under the overall command of Francis Leopold McClintock, that was to search the Franklin expedition, missing since 1845. He also donated 500 pounds to the expedition, and Lady Franklin gratefully accepted his services. The expedition went on to find the only written record of the missing expedition's fate, and Young himself undertook several lengthy overland sled journeys in the search. 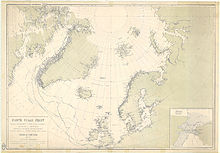 Map of the Pandora expeditions by Allen Young

In 1874 Allen Young purchased the superseded British Royal Navy gunvessel Pandora in order to make a final search for the missing written records of the Franklin expedition, with additional funding from Lady Franklin. The expedition sailed from Southampton late in June 1875, but heavy ice in Peel Sound prevented the vessel from reaching the search area, and the expedition returned unsuccessful. By this time Lady Franklin had died. In 1876 Allen Young took the Pandora on a second voyage to the Arctic with stores to relieve the British Arctic Expedition. Young was knighted in recognition of his services.

Sir Allen Young planned another expedition in Pandora in 1878, but was induced by a sponsor James Gordon Bennett, Jr. to sell the vessel to him. She was renamed Jeannette for a United States Arctic expedition, and subsequently wrecked with heavy loss of life.

In 1884 Sir Allen Young was commissioned to take the steamship Hope in search of Benjamin Leigh Smith's expedition missing in Franz Josef Land, north of Russia. He successfully located the expeditioners early in August, to learn that their vessel Eira had been crushed by ice and sunk on 21 August 1883.

In 1885 Sir Allen Young was master of the hospital ship Stella supporting British military actions in the Soudan.[1]

During 1886-87 Sir Allen Young proposed and lobbied for leadership of a British Antarctic Expedition, but adequate financial support failed to materialise.[2]

Sir Allen Young is also remembered for a dinner party he held in London on 24 May 1877 at which the Prince of Wales, subsequently Edward VII of the United Kingdom, arranged to sit next to his mistress Lillie Langtry while her husband was discreetly seated elsewhere.

Retrieved from "https://en.wikipedia.org/w/index.php?title=Allen_Young&oldid=960147914"
Categories:
Hidden categories:
The article is a derivative under the Creative Commons Attribution-ShareAlike License. A link to the original article can be found here and attribution parties here. By using this site, you agree to the Terms of Use. Gpedia Ⓡ is a registered trademark of the Cyberajah Pty Ltd.