Location of the Altiplano in South America

La Paz, Bolivia, is the largest city located in the Altiplano

The Altiplano (Spanish for "high plain"), Collao (Quechua and Aymara: Qullaw, meaning "place of the Qulla") or Andean Plateau, in west-central South America, is the area where the Andes are the widest. It is the most extensive area of high plateau on Earth outside Tibet. The bulk of the Altiplano lies in Bolivia, but its northern parts lie in Peru, and its southern parts lie in Chile and Argentina.

The plateau hosts several cities of these four nations, including El Alto, La Paz, Oruro, and Puno. The northeastern Altiplano is more humid than the southwestern area. The latter area has several salares, or salt flats, due to its aridity. At the Bolivia–Peru border lies Lake Titicaca, the largest lake in South America. South of that in Bolivia was Lake Poopó, which was declared dried up and defunct as of December 2015. It is unclear if this second-largest lake in Bolivia can be revitalized.[1][2]

The Altiplano was the site of several pre-Columbian cultures, including the Chiripa, Tiawanaku and the Inca Empire. Spain conquered the region in the 16th century.

Major economic activities in the Altiplano include mining, llama and vicuña herding, and services in the cities. There is some international tourism. 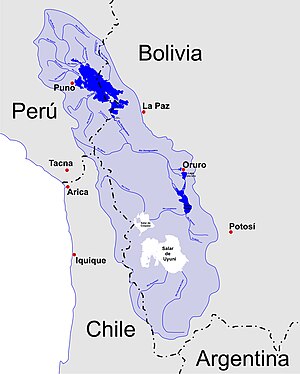 A map of the endorheic river basins that characterize the altiplano. In the north is Lake Titicaca and the Desaguadero River system; in the south is the Salar de Uyuni salt flat. The non-endorheic altiplano extends southward into Argentina and Chile.

The Altiplano is noted for hypoxic air caused by very high elevation.

At various times during the Pleistocene epoch, both the southern and northern Altiplano were covered by vast pluvial lakes. Remnants are Lake Titicaca, straddling the Peru–Bolivia border, and Poopó, a salt lake that extends south of Oruro, Bolivia. Salar de Uyuni, locally known as Salar de Tunupa, and Salar de Coipasa are two large dry salt flats formed after the Altiplano paleolakes dried out. 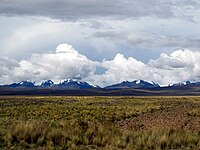 The Bolivian Altiplano at about 4,250 m (14,000 feet). The snow-covered peaks of the Cordillera Real rise in the background.

The term Altiplano is sometimes used to identify the altitude zone and the type of climate that prevails within it: it is colder than that of the tierra fría but not as cold as that of the tierra helada. Scientists classify the latter as commencing at an elevation of approximately 4,500 meters (or about 15,000 feet). Alternate names used in place of altiplano in this context include puna and páramos.

The coldest temperatures occur in the southwestern portion of the Altiplano during the winter months of June and July. The seasonal cycle of rainfall is marked, with the rainy season concentrated between December and March. The rest of the year tends to be very dry, cool, windy and sunny. Snowfall may happen between April and September, especially to the north, but it is not very common (between one and five times a year). 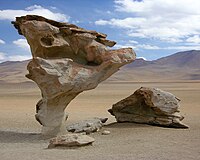 Several mechanisms have been put forth for the formation of the Altiplano plateau; hypotheses try to explain why the topography in the Andes incorporates this large area of low relief at high altitude (high plateau) within the orogen:

Retrieved from "https://en.wikipedia.org/w/index.php?title=Altiplano&oldid=960960038"
Categories:
Hidden categories:
The article is a derivative under the Creative Commons Attribution-ShareAlike License. A link to the original article can be found here and attribution parties here. By using this site, you agree to the Terms of Use. Gpedia Ⓡ is a registered trademark of the Cyberajah Pty Ltd.