American Specialty Cars (commonly known as ASC or American Sunroof Company) was an automobile supplier of highly engineered and designed roof systems, body systems and other specialty-vehicle systems for the world’s automakers. The company was headquartered in Warren, Michigan, in the United States and was one of several coach convertible builders. ASC sold assets to its Creative Services division in late 2016 to Roush Industries. In late June 2017, ASC effectively ceased operations, laying off all staff and had tooling and production equipment removed from the manufacturing plant in Lexington, Kentucky.

The company was founded by Heinz Prechter in Los Angeles, California as the American Sunroof Company in 1965.[citation needed] The company soon expanded its operations into Detroit by 1967. The company first supplied OEM services for the Ford Motor Company's 1968 Mercury Cougar XR-7.[citation needed]

In the industry, ASC became well known for converting standard coupe automobiles into convertibles on an OEM basis.[citation needed] The company also engineers convertible tops for automakers to build themselves. Other original-equipment firsts for ASC include the mobile video system (on the Chevrolet Venture) and the powered sunroof.

The company changed its name from American Sunroof Company, in 2004, to highlight its new corporate focus on being a complete specialty-vehicle development partner for the world’s automakers.

All employees were terminated June 27, 2017 and ceased operations. Major manufacturing operations were sourced to other suppliers, mainly Toyota and FCA, effectively shutting down production operations. 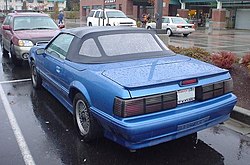 Retrieved from "https://en.wikipedia.org/w/index.php?title=American_Specialty_Cars&oldid=914946610"
Categories:
Hidden categories:
The article is a derivative under the Creative Commons Attribution-ShareAlike License. A link to the original article can be found here and attribution parties here. By using this site, you agree to the Terms of Use. Gpedia Ⓡ is a registered trademark of the Cyberajah Pty Ltd.