American official war artists have been part of the American military since 1917. Artists are unlike the objective camera lens which records only a single instant and no more. The war artist captures instantaneous action and conflates earlier moments of the same scene within one compelling image.[1]

In World War I, eight artists commissioned as captains in the U.S. Corps of Engineers. These men were sent to Europe to record the activities of the American Expeditionary Forces.[3]

In 1941, the Navy Combat Art Program was founded in order to ensure that competent artists would be present at the scene of history-making events. Eight active duty artists developed a record of all phases of World War II; and all major naval operations have been depicted by Navy artists. During the Korean War, the program was revived with two military artists in combat contexts. Since then, artists have been sent to other combat zones, including the Persian Gulf.[1]

The Army's Vietnam Combat Art Program was started in 1966. Teams of soldier-artists created pictorial accounts and interpretations for the annals of army military history. These teams of five soldier-artists typically spent 60 days of temporary duty (TDY) in Vietnam embedded with various units. The U. S. Army Center of Military History (CMH) currently includes an Army Art Collection with about 40 representative war artists.[4]

In 1992, the Army Staff Artist Program was attached to the United States Army Center of Military History. Army artists are a permanent part of the Museum Division's Collections Branch.[3]

There are significant differences in the artwork created by the branches of the U.S. military: 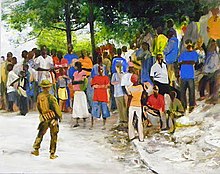 Rice distribution at Carrefour in Haiti after the earthquake in 2010. Oil sketch by Sgt. Kristopher Battles, USMC

Military art and the work of American military artists includes both peacetime and wartime. For example, USMC combat artist Kristopher Battles deployed with American forces in Haiti to provide humanitarian relief as part of Operation Unified Response after the disastrous earthquake in 2010.[5]

This is a dynamic list and may never be able to satisfy particular standards for completeness. You can help by expanding it with reliably sourced entries.

Retrieved from "https://en.wikipedia.org/w/index.php?title=American_official_war_artists&oldid=947675367"
Categories:
Hidden categories:
The article is a derivative under the Creative Commons Attribution-ShareAlike License. A link to the original article can be found here and attribution parties here. By using this site, you agree to the Terms of Use. Gpedia Ⓡ is a registered trademark of the Cyberajah Pty Ltd.