Andrew Hull Foote (September 12, 1806 – June 26, 1863) was an American naval officer who was noted for his service in the American Civil War and also for his contributions to several naval reforms in the years prior to the war. When the war came, he was appointed to command of the Western Gunboat Flotilla, predecessor of the Mississippi River Squadron. In that position, he led the gunboats in the Battle of Fort Henry. For his services with the Western Gunboat Flotilla, Foote was among the first naval officers to be promoted to the then-new rank of rear admiral.[a]

Foote was born at New Haven, Connecticut, the son of Senator Samuel A. Foot (or Foote) and Eudocia Hull.[1] As a child Foote was not known as a good student, but showed a keen interest in one day going to sea.[2] His father compromised and had him entered at the United States Military Academy at West Point, New York.[3] Six months later in 1822, he left West Point and accepted an appointment as a midshipman in the United States Navy.[3]

Between 1822 and 1843, Foote saw service in the Caribbean, Pacific, and Mediterranean, African Coast and at the Philadelphia Navy Yard. He first began as a midshipman on USS Grampus. In 1830, he was commissioned a lieutenant, and was stationed in the Mediterranean.[2] In 1837, Foote circumnavigated the globe in USS John Adams. After serving on sea, Foote was put in charge of the Philadelphia Naval Asylum. After serving on land he went back to sea, and organized a Temperance Society aboard USS Cumberland.[2] This group developed into a movement that resulted in ending the policy of supplying grog to U.S. Naval personnel.[4] 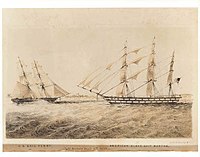 From 1849 to 1851, Foote commanded USS Perry, cruising the waters off the African coast. He was active in suppressing the slave trade there.[2] This experience persuaded him to support the cause of abolition, and in 1854, he published a 390 page book, Africa and the American Flag. In this book, Admiral Foote described the geography of the African continent, the customs of many of the African people, the establishment of American colonies in Africa, the slave-trade and its evils and the need to protect American citizens and commerce abroad. He also became a frequent speaker on the Abolitionist circuit.[2]

Foote was promoted to Commander in 1856, and took command of USS Portsmouth in the East India Squadron. With this command, Foote was assigned the mission of observing British operations against Canton, China, during the Second Opium War. This eventually resulted in his being attacked from Chinese shore batteries.[2] Foote led a landing party that seized the barrier forts along the Pearl River in reprisal for the attack.[5] This led to a short occupation by the U.S. Navy of Chinese territory.[2]

Foote returned to the Continental United States in 1858, and took command of the Brooklyn Navy Yard, in Brooklyn, New York, a post he held until the outbreak of the hostilities of the Civil War.[2]

When the American Civil War began in 1861, Foote was in command of the New York Navy Yard. On June 29, 1861 Foote was promoted to captain. From 1861 to 1862, Foote commanded the Mississippi River Squadron with distinction, organizing and leading the gunboat flotilla in many of the early battles of the Western Theater of the American Civil War. Even though Foote was an officer in the United States Navy, the Western Flotilla was under the jurisdiction of the Union Army. In early February 1862, now holding the rank of flag officer (equivalent to the modern commodore), he cooperated with General Ulysses S. Grant against Fort Henry on the Tennessee River. Despite heavy damage to one of the gunboats, Foote was able to quickly subdue the fort. Several days later Grant, with three divisions, and Foote with his fleet of ironclads, along with the assistance of Captain Seth Ledyard Phelps and his fleet of timberclad warships, moved against Fort Donelson on the Cumberland River. Hoping for a repeat of the success at Fort Henry, General Grant urged Foote to attack the fort's river batteries. Fort Donelson's guns, however, were better-placed than Fort Henry's were. Three of Foote's gunboats were damaged including the flagship, USS St. Louis. Foote himself received a wound in his foot.[6] For his service at Forts Henry and Donelson, Foote received the Thanks of Congress. After repairing his flotilla, Foote joined with General John Pope in a campaign against Island Number Ten on the Mississippi River. In July 1862 Foote received a second Thanks of Congress, this time for the battles of Fort Henry, Fort Donelson and Island Number Ten.[7]

Later in 1862, Foote was promoted to rear admiral.[2] In 1863, on his way to take command of the South Atlantic Blockading Squadron, he suddenly died. His untimely death in New York shocked the nation.[8] He was interred at Grove Street Cemetery in New Haven.[9]

Retrieved from "https://en.wikipedia.org/w/index.php?title=Andrew_Hull_Foote&oldid=904578007"
Categories:
Hidden categories:
The article is a derivative under the Creative Commons Attribution-ShareAlike License. A link to the original article can be found here and attribution parties here. By using this site, you agree to the Terms of Use. Gpedia Ⓡ is a registered trademark of the Cyberajah Pty Ltd.