Jump to navigation Jump to search
"Appropriations Clause" redirects here. For a worldwide view of the subject, see Appropriation bill.
Bills and laws to spend money 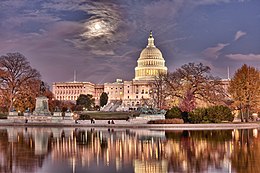 Appropriations bills are one part of a larger United States budget and spending process. They are preceded in that process by the president's budget proposal, congressional budget resolutions, and the 302(b) allocation. Article I, section 9, clause 7 of the U.S. Constitution states that "No money shall be drawn from the Treasury, but in Consequence of Appropriations made by Law..." This is what gives Congress the power to make these appropriations. The President, however, still has the power to veto appropriations bills.[2] However, the President does not have line-item veto authority so that he must either sign the entire bill into law or veto it.

Traditionally, regular appropriations bills have provided most of the federal government's annual funding.[4] The text of the bill is divided into "accounts" with some larger agencies having several separate accounts (for things like salaries or research/development) and some smaller agencies just having one.[4] The appropriations bill provides a specified amount of money for each individual account, and can also include conditions or restrictions on the use of the money.[4]

Agencies cannot move money from one account to another without permission from Congress (or having the president declare a national emergency), which can be found in some appropriations bills.[4] These are known as transfers. Agencies can shift some of the funding around to different activities within the same account, known as reprogramming.[4] The appropriations subcommittees oversee such changes.

Occasionally Congress packages several of the twelve appropriations bills into one larger bill called an omnibus spending bill or an omnibus appropriation measure. Often the bills are considered separately at the beginning and get combined later because inability to pass bills individually has led to the exigency of a potential government shutdown.[4] Omnibus bills can "veto-proof" items: measures that the president would otherwise veto can be passed by folding them into an omnibus bill, the vetoing of which would be perceived as harmful.[5]

When a new fiscal year starts on October 1 and Congress has not passed some or all of the regular appropriations bills, Congress may extend their funding and budget authority based on the previous year, with possible minor modifications, using a continuing resolution.[2] If all twelve regular appropriations bills have been passed, a continuing resolution is not necessary.

Continuing resolutions typically provide funding at a rate or formula based on the previous year's funding.[6] The funding extends until a specific date or regular appropriations bills are passed, whichever comes first. There can be some minor changes to some of the accounts in a continuing resolution.[7]

This is an outline of major appropriations bills which were ultimately passed into law.

This article incorporates public domain material from websites or documents of the United States Government.

Retrieved from "https://en.wikipedia.org/w/index.php?title=Appropriations_bill_(United_States)&oldid=963442287"
Categories:
Hidden categories:
The article is a derivative under the Creative Commons Attribution-ShareAlike License. A link to the original article can be found here and attribution parties here. By using this site, you agree to the Terms of Use. Gpedia Ⓡ is a registered trademark of the Cyberajah Pty Ltd.