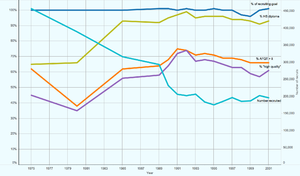 The Armed Services Vocational Aptitude Battery (ASVAB) is a multiple choice test, administered by the United States Military Entrance Processing Command, used to determine qualification for enlistment in the United States Armed Forces. It is often offered to U.S. high school students when they are in the 10th, 11th and 12th grade, though anyone eligible for enlistment may take it.[2]

The ASVAB was first introduced in 1968 and was adopted by all branches of the military in 1976. It underwent a major revision in 2002. In 2004, the test's percentile rank scoring system was renormalized, to ensure that a score of 50% really did represent doing better than exactly 50% of the test takers.

The ASVAB currently contains 9 sections (except the written test, which contains 8 sections). The duration of each test varies from as low as ten minutes up to 36 minutes for Arithmetic Reasoning; the entire ASVAB is three hours long. The test is typically administered in a computerized format at Military Entrance Processing Stations, known as MEPS, or at a satellite location called a Military Entrance Test (MET) site. The ASVAB is administered by computer at the MEPS, while a written version is given at most MET sites. Testing procedures vary depending on the mode of administration.[3]

AFQT Scores are divided into the following categories

-The VE (verbal) score is determined by adding the raw scores from the PC and WK tests and using a table to get the VE score from that combined PC and WK raw score.

-The minimum score for enlistment varies according to branch of service and whether the enlistee has a high school diploma.

GED holders who earn 15 college credits 100 level or greater are considered equivalent with those holding high school diplomas, so that they need only the Tier I score to enlist. Eligibility is not determined by score alone. Certain recruiting goal practices may require an applicant to achieve a higher score than the required minimum AFQT score in order to be considered for enlistment. Rules and regulations are subject to change; applicants should call their local recruiting center for up to date qualification information.[4][5]

Law prohibits applicants in Category V from enlisting.[6] In addition, there are constraints placed on Category IV recruits; recruits in Category IV must be high school diploma graduates but cannot be denied enlistment solely on this criteria if the recruit is needed to satisfy established strength requirements. Furthermore, the law constrains the percentage of accessions who can fall between Categories IV-V (currently, the limit is 20% of all persons originally enlisted in a given armed force in a given fiscal year).[6]

In addition to the ASVAB's AFQT, each branch has military occupational specialty, or MOS, scores. Combinations of scores from the nine tests are used to determine qualification for a MOS. These combinations are called "aptitude area scores", "composite scores", or "line scores". Each of the five armed services has its own aptitude area scores and sets its own minimum composite scores for each MOS.

The AFQT has been used in non-military settings as a proxy measure of intelligence, for example, in Herrnstein & Murray's book The Bell Curve. Because of the test's significance both inside and outside military settings, it is important to examine what the test measures, i.e. to evaluate the construct validity of the AFQT. Kaufman's 2010 review stated that David Marks (2010) scanned the literature for datasets containing test estimates for populations or groups taking both the AFQT and tests of literacy. One study on nine groups of soldiers differing in job and reading ability found a correlation of .96 between the AFQT and reading achievement (Sticht, Caylor, Kern, & Fox, 1972). Another study showed significant improvements among black and Hispanic populations in their AFQT scores between 1980 and 1992 while whites only showed a slight decrement (Kilburn, Hanser, & Klerman, 1998). Another study obtained reading scores for 17-year olds for those same ethnic groups and dates (Campbell et al., 2000) and found a correlation of .997 between reading scores and AFQT scores. This nearly perfect correlation was based on six pairs of data points from six independent population samples evaluated by two separate groups of investigators. According to Marks, "On the basis of the studies summarized here, there can be little doubt that the Armed Forces Qualifications Test is a measure of literacy." However, it is important to note that AFQT has been shown to correlate more highly with classic IQ tests than they do with one another, and that the "crystallized" intelligence measured by AFQT is measured very similarly by Wechsler, in particular.[8]

Retrieved from "https://en.wikipedia.org/w/index.php?title=Armed_Services_Vocational_Aptitude_Battery&oldid=954868320"
Categories:
Hidden categories:
The article is a derivative under the Creative Commons Attribution-ShareAlike License. A link to the original article can be found here and attribution parties here. By using this site, you agree to the Terms of Use. Gpedia Ⓡ is a registered trademark of the Cyberajah Pty Ltd.