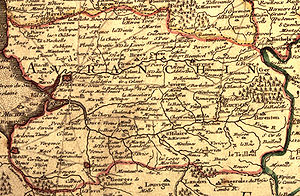 The Avranchin is an area in Normandy, France corresponding to the territory of the Abrincatui, a tribe of Celts from whom the city of Avranches, the main town of the Avranchin, takes its name.

In 867, by the Treaty of Compiègne, Charles the Bald gave the Avranchin to Salomon, King of Brittany. In 933, it was reunited with the Duchy of Normandy by William I of Normandy.

Retrieved from "https://en.wikipedia.org/w/index.php?title=Avranchin&oldid=933780142"
Categories:
Hidden categories:
The article is a derivative under the Creative Commons Attribution-ShareAlike License. A link to the original article can be found here and attribution parties here. By using this site, you agree to the Terms of Use. Gpedia Ⓡ is a registered trademark of the Cyberajah Pty Ltd.