The Battle of Carrizal occurred on the June 21, 1916. It was a major skirmish between United States Army troops of General John J. Pershing's Punitive Expedition and Carrancista troops fought at the town of Carrizal in the Mexican state of Chihuahua.

In June 1916, Gen. Pershing was informed that Pancho Villa could be taken at Carrizal, west of Ahumada.[3] When he sent Captains Boyd and Morey to investigate with C and K troops of the 10th Cavalry, they were confronted by Mexican Army troops, not Villa's men.[2] The Mexican army was ordered by Venustiano Carranza to fire upon any American soldier moving any direction but north. The Americans were issued a warning by the Mexican army.[4] Boyd ordered the men to attack anyway. In the resulting battle, the American attack was repelled.

By legend Villa supposedly watched with delight as his two enemies fought it out with each other. However, this story is of doubtful veracity as Villa was badly injured at the time and being pursued by both the American Army and the federal Carrancistas. The cavalry lost two officers (Charles T. Boyd and Henry R. Adair) and 48 men killed and 24 taken prisoner. The Mexican forces lost 27, including the commanding officer, Gen. Félix Uresti Gómez. General Pershing was furious at this result and asked for permission to attack the Carrancista garrison at Chihuahua. President Wilson, fearing that such an attack would provoke a full-scale war with Mexico, refused. The Battle of Carrizal marked the effective end of the Mexican Expedition. Pancho Villa survived, and small raids on American soil occurred while the expedition was in Mexico. The simultaneous deterioration of German-American relations while World War I raged made any escalation in Mexico undesirable and so negotiations followed. 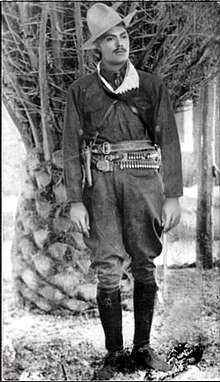 Retrieved from "https://en.wikipedia.org/w/index.php?title=Battle_of_Carrizal&oldid=923558639"
Categories:
Hidden categories:
The article is a derivative under the Creative Commons Attribution-ShareAlike License. A link to the original article can be found here and attribution parties here. By using this site, you agree to the Terms of Use. Gpedia Ⓡ is a registered trademark of the Cyberajah Pty Ltd.