Jump to navigation Jump to search
1918 World War I battle
For the Napoleonic Wars battle, see Battle of Château-Thierry (1814). 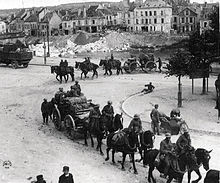 Plaque of commemorative text from the memorial

The Battle of Château-Thierry was fought on 31 May 1918 and was one of the first actions of the American Expeditionary Forces (AEF) under General John J. "Black Jack" Pershing. It was a battle in World War I as part of the Second Battle of the Marne, initially prompted by a German Spring Offensive. German and local actions at Château-Thierry recommenced on 31 May to 22 July 1918, against the AEF, an American Expeditionary Force, consisting of troops from both the United States Army and Marine Corps units. These units were the newest troops on the front in France and just barely out of training.[2]

The AEF counter-offensive combat action at Château-Thierry was relatively brief starting on 18 July 1918 and lasting for less than a week and was part of the allied effort to push back the recent German advance. American forces had linked up with their French allies at the Marne River on 3 June 1918 and had forced the Germans back across the river. This set the stage for the action at Château-Thierry and at Belleau Wood. However, the later action raged for another three weeks.[3]

Despite the revolution in Russia, fortune seemed to favor the Allies with the arrival of the Americans to France. However, these troops needed time to train before they could be combat effective. Recognizing the window of opportunity, General Ludendorff consolidated the manpower freed up from the Eastern Front to conduct Operation Michael in order to split the Allies' lines. The successes of the German stormtrooper infiltration tactics earned Germany approximately 40 miles of territory. But the offensive lost momentum when it surpassed its supply lines.

In 1918, American General Pershing refused to hand over the new American divisions to either the British or French armies, insisting on keeping them together as one army. The exception was the regular Army Buffalo Soldiers who did not participate with the American Expeditionary Forces (AEF) during World War I because they were "Black" or "Colored" (African American) led by mainly white officers. Their experienced colored non-commissioned officers(NCOs) were often provided to other segregated Black volunteer units for combat service – such as the 317th Engineer Battalion. The soldiers of the 92nd and the 93rd infantry divisions were the first Americans to fight in France. The four regiments of the 93rd fought only under French command for the duration of the war.

But in the face of the success of the German onslaught, Pershing relented and sent a portion of his army to assist the French in blocking the German advance in May 1918.[4]:7–10

Looking to defeat the British occupied in Flanders, Ludendorff sought to divert the Allies' French reserves away from the region. In his Operation Blucher, Ludendorff aimed some of his forces at the Chemin des Dames and took the French Sixth Army by surprise. Driving on, the Germans were soon at the Marne River, situated under 50 miles from Paris. With Marshal Ferdinand Foch unable to acquire British assistance, General Pershing's chief of operation, Colonel Fox Conner, recognized the gravity of the situation and ordered the 3rd Division to block them.[4]:39–41[5]

The 3rd Division occupied the main bridge on the south bank of the Marne River that led in Chateau Thierry on 31 May 1918 as the French 10th Colonial Division rendezvoused with them from the north bank. The Americans positioned their machine guns to cover the French retreat, and had a unit led by Lt. John Bissell situated north of the second bridge. The French spent the night adding explosives to the bridges to destroy them. Early the following morning, 1 June, the Germans advanced into Chateau Thierry from the north, forcing the French to the main bridge, which they defended with the support of American machine-gun fire. The French succeeded in destroying the bridge as the Americans kept up their fire on the Germans. Lt. Bissell's group was still on the north side of the Marne. They worked their way back to the secondary bridge in-between American machine-gun fire and made it across, along with a group of Germans that were captured shortly afterwards. From the north of the Marne on 2 June, the Germans engaged in heavy artillery and sniper fire against the Allies. They made an attempt to take the remaining bridge but were forced to end the assault as the casualties rose.[4]:41–42

On the morning of 18 July 1918, the combined French (some of them colonial) and American forces between Fontenoy and Château-Thierry launched a general counter-assault under the overall direction of Allied généralissime Ferdinand Foch against the German positions. This assault on a 40 km (25 mi) wide front was the first in over a year. The American army played a role fighting for the regions around Soissons and Château-Thierry, in collaboration with predominantly French forces. The allied forces had managed to keep their plans a secret, and their attack at 04:45 took the Germans by surprise when the troops went "Over the Top" without a preparatory artillery bombardment, but instead followed closely behind a rolling barrage which began with great synchronized precision. Eventually, the two opposing assaults (lines) inter-penetrated and individual American units exercised initiative and continued fighting despite being nominally behind enemy lines.[6] 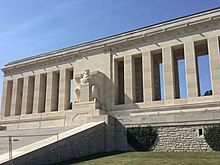 After World War I, a memorial was built on Hill 204, 2 miles (3 km.) west of the town for which it is named. The Château-Thierry Monument, designed by Paul P. Cret of Philadelphia, was constructed by the American Battle Monuments Commission "to commemorate the sacrifices and achievements of American and French fighting men in the region, and the friendship and cooperation of French and American forces during World War I."[7]

There is also a monument in front of the Bronx County Courthouse in New York City that was presented by the American Legion on 11 November 1940. The monument consists of the "Keystone from an arch of the old bridge at Chateau Thierry," which the monument notes was "Gloriously and successfully defended by American troops."[8]

The first Filipino to die in World War I was Private Tomas Mateo Claudio who served with the U.S. Army as part of the American Expeditionary Forces to Europe. He died in the Battle of Chateau Thierry in France on 29 June 1918.[9][10] The Tomas Claudio Memorial College in Morong Rizal, Philippines, which was founded in 1950, was named in his honor.[11]

A chapter in Ken Follett's 2010 historical novel Fall of Giants is devoted to The Battle of Château-Thierry, depicted alternately from the point of view of a German character and an American one. Follett's account emphasizes the fact that the Americans were freshly arrived and for most of them this was the first experience of combat - yet they stood well the "baptism of fire" and were able to confront the far more experienced German troops.

Retrieved from "https://en.wikipedia.org/w/index.php?title=Battle_of_Château-Thierry_(1918)&oldid=964861428"
Categories:
Hidden categories:
The article is a derivative under the Creative Commons Attribution-ShareAlike License. A link to the original article can be found here and attribution parties here. By using this site, you agree to the Terms of Use. Gpedia Ⓡ is a registered trademark of the Cyberajah Pty Ltd.