Jump to navigation Jump to search
For the 1837 battle, see Battle of Galveston Harbor (1837). 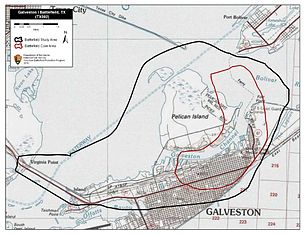 The Battle of Galveston Harbor was a naval engagement between forces from the Union Navy and the Confederate States of America in the American Civil War. It was fought on October 4, 1862.[1][2]

The United States Navy began a blockade of Galveston Harbor in July 1861, but the town remained in Confederate hands for the next fourteen months. At 6:00 am on October 4, 1862, Commander W.B. Renshaw, commanding the blockading ships in the Galveston Bay area, sent USRC Harriet Lane into the harbor flying a flag of truce. The intention was to inform the military authorities in Galveston that if the town did not surrender, the U.S. Navy ships would attack; a one-hour reply would be demanded.[2]

Colonel Joseph J. Cook, Confederate military commander in the area, would not come out to the Union ship or send an officer to receive the communication, so Harriet Lane weighed anchor and returned to the fleet. Four Union steamers, with a mortar boat in tow, then entered the harbor and moved to the same area where Harriet Lane had anchored. Observing this activity, Confederates at Fort Point fired one or more shots and the U.S. Navy ships answered. Eventually, the Union ships disabled the one Confederate gun at Fort Point and fired at other targets.[2]

Two rebel guns from Fort Bankhead also fired at the flotilla but did no damage and were ignored by the Navy. A boat that Colonel Cook had dispatched now approached the Union vessels and two Confederate officers boarded USS Westfield. Renshaw demanded an unconditional surrender of Galveston or he would begin bombarding the town again. Cook refused Renshaw's terms, and conveyed to Renshaw that upon him rested the responsibility of destroying the town and killing women, children, men, and immigrants.[2]

Renshaw threatened to resume the shelling and made preparations for towing the mortar boat into position. One of the Confederate officers then asked if he could be granted time to talk with Colonel Cook again. This officer, a major, negotiated with Renshaw for a four-day truce to evacuate the women, children, from the city. Cook approved the truce, and agreed that if Renshaw would not move troops closer to Galveston, Cook would not permit his men to come below the city.[2]

The agreement was finalized, but never written down, which later caused problems. The Confederates did evacuate, taking all of their weapons, ammunition, supplies, and whatever they could carry with them. Renshaw did not think that the agreement allowed for all this but, in the end, did nothing, due to the lack of a written document.[2]

The fall of Galveston meant that one more important Confederate port was closed to commerce. But the port of Galveston was not shut down for long, as Confederate forces reoccupied the area.[2] The Second Battle of Galveston in January 1863 resulted in a Confederate victory, and the port remained in Southern hands for much of the rest of the war.[3]

Retrieved from "https://en.wikipedia.org/w/index.php?title=Battle_of_Galveston_Harbor_(1862)&oldid=950250923"
Categories:
Hidden categories:
The article is a derivative under the Creative Commons Attribution-ShareAlike License. A link to the original article can be found here and attribution parties here. By using this site, you agree to the Terms of Use. Gpedia Ⓡ is a registered trademark of the Cyberajah Pty Ltd.