Jump to navigation Jump to search
1578 battle during the Eighty Years' War
For the World War II battle, see Battle of Gembloux (1940)

The Battle of Gembloux took place at Gembloux, near Namur, Low Countries, between the Spanish forces led by Don John of Austria (Spanish: Don Juan de Austria),[4] Governor-General of the Spanish Netherlands, and a rebel army composed of Dutch, Flemish, English, Scottish, German, French, and Walloon soldiers under Antoine de Goignies,[5] during the Eighty Years' War and the Anglo-Spanish War (1585–1604).[1][2] On 31 January 1578 the Spanish cavalry commanded by John's nephew, Don Alexander Farnese, Prince of Parma (Italian: Alessandro Farnese, Spanish: Alejandro Farnesio), after pushing back the Netherlandish cavalry, attacked the Netherlandish army, causing an enormous panic amongst the rebel troops.[3] The result was a crushing victory for the Spanish forces.[1][2] The battle hastened the disintegration of the unity of the rebel provinces, and meant the end of the Union of Brussels.[6][7]

After the Sack of Antwerp[8] by Spanish mutineers on 4 November 1576, Catholics and Protestants of the Low Countries concluded the Pacification of Ghent, to remove all Spanish troops.[9] The Spanish tercios were in fact withdrawn to Italy in April 1577, after the new Governor-General of the Spanish Netherlands, the famous Christian knight, and half-brother of Philip II of Spain, Don John of Austria (victor of Lepanto), had signed the Perpetual Edict.[10]

However, in the summer of 1577, Don John of Austria (brandishing the motto In hoc signo vici Turcos, in hoc vincam haereticos)[11] began planning for a new campaign against the Netherlandish rebels, and in July 1577 he took the Citadel of Namur by surprise without a fight. This action further destabilized the uneasy alliance between Catholics and Protestants. From December 1577, John of Austria, still based in Luxembourg, received reinforcements from Spanish Lombardy: some 9,000 battle-hardened Spanish troops under Don Alexander Farnese, Prince of Parma (Duke after the death of his father, Ottavio Farnese, Duke of Parma, in September 1586), complemented by 4,000 troops from Lorraine under Peter Ernst, Count of Mansfeld, and local Walloon troops from Luxembourg and Namur.[12] By January 1578, he had between 17,000 and 20,000 men at his disposal.[12][13]

The Union of Brussels had 25,000 fighting men, but these troops were badly equipped and led, and above all very diverse: Dutch, Flemish, English, Scottish, Walloon, German, and French, and religiously ranging from staunch Catholics to zealous Calvinists.[3]

In the last days of January 1578, the Netherlandish army was camped between Gembloux and Namur. The army was in bad shape, with many sick. Its leaders, George de Lalaing, Count of Rennenberg, Philip de Lalaing, Robert de Melun, and Valentin de Pardieu, were absent because they attended the marriage of the Baron of Beersel and Marguerite de Mérode in Brussels. The command of the army was in the hands of Antoine de Goignies, Seigneur de Vendege.[3] Other notable commanders of the Netherlandish army were the Count of Boussu, Martin Schenck (who after the defeat at Gembloux, enlisted in the Army of Flanders), Emanuel Philibert de Lalaing, Philip, Count of Egmont, William II de La Marck, Lord of Lumey, and Charles Philippe de Croÿ, Marquis d’Havré.[14]

When De Goignies learned that the Spanish army was approaching Namur, he decided to withdraw to Gembloux.[15] 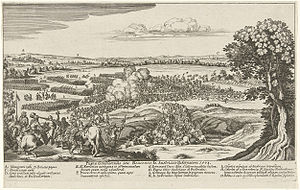 The Battle of Gembloux by Johann Wilhelm Baur

At dawn on 31 January, the Spanish army marched towards the rebel army, with the cavalry under Ottavio Gonzaga in forefront, followed by musketeers and infantry commanded by Don Cristóbal de Mondragón, and then the bulk of the army led by Don John of Austria and Don Alexander Farnese.[11] The rear of the army was left in the hands of the Count of Mansfeld.[11]

The Spanish cavalry had crossed the Meuse River and made contact with the rear of the rebel army. With the bulk of his army still south of the Meuse, John sent messages to his cavalry, now commanded by Alexander, not to approach the enemy too closely until the arrival of rest of the troops.[3] But Alexander, seeing the sorry state of the enemy forces and advised by Mondragón and Gonzaga of the opportunity to surprise the enemy, gave the order to charge. After several clashes with the Spanish cavalry, the Netherlandish cavalry, which was protecting the rear of their forces, fled towards the army, causing an enormous panic amongst the rebel troops.[3] The result was a crushing victory by Parma's cavalry.[15] The entire army's order disintegrated, and the almost unopposed Spanish cavalry massacred fleeing troops.[11][15]

Destruction of the states-general's army

The Netherlandish army tried to regroup, but a cannon and its ammunition blew up, causing many deaths and renewed panic. Meanwhile, part of the rebel troops, mostly Dutch and Scots led by Colonel Henry Balfour, tried to take defensive positions, but could not withstand the musketeers and pikemen led by John, Mondragón, and Gonzaga.[11] The Spanish victory was complete,[16] De Goignies was taken prisoner, along with a large number of his officers,[3] John captured 34 flags and banners[11] and all the artillery and baggage of the enemy, and thousands of rebel soldiers were killed or captured.[3][15] The Spanish casualties, however, were minimal, about 12 dead and a few wounded.[13] Around 3,000 men reached Gembloux and closed the gates, but after negotiations the rebels surrendered to the Spaniards on 5 February and the city was spared from being sacked.[6] 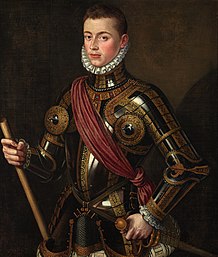 Portrait of Don John of Austria, Governor-General of the Spanish Netherlands.

The defeat at Gembloux forced Prince William of Orange, the leader of the revolt, to leave Brussels, along with its nominal governor, Matthias of Austria (the future Holy Roman Emperor), who had accepted the position of governor-general by the states-general, although he was not recognized by his uncle, Philip II of Spain.[11] The victory of John also meant the end of the Union of Brussels, and hastened the disintegration of the unity of the rebel provinces.[6]

John died nine months after the battle (probably from typhus), on 1 October 1578, and was succeeded by Farnese as governor-general (last desire of John that Philip II confirmed), who at the head of the Spanish army reconquered large parts of the Low Countries in the following years.[4]

Retrieved from "https://en.wikipedia.org/w/index.php?title=Battle_of_Gembloux_(1578)&oldid=995593734"
Categories:
Hidden categories:
The article is a derivative under the Creative Commons Attribution-ShareAlike License. A link to the original article can be found here and attribution parties here. By using this site, you agree to the Terms of Use. Gpedia Ⓡ is a registered trademark of the Cyberajah Pty Ltd.