(Redirected from Battle of Nassau)
Jump to navigation Jump to search
1776 American naval assault
For battles in the same place or in the surroundings, see Battle of Nassau.

The Raid of Nassau (March 1–10, 1776) was a naval operation and amphibious assault by Colonial forces against the British port of Nassau, Bahamas, during the American Revolutionary War (also known as the American War of Independence). The battle is considered one of the first engagements of the newly established Continental Navy and the Continental Marines, the respective progenitors of the United States Navy and Marine Corps. The action was also the Marines' first amphibious landing. It is sometimes known as the "Battle of Nassau".

Departing from Cape Henlopen, Delaware on February 17, 1776, the fleet arrived in the Bahamas on March 1, with the objective of seizing gunpowder and munitions known to be stored there. Two days later the Marines came ashore seizing Fort Montagu at the eastern end of the Nassau harbor, but did not advance to the town where the gunpowder was stored. That night Nassau's governor had most of the gunpowder loaded aboard ships sailing for St. Augustine. On March 4, the Continental Marines advanced and took control of the poorly defended town.

The Continental forces remained at Nassau for two weeks and took away all the remaining gunpowder and munitions found. The fleet returned to New London, Connecticut in early April after capturing a few British supply ships, but failed to capture HMS Glasgow in an action on April 6.

When the American Revolutionary War broke out in 1775, Lord Dunmore, the British provincial governor of the Colony of Virginia, with the British forces under his command, had removed Virginia's store of provincial arms and gunpowder to the island of New Providence in the Crown Colony of the Bahamas, in order to keep it from falling into the hands of the rebel militia. Montfort Browne, the Bahamian governor, was alerted by General Thomas Gage in August 1775 that the rebel colonists might make attempts to seize these supplies.[1]

The desperate shortage of gunpowder available to the Continental Army had led the Second Continental Congress to organize a naval expedition, with the intention of seizing military supplies at Nassau.[2] While the orders issued by the Congress to Esek Hopkins, the fleet captain selected to lead the expedition, included only instructions for patrolling and raiding British naval targets on the Virginia and Carolina coastline, additional instructions may have been given to Hopkins in secret meetings of the Congress' naval committee.[3] The instructions that Hopkins issued to his fleet's captains before it sailed from Cape Henlopen, Delaware, on February 17, 1776, included instructions to rendezvous at Great Abaco Island in the Bahamas.[4]

The fleet that Hopkins launched consisted of Alfred, Hornet, Wasp, Fly, Andrew Doria, Cabot, Providence, and Columbus. In addition to ships' crews, it carried 200 marines under the command of Samuel Nicholas.[5] In spite of gale force winds, the fleet remained together for two days, when Fly and Hornet became separated from the fleet. Hornet was forced to return to port for repairs, and Fly eventually caught up with the fleet at Nassau, after the raid took place. Hopkins did not let the apparent loss of the two ships dissuade him; he had intelligence that much of the British fleet was in port due to the high winds.[6] 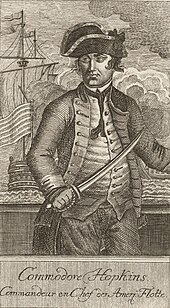 Browne received further intelligence in late February that a rebel fleet was assembling off the Delaware coast, but apparently took no significant actions to prepare a defense.[7] New Providence's harbor had two primary defenses, Fort Nassau and Fort Montagu. Fort Nassau was located in Nassau, but was poorly equipped to defend the port against amphibious attacks, as it had walls that were not strong enough to support the action of its 46 cannons. As a result, Fort Montagu had been constructed in 1742 on the eastern end of the harbor, commanding its entrance. At the time of the raid, it was fortified with 17 cannon,[7] although most of the gunpowder and ordnance was at Fort Nassau.[8]

The fleet arrived at Abaco Island on March 1, 1776. The force captured two sloops owned by Loyalists, one of whom was Captain Gideon Lowe of Green Turtle Cay, and pressed their owners to serve as pilots. George Dorsett, a local ship's captain, got away from Abaco and alerted Browne to the presence of the rebel fleet.[9] The landing force was transferred to the two captured sloops and Providence the next day, and plans were formulated for the assault.[10] While the main fleet held back, the three ships carrying the landing force were to enter the port at daybreak on March 3, and gain control of the town before the alarm could be raised.[11]

The decision to land at daybreak turned out to be a mistake, as the alarm was raised in Nassau when the three ships were spotted in the morning light, rousing Browne from his bed. He ordered four guns fired from Fort Nassau to alert the militia; two of the guns came off their mounts when they were fired.[1][12] At 7:00 a.m. he held a discussion with Samuel Gambier, one of his councilors, over the idea that the gunpowder should be removed from the islands on Mississippi Packet, a fast ship docked in the harbor. They ultimately did not act on the idea, but Browne ordered thirty mostly unarmed militiamen to occupy Fort Montagu before retiring to his house to make himself "a little decent".[11]

When the guns at Fort Nassau were heard by the attackers, they realized the element of surprise was lost and aborted the assault. The elements of the fleet then rejoined in Hanover Sound, about six nautical miles east of Nassau. There Hopkins held council, and a new plan of attack was developed.[13] According to accounts now discredited, Hopkins' lieutenant, John Paul Jones, suggested a new landing point and then led the action. Jones was unfamiliar with the local waters, unlike many of the captains present in the council.[12] It is more likely that the landing force was led by Cabot's lieutenant, Thomas Weaver, who was also familiar with the area. With the force enlarged by 50 sailors, the three ships, with Wasp offering additional covering support, carried it to a point south and east of Fort Montagu, where they made an unopposed landing between 12:00 and 2:00 pm.[13] This was the first landing of what eventually became the United States Marine Corps.[13] 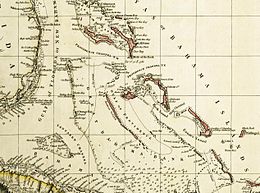 An 1803 depiction of Nassau; the harbor entrances are on either side of Hog Island, just north of Nassau

A lieutenant named Burke led a detachment out from Fort Montagu to investigate the rebel activity. Given that he was severely outnumbered, he opted to send a truce flag to determine their intentions. From this he learned that their objective was the seizure of powder and military stores.[14] In the meantime, Browne arrived at Fort Montagu with another eighty militiamen. Upon learning the size of the advancing force, he ordered three of the fort's guns fired, and withdrew all but a few men back to Nassau. He himself retired to the governor's house, and most of the militiamen also returned to their homes rather than attempting to make a stand.[14] Browne sent Burke out to parley with the rebels a second time, in order to "wait on the command officer of the enemy to know his errand and on what account he had landed his troops."[14]

The firing of Montagu's guns had given Nicholas pause for concern, but his men had occupied the fort, and he was consulting with his officers on their next move when Burke arrived. They obligingly repeated to Burke that they had arrived to take the powder and weapons, and were prepared to assault the town. Burke brought this news back to Browne around 4:00 pm.[14] Rather than advance further on Nassau, Nicholas and his force (200 marines and 50 sailors) remained at Fort Montagu that night.[15] Browne held a war council that evening, in which the decision was made to attempt the removal of the gunpowder. At midnight, 162 of 200 barrels of gunpowder were loaded onto Mississippi Packet and HMS St John, and at 2:00 am they sailed out of Nassau harbor, bound for Saint Augustine.[8] This feat was made possible because Hopkins had neglected to post even a single ship to guard the harbor's entrance channels, leaving the fleet safely anchored in Hanover Sound.[16] 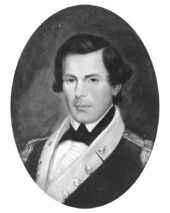 Nicholas' marines occupied Nassau without resistance the next morning after a leaflet written by Hopkins was distributed throughout the town. They were met en route by a committee of the town's leaders, who offered up the town's keys.[15][16]

Hopkins and his fleet remained at Nassau for two weeks, loading as much weaponry as would fit onto the ships, including the remaining 38 casks of gunpowder.[17] He pressed into service a local sloop, Endeavour, to carry some of the material.[18] Browne complained that the rebel officers consumed most of his liquor stores during the occupation, and also wrote that he was taken in chains like a "felon to the gallows" when he was arrested and taken to Alfred.[15]

During their sojourn at Nassau, Fly arrived. Her captain reported that she and Hornet had fouled their rigging together and that Hornet suffered significant damage as a consequence.[18] On March 17, the fleet sailed for Block Island Channel off Newport, Rhode Island, with Browne and other officials as prisoners.[19] The return voyage was uneventful until the fleet reached the waters of Long Island. On April 4, they encountered and captured HMS Hawk, and the next day captured Bolton, which was laden with stores that included more armaments and powder. The fleet finally met resistance on April 6, when it encountered HMS Glasgow, a sixth-rate ship. In the ensuing action, the outnumbered Glasgow managed to escape capture, severely damaging Cabot in the process, wounding her captain, Hopkins' son John Burroughs Hopkins, and killing or wounding eleven others.[20]

The fleet sailed into the harbor at New London, Connecticut on April 8.[21]

Browne was eventually exchanged for American general William Alexander (Lord Stirling), and was roundly criticized for his handling of the whole affair.[22] Nassau remained relatively poorly defended and was again subjected to American rebel threat in January 1778.[22] It was then seized by Spanish forces under Bernardo de Gálvez in 1782, and returned to British control after the war.[23]

While Hopkins was initially lauded for the success at Nassau, the failure to capture Glasgow and crew complaints about some of the captains led to a variety of investigations and courts martial. As a result of these, Providence's captain was relieved of his command, which was given to Jones.[24] Jones, who had performed well in the Glasgow encounter in spite of a crew reduced by disease, thereafter received a captain's commission in the Continental Navy.[25]

The manner by which Hopkins distributed the spoils was criticized,[26] and his failure to follow his orders to patrol the Virginia shore resulted in censure by the Continental Congress.[27] After a series of further missteps and accusations, Hopkins was forced out of the navy in 1778.[28]

Two ships of the United States Navy have been christened USS Nassau; USS Nassau (LHA-4), an amphibious assault ship, is named specifically in recognition of this battle,[29] while USS Nassau (CVE-16) was named for Nassau Sound, the body of water off the coast of Florida near Jacksonville.[30]

Retrieved from "https://en.wikipedia.org/w/index.php?title=Raid_of_Nassau&oldid=947129193"
Categories:
Hidden categories:
The article is a derivative under the Creative Commons Attribution-ShareAlike License. A link to the original article can be found here and attribution parties here. By using this site, you agree to the Terms of Use. Gpedia Ⓡ is a registered trademark of the Cyberajah Pty Ltd.