The highland province is known as the Salad Bowl of the Philippines due to its huge production of upland vegetables.[1][2][5]

Situated within the interior of Benguet is the highly urbanized city of Baguio, which is administered independent from the province.

The mountainous area now covered by Benguet is generally presumed to have been settled from at least the 14th century by tribes coming from the surrounding lowlands, lured by the abundance of natural resources such as gold, hides, and wax. Two of these groups, the Ibaloi and the Kankanaey, are dominant ethnolinguistic groups of the area. In the pre-conquest period, these tribes enjoyed flourishing trade with lowland groups immediately to their west and south, such as the Pangasinans. Governor Juan "Oraa" Cariño (1913-1918) one of the governors of Benguet, was the first Filipino to be a governor.

The Kankanay occupied the northern highlands of the province, while the Ibaloy occupied the southern portion, while all Igorots practiced animism and ancestor worship. Rituals were proscribed by the priests, mambunong. The economy of the region was based on rice terraces, root crop swidden farming, livestock raising, hunting, foraging, plus the mining and trading of gold. These Igorot gold mines were located in Suyoc, Tabio, Acupan, and Antamok. Gold panning took place in placer deposits along the Agno River, the Bued River, the Suyoc River, and the Amburayan River. Gold was also mined from lode veins within andesite and diorite. Gold in Mankayan was associated with copper. Gold mining resulted in social stratification, with the upper class consisting of the mine owners, the baknang, followed by the gold workers, or abiteg, and then the bagaen, or slave class. These slaves were made up of war captives, and their children. Gold mines were inheritable kinship property, while original ownership was bestowed on those individuals discovering the gold location, and then developing the property.[6][7]:183

At the beginning of the Spanish Era, colonisers heard of the rich gold mines in the mountains and attempted to colonize the highlands, but failed. In 1572, Spanish conquistador Juan de Salcedo led a small expedition into the southern part of Benguet, but the natives forced it to retreat.[5] The first major expedition into the mountains occurred in 1620, when Spanish explorers went into the La Trinidad Valley, followed by a second expedition in 1623, and a third in 1624. This was the last attempt to occupy the Baguio gold mines by the Spanish until the Galvey expeditions (1829-1839).[6]:473–475

In the 1800s, Spanish colonizers made more serious attempts such as expeditions under Col. Guillermo Galvey[8]:280 and succeeded in establishing a presence in the La Trinidad Valley, named after Galvey's wife.[5]

This area later became a district of the new province of La Montañosa (or La Montaña)[9][10] in 1846. Eight years later, in 1854, Benguet became a separate comandancia politico-militar. Parts of the present province were established as component territories of other comandancias such as Lepanto and Amburayan.[5]

When the Americans took control of the Philippines, they established local civil governments in many parts of the country. American civilian government was established in Benguet on November 23, 1900 through Act No. 48, with Canadian journalist H.P. Whitmarsh appointed as the province's first governor.[11]

Upon the American colonial government enacting Act No. 1876 on August 18, 1908 which created Mountain Province from areas of the old La Montañosa, Benguet (along with Amburayan, Apayao, Bontoc, Ifugao, Kalinga, and Lepanto) became sub-provinces of this new province.[5][14] A year later in 1909, the township of Baguio was abolished upon its conversion into a chartered city. In 1920, portions of the sub-provinces of Amburayan and Lepanto were incorporated into Benguet.[5]

Mining companies started operating in the province in the 1930s. This brought jobs, and many lowlanders migrated to Benguet, especially in towns surrounding the gold mines, such as Itogon, Mankayan and Tuba.[15]

During World War II, Igorot guerrillas and the combined Filipino and American forces fought Japanese soldiers during the final days of the war in 1945.[further explanation needed]

On June 22, 1973, as part of the Integrated Organization Plan of Marcos, Benguet was placed under the jurisdiction of the Ilocos Region as a form of gerrymandering.[18] During the Marcos dictatorship, thousands of Benguet natives were tortured and murdered through various means such as rape, forced stripping, electric shocks, beatings, and genital mutilations, among many others. Benguet religious leaders rose up against Marcos until the People Power Revolution of 1986 occurred, where Corazon Aquino became president and democracy was restored.[19][20][21] When the Cordillera Administrative Region was established by President Corazon Aquino thru Executive Order 220 on July 15, 1987, Benguet was made one of its provinces.[5][22][23]

The main gold base metal mineralization zone is approximately 8 km wide, trends north south for tens of kilometers, and is centrally located at 16° 20' to 16° 26' N latitude and 120° 37' 30" to 120° 43' 30" E longitude. The western boundary of this zone is defined by a volcanic belt, just west of Baguio City, while the eastern boundary is defined by an intrusive belt, just east of the Itogon and Antamok mines. The Agno quartz diorite batholith is further east near Binga Dam. Key mines, starting from the south, include the Philex (Cu), Acupan (Au), Itogon (Au), Black Mt. (Cu), Benguet Exploration (Cu), Atok (Au), Antamok (Cu and Au), and Baguio Gold (Au), where Baguio Gold and Antamok are east of Baguio City. Continuing northwards, key mines include the King Solomon (Cu), St. Nino (Cu), Boneng (Cu), Lobo (Cu), Gambang (Cu and Au), and Lepanto (Cu and Au). By 1979, underground mining had reached Level 1850 in the Antamok Mine.[25][26][7] 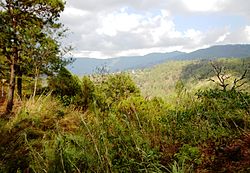 Situated within the Cordillera mountains, Benguet is dominantly mountainous. Mount Pulag, the highest in Luzon is located within Kabayan. The mountains form the headwaters of several rivers, the major ones which include the Agno, Amburayan, Bued, Bakun, Balili and the Asin. Some of these run through river valleys or gorges.

Several natural lakes, small in size, are found within the hinterlands. The largest are the "Four Lakes" in Kabayan; Lake Bulalacao, Lake Detepngepos, Lake Incolos and Lake Tabeyo.[28] 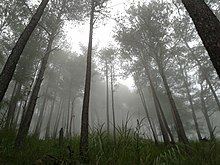 The province suffers from crop damage resulting from seasonal frost during the cold months of December to March, especially in high-altitude towns such as Atok, Buguias, Mankayan and Kibungan.[30][31] In February 2007, Benguet suffered crop damage due to temperatures reaching as low as 7 °C (45 °F).[32]

The highly urbanized city of Baguio, although administratively independent from Benguet, is situated in the interior of the province, surrounded by the municipalities of La Trinidad, Itogon, Sablan and Tuba. The city used to be part of the province but became independent when the city's charter was enacted in 1909.

The 13 municipalities of the province comprise a total of 140 barangays, with Pico in La Trinidad as the most populous in 2010, and Anchokey in Kabayan as the least.[34]

The population of Benguet in the 2015 census was 446,224 people,[4] making it the most populous province in the region. It had a density of 160 inhabitants per square kilometre or 410 inhabitants per square mile. If the highly urbanized city of Baguio is included for geographical purposes, the population is 791,590, with a density of 280/km2 (725/sq mi).

The native inhabitants of Benguet comprise three ethnolinguistic groups. Kankanaeys dominate the northwestern municipalities, Ibalois are concentrated on the southeast, and Kalanguyas are mostly found in the east.[5][37][38] Migrants from lowland provinces have fused with the local populace to form a melting pot in some[vague] areas.[17][38][39]

According to the 2000 Philippine census, Kankanaeys comprised 42.96% (141,434) of the entire provincial household population of 329,216 at the time, while 29.15% (95,968) were identified as Ibalois, and 3.69% (12,147) were Ikalahan/Kalanguya. Major resident lowland ethnic groups included Ilocanos at 13.36% (43,984) and Tagalogs at 2.36% (7,773). Ilokano population arrived in the province after then president Marcos ordered an Ilokona migration towards the province in an attempt to solidify his administration's rule in northern Luzon. This resulted in ethnic land-grabbing of Ilokanos from indigenous Ibaloi, Kankanaey, and Kalanguya peoples. In 2002, the Ibaloi people formally retaliated against the Marcos-initiated exploitation of their lands by 'exorcising' the now-destroyed Bust of Ferdinand Marcos in La Union.[36]

Benguet residents generally speak their own languages in addition to Ilocano, Tagalog, and English, which are used for trade and commerce. The Ibaloi tribe speak Ibaloi, which is similar to Pangasinan, while the Kankanaey have their own eponymous language, which is related to the Bontoc language. 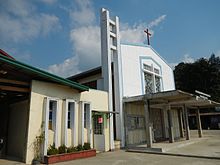 Roman Catholicism is the predominant religion with 59% adherence.,[41] Protestants, especially Anglicans, Methodists, Baptists, and Evangelicals, form about 33% of the population,[42][43] while the Iglesia ni Cristo forms about 3%.[44] There is also small community of Muslims (0.472% of the province population). 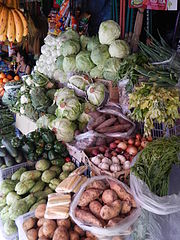 Benguet is a major producer of highland vegetables in the country.

Agriculture, mining, and tourism are the major industries in Benguet. Its cool climate and high altitude has made it an ideal place for producing highland vegetables. Benguet is often called the Salad Bowl of the Philippines.[2][5][38] The La Trinidad Vegetable Trading Post in the capital town of La Trinidad serves as the hub of vegetable trading in the province, attracting farmers, merchants and traders from the local community and the Philippines' different provinces.[45] Major crops produced which include potatoes, Baguio beans, peas, strawberries, cabbage, broccoli, cauliflower, lettuce, sayote and carrots are shipped throughout the country.[5][46][47][48]

Horticulture and floriculture are practiced in the province.[49] The province supplies flowers to the different municipalities, including Baguio City, as well as to Metro Manila, including other parts of Luzon, Visayas and Mindanao.[50][51][52] Roses are produced, particularly in Barangay Bahong in La Trinidad, earning the barangay the title Rose Capital of the Philippines.[53] Apisang (scientific name: Pittosporum resiniferum), a plant endemic to the Philippines, is grown in the municipalities of Kapangan and Kibungan as a potential alternative source of fuel and energy, rivaling the jatropha biofuel plant.[54][55]

Mining is a major industry in Benguet, which is one of the country's leading gold producers.[5] The Benguet Corporation, the first and oldest mining company in the Philippines, has extracted gold, copper and chromite in Itogon since 1903.[57][58]

Other mineral deposits are silver, copper, pyrite, and limestone. Silver smithing is a large industry in Benguet, and many entrepreneurs sell silver works at lower prices in Baguio City compared to Manila. In 2006, revenues from mining reached 4 billion pesos from just two (Lepanto Consolidated Mining Corporation and Philex Mines) of many mining firms operating in the province. The province's mining vigor has never translated into better quality of life of the Benguet people, simply because a bulk of the mining firm's taxes are not paid directly to the province.[59] The two mining corporations, like many others around the country, have principal offices in the City of Makati, a set-up that makes Makati the prime mining tax beneficiary.

The location of Baguio City within Benguet draws many tourists from the lowlands. Often, people who go to Baguio also explore the province, especially the strawberry fields in La Trinidad.

Higher education in the province is centered in the capital town of La Trinidad,[60] which houses the Main Campus of the only university in Benguet, the Benguet State University (BSU). The university has two satellite campuses in two municipalities; the Buguias Campus at Loo, Buguias, and the Bokod Campus at Ambangeg, Bokod.[61]

Strawberries from La Trinidad, recognized as the "Strawberry Fields of the Philippines"

The province is a major tourist destination in the country,[1] with most of its tourist spots centered on culture and nature.[62] Baguio City's location within the province provides a boost to the tourism industry of the province.[63] Notable interesting places in the province include Mount Pulag along Kabayan, Kennon Road in Tuba, Ambuklao Dam in Bokod, Binga Dam in Itogon, strawberry and flower farms in La Trinidad, and the Palina and Naguey rice terraces in Atok.

Tuba and Tublay hot springs are usually flocked by local tourists from the neighboring provinces. Vegetable terraces can be seen along the Halsema Highway, especially during the growing season. Kabayan is known for its centuries-old mummies, while Buguias is visited for its hot springs and the Apo Anno.

Retrieved from "https://en.wikipedia.org/w/index.php?title=Benguet&oldid=965196753"
Categories:
Hidden categories:
The article is a derivative under the Creative Commons Attribution-ShareAlike License. A link to the original article can be found here and attribution parties here. By using this site, you agree to the Terms of Use. Gpedia Ⓡ is a registered trademark of the Cyberajah Pty Ltd.