The Blood Run Site is an archaeological site on the border of the US states of Iowa and South Dakota. The site was essentially populated for 8,500 years, within which earthworks structures were built by the Oneota Culture and occupied descendant tribes such as the Ioway, Otoe, Missouri, and shared with Quapaw and later Kansa, Osage, and Omaha (who were both Omaha and Ponca at the time) people. The site was so named on account of the iron-stained soil.[3] 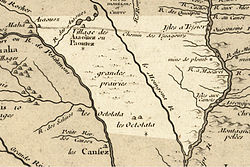 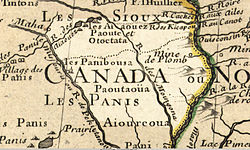 Arikara, Dakota, and Cheyenne were regular traders with the village and Nakota/Dakota and Arikara people also regularly resided there in later years. The site overlaps the Iowa and South Dakota border, near Sioux Falls, South Dakota, between Granite, Iowa, and Harrisburg, South Dakota.[2]

Although declared a National Historic Landmark in 1970, its integrity is endangered by gravel quarrying and looting.[2] The site was substantially looted and areas wholly destroyed by settlers and looters through the late 1930s and by subsequent generations of collectors. A possible snake mound rivaling the Serpent Mound in Ohio was used for railroad fill.[citation needed]

Blood Run was mapped in the early 18th century by French voyageurs trading with the village, which was then populated largely by Omaha people, but other cultures shared the area, about 480 mounds existed and a population of 10,000 Native people was documented in the corresponding census.[citation needed] In the late 19th century, 176 mounds were still visible. Today 78 mounds still exist, mostly burial. In 1987 the State of Iowa acquired a prominent portion of the site for a state park. The State of South Dakota Game, Fish, and Parks Commission, upon offer of land sale by owners Buzz and Lois Nelson and the sole civilian testimony by SD author of Blood Run (book) (a volume supported by a SD Arts Council Grant) and Sioux Falls Public Schools and Office of Indian Education teacher, Allison Hedge Coke, the Commission voted to acquire the area as state park land in January 2003. Doug Hofer was a supportive presence at the hearing.[4]

December 2011 SD Governor Dennis Daugaard announced that an agreement was reached on the purchase option for 324 acres in the Blood Run Historical Landmark area on the Lincoln County, S.D., side of the Big Sioux River. "South Dakota Department of Game, Fish and Parks, the Parks and Wildlife Foundation and The Conservation Fund to acquire the property for $3.5 million before the end of the year, according to the governor’s office." "The Conservation Fund will purchase and hold the majority of the Nelson property until funds are available and then transfer it to the state of South Dakota."[5]

Retrieved from "https://en.wikipedia.org/w/index.php?title=Blood_Run_Site&oldid=958496636"
Categories:
Hidden categories:
The article is a derivative under the Creative Commons Attribution-ShareAlike License. A link to the original article can be found here and attribution parties here. By using this site, you agree to the Terms of Use. Gpedia Ⓡ is a registered trademark of the Cyberajah Pty Ltd.