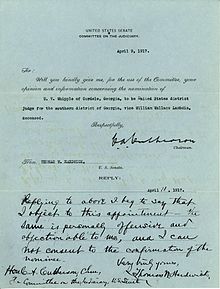 A Senate blue slip from 1917 for U.V. Whipple, a candidate for district judge for the southern district of Georgia, signed by Georgia Senator Thomas Hardwick, who wrote that "I object to this appointment—[Whipple] is personally offensive and objectionable to me, and I can not consent to the confirmation of the nominee."[1]

A blue slip or blue-slipping refers to two distinct legislative procedures in the United States Congress.

In the House, it is the rejection slip given to tax and spending bills sent to it by the Senate that did not originate in the House in the first place, per the House's interpretation of the Origination Clause.

In the Senate, it is the slip on which the Senators from the state of residence of a federal judicial nominee gives an opinion on the nominee.

When, in the opinion of the House of Representatives, a Senate-introduced bill that raises revenue or appropriates money is passed by the Senate and sent to the House for its consideration, the House places a blue slip on the legislation that notes the House's constitutional prerogative and immediately returns it to the Senate without taking further action. This blue-slipping procedure, done by an order of the House, is routinely completed to enforce its interpretation that the House is the sole body to introduce revenue or appropriations legislation. The failure of the House to consider the legislation means it cannot become a law. This tactic is historically of great use to the House and, as a practical matter, the Senate does not introduce tax or revenue measures to avoid a blue slip.[2][3]

The Senate can circumvent this requirement by substituting the text of any bill previously passed by the House with the text of a revenue bill.

In the Senate, a blue slip is an opinion written by a Senator from the state where a federal judicial nominee resides. Both senators from a nominee's state are sent a blue slip in which they may submit a favorable or unfavorable opinion of a nominee. They may also choose not to return a blue slip. The Senate Judiciary Committee takes blue slips into consideration when deciding whether or not to recommend that the Senate confirm a nominee.

A report issued by the Congressional Research Service in 2003 defines six periods in the use of the blue slip by the Senate:

In October 2017, Senate Majority Leader Mitch McConnell announced that he believed blue slips should not prevent committee action on a nominee.[7] In November 2017, the Chairman of the Senate Judiciary Committee, Chuck Grassley, announced that the committee would hold hearings for David Stras and Kyle Duncan. Stras' hearing was held up by Senator Al Franken's refusal to return the blue slip, while Duncan's hearing was held up by Senator John Neely Kennedy's indecision on his blue slip. Kennedy, however, consented to Duncan receiving a hearing.[8][9]

In February 2019, attorney Eric Miller was confirmed to serve on the Ninth Circuit Court of Appeals, despite the fact that neither of his two home-state senators (Patty Murray and Maria Cantwell, both of Washington) had returned blue slips for him.[10] He was the first federal judicial nominee to be so confirmed without support from either of his home-state senators, although other nominees were similarly confirmed to the Courts of Appeals without blue slips later in 2019, including Paul Matey (Third Circuit, New Jersey), Joseph F. Bianco and Michael H. Park (both Second Circuit, New York), and Kenneth K. Lee, Daniel P. Collins, and Daniel Aaron Bress (all Ninth Circuit, California).

Retrieved from "https://en.wikipedia.org/w/index.php?title=Blue_slip&oldid=979177775"
Categories:
Hidden categories:
The article is a derivative under the Creative Commons Attribution-ShareAlike License. A link to the original article can be found here and attribution parties here. By using this site, you agree to the Terms of Use. Gpedia Ⓡ is a registered trademark of the Cyberajah Pty Ltd.