Book of the Dean of Lismore 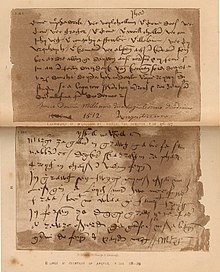 Two facsimiles, printed by William Forbes Skene in 1862; below are lines from the Countess of Argyll; above is a genealogy of the MacGregors.

The Book of the Dean of Lismore (Scottish Gaelic: Leabhar Deathan Lios Mòir) is a famous Scottish manuscript, compiled in eastern Perthshire in the first half of the 16th century. The chief compiler, after whom it is named, was James MacGregor (Seumas MacGriogair), vicar of Fortingall and titular Dean of Lismore Cathedral, although there are other probable scribes, including his brother Donnchadh[1] and William Drummond (Uileam Druimeanach), curate of Fortingall. It should not be confused with the similarly named Book of Lismore, an Irish manuscript from the early 15th century.

It is primarily written in the "secretary hand" of Scotland,[1] rather than the corr-litir style of hand-writing employed by Gaelic speakers in Ireland. The orthography is the same kind used to write the Lowland Scots variety of the Anglic languages, and was a common way of writing Scottish Gaelic in the Late Middle Ages.

Although the principal part of the manuscript's contents are in Gaelic, the manuscript as a whole is multilingual, and there are a significant number of texts written in Scots and Latin, including extracts from the Scots poets William Dunbar and Robert Henryson, and there is a great deal of Gaelic-English diglossia throughout the manuscript. Many of the Gaelic texts are of Irish provenance, and in the case of bardic poetry, Irish poems outnumber Scottish poems 44 to 21.

Retrieved from "https://en.wikipedia.org/w/index.php?title=Book_of_the_Dean_of_Lismore&oldid=933028917"
Categories:
Hidden categories:
The article is a derivative under the Creative Commons Attribution-ShareAlike License. A link to the original article can be found here and attribution parties here. By using this site, you agree to the Terms of Use. Gpedia Ⓡ is a registered trademark of the Cyberajah Pty Ltd.