Brooks County is a county located in the U.S. state of Georgia, on its southern border with Florida. As of the 2010 census, the population was 16,243.[1] The county seat is Quitman.[2] The county was created in 1858 from portions of Lowndes and Thomas counties by an act of the Georgia General Assembly and was named for pro-slavery U.S. Representative Preston Brooks after he severely beat abolitionist Senator Charles Sumner with a cane for delivering a speech that upset him.

Native Americans and the Spanish

Historic Native peoples occupying the area at the time of European encounter were the Apalachee and the Lower Creek.[3] The first Europeans in what is now Brooks County were Spanish missionaries from their colony in Florida, who arrived around 1570.

The area that was to become Brooks County was first opened up to European-American settlement in 1818 when Irwin County was established. Coffee Road was built through the region in the 1820s. Lowndes County's first court session was held at the tavern owned ran by Sion Hall on the Coffee Road, near what is now Morven, Georgia in Brooks County.

Many residents of Lowndes County were unhappy when the Atlantic and Gulf Railroad announced June 17, 1858 that they had selected a planned route that would bypass Troupville, the county seat. On June 22 at 3:00 am, the Lowndes County courthouse at Troupville was set aflame by William B. Crawford, who fled to South Carolina after being released on bond.

On August 9, a meeting convened in the academy building in Troupville, at which residents decided to divide Lowndes and create a new county to the west of the Withlacoochee River, to be called Brooks County.

On December 11, 1858, Brooks County was officially organized by the state legislature from parts of Lowndes and Thomas counties. It was named for Preston Brooks, a member of Congress prior to the Civil War. He was best known for his vicious physical assault in Congress of the older Senator Charles Sumner, an anti-slavery advocate from Massachusetts.

The county had been developed along the waterways for cotton plantations, dependent on enslaved laborers, many of whom were transported to the South in the domestic slave trade during the antebellum years. Cotton brought a high return from local and international markets, making large planters wealthy. At the time of the 1860 federal census, Brooks County had a white population of 3,067, a Free people of color population of 2, and a slave population of 3,282. The Atlantic and Gulf Railroad reached Quitman, the county seat, on October 23, 1860.

Some Confederate Army regiments were raised from the men of Brooks County. Plantation owners, county officials, and slave patrol members were exempt from military conscription, which caused some contention between the different economic classes in Brooks County. 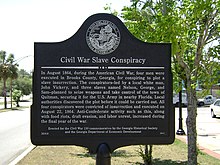 In August 1864, a local white man named John Vickery began plotting a slave rebellion. His plan called for killing the slave owners, stealing what weapons they could find, setting fire to Quitman, going to Madison, Florida, burning the town, getting help from Union troops from the Gulf Coast, and then returning to Quitman. On the evening before the rebellion, a slave was arrested for theft and interrogated. Vickery was soon arrested as well. Vickery and four slave suspects were given a military trial by the local militia. Two Confederate deserters from Florida were also believed to have been involved, but were not caught by the time of the trial.[5]

On August 23, 1864 at 6:00 p.m., Vickery, and slaves Sam, Nelson, and George were publicly hanged in Quitman. The court could not reach a decision on the guilt of Warren, a slave held by Buford Elliot.[5]

Post-Reconstruction and imposition of Jim Crow

After the war, many freedmen worked as sharecroppers or tenant farmers, in an effort to preserve some independence from planters. Following the war and the Reconstruction era, Brooks County was one of the areas with a high rate of racial violence by whites against blacks. Its 20 deaths make it the county in Georgia that had the third-highest number of lynchings from 1870 to 1950.[6] (From 1880 to 1930, Georgia had the highest number of such extrajudicial murders in the country).[7] See, for example, the Brooks County race war of 1894.

In May 1918, at least 13 African Americans were killed during a white manhunt and rampage after Sidney Johnson killed an abusive white planter.[8] Johnson had been forced to work for the man under the state's abusive convict lease system. Among those killed were Hayes Turner, and the next day his wife Mary Turner, who was eight months pregnant. They were the parents of two children. Mary Turner had condemned the mob's killing of her husband. She was abducted by the mob in Brooks County and brutally murdered at Folsom's Bridge on the Little River on the Lowndes County side; her unborn child was cut from her body and killed separately. During the next two weeks, at least another eleven blacks were killed by the mob. Johnson was killed in a shootout with police. As many as 500 African Americans fled Lowndes and Brooks counties to escape future violence.[9]

Mary Turner's lynching drew widespread condemnation nationally. It was a catalyst for the Anti-Lynching Crusaders campaign for the 1922 Dyer Bill, sponsored by Leonidas Dyer of St. Louis. It proposed to make lynching a federal crime, as southern states essentially never prosecuted the crimes.[10] The Solid South Democratic block of white senators consistently defeated such legislation, aided by having disenfranchised most black voters in the South. In 2010, a state historical marker, encaptioned "Mary Turner and the Lynching Rampage," was installed at Folsom's Bridge in Lowndes County to commemorate these atrocities.

In the 21st century, Brooks County is classified as being in the Plantation Trace tourist region.

The eastern boundary of the county is made up of the Little River (Withlacoochee River) and the Withlacoochee River, which together meander along a distance of over 100 miles (160 km) to form that boundary. These river boundaries are shared with Cook and Lowndes counties. The southern boundary of the county has a mutual east–west interface of about 25 miles (40 km) with Florida, although it is not continuous. The county is discontinuous along the Florida border, with the easternmost section about a mile east of the rest of the county. This section presently consists of one parcel, recorded as 350 acres (1.4 km2), although it has a border with Florida of almost 2 miles (3.2 km). The county shares a north–south boundary about 26 miles (42 km) in length with Thomas County to the west. It also shares an east–west boundary of 10 miles (16 km) and a north–south boundary of 3 miles (4.8 km) with Colquitt County to the northwest. The county has over 10,000 parcels of land, with 19 over 2,000 acres (8.1 km2) and two more than 5,000 acres (20 km2).

The county is home to several endangered plant and animal species, including the Pond Spicebush, the Wood Stork, and the Eastern Indigo snake.

Georgia State Bicycle Route 10 is one of 14 bike routes across Georgia. Route 10 is 246 miles (396 km) long and goes from Lake Seminole in the west to Jekyll Island in the east. It runs a west–east route, of approximately 27.3 miles (43.9 km), through the county and passes through downtown Quitman.

As a result of the demand for slave labor to work the cotton plantations, the county was majority black from before the Civil War well into the 20th century. Starting in the early 1900s, hundreds of blacks left the county in the Great Migration to northern and midwestern industrial cities to gain better opportunities and escape the oppressive Jim Crow conditions, including the highest rate of lynchings of blacks in Georgia from 1880 to 1930.[7]

The Brooks County School District offers pre-school to grade twelve. There are two elementary schools, a middle school and a high school, Brooks County High School.[25] The district has 167 full-time teachers and over 2,563 students.[26]

The county is serviced by the Brooks County Public Library.

The Government consists of a five-member Board of Commissioners. Under the guidelines of the Commissioners is a County Administrator, a Sheriff and Tax Commissioner, the Judicial System and other Boards and Authorities.

Brooks County is well known for its wildlife. Quail, dove, ducks, and deer abound in the fields and forests. Brooks County also offers excellent fishing in its many lakes and streams, which are open to the public.

Brooks County Hospital, a part of Archbold Medical Center, a 25-bed facility[28] was established in 1935 and has 24-hour emergency facilities.

Retrieved from "https://en.wikipedia.org/w/index.php?title=Brooks_County,_Georgia&oldid=1001470829"
Categories:
Hidden categories:
The article is a derivative under the Creative Commons Attribution-ShareAlike License. A link to the original article can be found here and attribution parties here. By using this site, you agree to the Terms of Use. Gpedia Ⓡ is a registered trademark of the Cyberajah Pty Ltd.