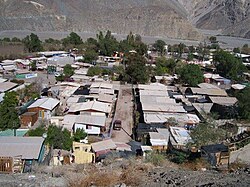 A campamento in Chile

Campamento ("camp", or "tent city") and población callampa ("mushroom town") are terms given in Chile to shanty towns. The term "mushroom town" refers to the speed in which these informal settlements sprung up between the 1960s and the 1980s, literally overnight. Nowadays, the term campamento has replaced "mushroom town". 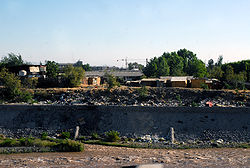 A campamento in the outskirts of Santiago

According to the NGO Un Techo para Chile ("A roof for Chile"), a campamento is defined as a group of crude dwellings of more than eight families, lacking at least one of the following basic services: drinking water, electricity and wastewater treatment, and which are illegally residing on the land.[1]

As of 2004, there were 531 campamentos in Chile. A total of 27,785 houses were home to 32,371 families in these shanty towns. It was estimated that 75% of that population was living below the national poverty line and 41% living under extreme poverty.[1]

Retrieved from "https://en.wikipedia.org/w/index.php?title=Campamento_(Chile)&oldid=907115079"
Categories:
Hidden categories:
The article is a derivative under the Creative Commons Attribution-ShareAlike License. A link to the original article can be found here and attribution parties here. By using this site, you agree to the Terms of Use. Gpedia Ⓡ is a registered trademark of the Cyberajah Pty Ltd.