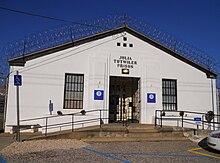 Capital punishment is a legal penalty in the U.S. state of Alabama.

Alabama has the highest per capita capital sentencing rate in the country. In some years, its courts impose more death sentences than Texas, a state that has a population five times as large.[1] However, Texas has a higher rate of executions per capita.[2]

When the prosecution seeks the death penalty, the sentence is decided by the jury and at least 10 jurors must concur.

In case of a hung jury during the penalty phase of the trial, a retrial happens before another jury.[3]

Until 2017, Alabama was the only state which still allowed a judge to impose death against jury verdict in favor of life imprisonment.[4]

The power of clemency belongs to the Governor of Alabama.[5]

The following kinds of murder are punishable by death in Alabama:[7]

Between 1812 and 1965, 708 people were executed in Alabama. Until 1927, hanging was the primary method of execution, although one person was shot.

In addition to murder, capital crimes in Alabama formerly included rape, arson, and robbery.[8] According to the Alabama Department of Corrections, 31 persons were executed by the state for crimes other than murder - including rape, robbery and burglary - between 1927 and 1959.[9] In Kennedy v. Louisiana, 554 U.S. 407 (2008), the U.S. Supreme Court has essentially eliminated the death penalty for any crime at the state level except murder.

The 1972 U.S. Supreme Court case Furman v. Georgia, requiring a degree of consistency in the application of the death penalty, established a de facto moratorium on capital punishment across the United States. That moratorium remained until July 2, 1976, when Gregg v. Georgia decided how states could impose death sentences without violating the Eighth Amendment's ban against cruel and unusual punishment. Alabama passed legislation reinstating use of the death penalty on March 25, 1976, when Alabama's legislature passed, and Governor George Wallace signed, a new death penalty statute. No execution under this law was carried out until 1983.

Holman Correctional Facility has a male death row that originally had a capacity of 20, but was expanded in the summer of 2000 with the addition of 200 single cells in the segregation unit.[10] The William E. Donaldson Correctional Facility has a male death row with a capacity of 24.[11] Donaldson's death row houses prisoners who need to stay in the Birmingham judicial district.[12] Julia Tutwiler Prison for Women houses the female death row.[13] All executions occur at Holman.[10]

In February 2018, Alabama carried out the botched attempted execution of Doyle Hamm.[14][15] During the execution attempt, executioners attempted for nearly three hours to insert an IV that could be used to administer the lethal injection drugs. In the process, the execution team punctured Hamm's bladder and femoral artery, causing significant bleeding.[14][16]

Retrieved from "https://en.wikipedia.org/w/index.php?title=Capital_punishment_in_Alabama&oldid=946674918"
Categories:
Hidden categories:
The article is a derivative under the Creative Commons Attribution-ShareAlike License. A link to the original article can be found here and attribution parties here. By using this site, you agree to the Terms of Use. Gpedia Ⓡ is a registered trademark of the Cyberajah Pty Ltd.