Jump to navigation Jump to search
Subgroup of the Visayan people
This article is about the ethnic group in the Philippines. For their language, see Cebuano language.

Provinces where "Cebuanos" live are highlighted in dark blue. Bisaya, on the other hand, is a combination of Cebuano and other Visayan ethnolinguistic groups, shown in royal blue.

The Cebuano people (Cebuano: Mga Sugbuanon) are the largest subgroup of the larger ethnolingustic group Bisaya, who constitute the largest Filipino ethnolinguistic group in the country. Their primary language is the Cebuano language, an Austronesian language. They originated in the province of Cebu in the region of Central Visayas, but then later spread out to other places in the Philippines, such as Siquijor, Bohol, Negros Oriental, southwestern Leyte, western Samar, Masbate, and large parts of Mindanao. It may also refer to the ethnic group who speak the same language as their native tongue in different parts of the archipelago. 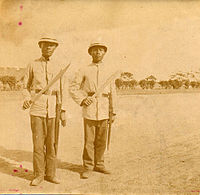 Cebuano men who served as guards in the early 20th century during the American period.
See also: Visayans, Lapu-Lapu, and Rajah Humabon

The earliest European record of Cebuanos was by Antonio Pigafetta of the Magellan expedition. He provided some descriptions of their customs as well as samples of the Cebuano language.[2][3] Ferdinand Magellan was killed in Cebu during the Battle of Mactan against the forces of Lapu-Lapu.[4][5]

Later early Spanish colonists referred to the Cebuanos (and other Visayans) as the pintados ("the painted ones"), due to their widespread practice of tattooing to record battle exploits.[5]

The majority of Cebuanos are Roman Catholic, with many in rural areas synchonizing Catholicism with indigenous Anitism, maintaining beliefs and rituals around saints as avatars for older diwata. A minority of Cebuanos (specifically those in Mindanao) are Muslim, or in mixed Chinese-Cebuano families, incorporate Catholic beliefs with aspects of Buddhism or Taoism.[6]

Among the island's notable festivities are the Sinulog[7] festival, which is a mixture of Christian and native cultural elements, celebrated annually every third week of January.

The Cebuano language is spoken by more than twenty million people in the Philippines and is the most widely spoken of the Visayan languages. Most speakers of Cebuano are found in Cebu, Bohol, Siquijor, Biliran, Western and Southern Leyte, eastern Negros and most of northern, southeastern and western Mindanao. Because of the standardization and adoption of Tagalog as both an official and 'national' language (Pilipino) and the lack of formal teaching of Cebuano in schools and universities, many in "Imperial Manila" remain ignorant of the cultural significance and historic lingua franca of the Central Visayas and most of Mindanao.

The Sinulog Festival, which is held annually on the third Sunday of January in Cebu City.

Retrieved from "https://en.wikipedia.org/w/index.php?title=Cebuano_people&oldid=957902089"
Categories:
Hidden categories:
The article is a derivative under the Creative Commons Attribution-ShareAlike License. A link to the original article can be found here and attribution parties here. By using this site, you agree to the Terms of Use. Gpedia Ⓡ is a registered trademark of the Cyberajah Pty Ltd.