Visitors putting their rafts, canoes and kayaks in the Chattahoochee River

The source of the Chattahoochee River is located in Jacks Gap at the southeastern foot of Jacks Knob, in the very southeastern corner of Union County,[5][6] in the southern Blue Ridge Mountains, a subrange of the Appalachian Mountains. The headwaters of the river flow south from ridges that form the Tennessee Valley Divide. The Appalachian Trail crosses the river's uppermost headwaters. The Chattahoochee's source and upper course lie within Chattahoochee National Forest.

From its source in the Blue Ridge Mountains, the Chattahoochee River flows southwesterly to Atlanta and through its suburbs. It eventually turns due-south to form the southern half of the Georgia/Alabama state line. Flowing through a series of reservoirs and artificial lakes, it flows by Columbus, the third-largest city in Georgia, and the Fort Benning Army base. At Columbus, it crosses the Fall Line of the eastern United States.

From Lake Oliver to Fort Benning, the Chattahoochee Riverwalk provides cycling, rollerblading, and walking along 15 miles (24 km) of the river's banks. Farther south, it merges with the Flint River and other tributaries at Lake Seminole near Bainbridge, to form the Apalachicola River that flows into the Florida Panhandle. Although the same river, this portion was given a different name by separated settlers in different regions during the colonial times.

The name Chattahoochee is thought to come from a Muskogee word meaning "rocks-marked" (or "painted"), from chato ("rock") plus huchi ("marked").[2] This possibly refers to the many colorful granite outcroppings along the northeast-to-southwest segment of the river. Much of that segment of the river runs through the Brevard fault zone.

A local Georgia nickname for the Chattahoochee River is "The Hooch".[7]

The vicinity of the Chattahoochee River was inhabited in prehistoric times by indigenous peoples since at least 1000 BC. The Kolomoki Mounds, now protected in the Kolomoki Mounds Historic Park near present-day Blakely in Early County in southwest Georgia, were built from 350 AD to 650 AD and constitute the largest mound complex in the state.[8][9]

Among the historical Indigenous nations, the Chattahoochee served as a dividing line between the Muscogee (Creek) (to the east) and the Cherokee territories (to the west) in the Southeast. The Chattahoochee River became the dividing point for the Creek Confederacy, which straddled the river and became known as the Upper Creek Red Sticks and the Lower Creek White Sticks.[10]

The United States removed the Native Americans to extinguish their claims and make way for European-American settlement through a series of treaties, land lotteries, and forced removals lasting from 1820 through 1832. The Muscogee were first removed from the southeastern side of the river, and then the Cherokee from the northwest.[11]

The Chattahoochee River was of considerable strategic importance during the Atlanta Campaign by Union General William Tecumseh Sherman of the American Civil War.

Between the tributaries of Proctor Creek and Nickajack Creek on the Cobb and Fulton county lines in metropolitan Atlanta, are nine remaining fortifications nicknamed "Shoupades" that were part of a defensive line occupied by the Confederate Army in early July 1864. Designed by Confederate Brigadier General Francis A. Shoup, the line became known as Johnston's River Line after Confederate General Joseph E. Johnston and is listed on the National Register of Historic Places.

A month prior to the Battle of Atlanta, Shoup talked with Johnston on June 18, 1864 about building fortifications. Johnston agreed, and Shoup supervised the building of 36 small elevated earth and wooden triangular fortifications, arranged in a sawtooth pattern to maximize the crossfire of defenders. Sherman tried to avoid the Shoupade defenses by crossing the river to the northeast. The nine remaining Shoupades consist of the earthworks portion of the original earth and wooden structures; they are endangered by land development in the area.[12]

Two of the last battles of the war, West Point and Columbus took place at strategically important crossings of the Chattahoochee.

Since the nineteenth century, early improvements and alterations to the river were for the purposes of navigation. The river was important for carrying trade and passengers and was a major transportation route.

In the twentieth century, the United States Congress passed legislation in 1944 and 1945 to improve navigation for commercial traffic on the river, as well as to establish hydroelectric power and recreational facilities on a series of lakes to be created by building dams and establishing reservoirs. Creating the manmade, 46,000-acre Walter F. George Lake required evacuating numerous communities, including the historically majority-Native American settlement of Oketeyeconne, Georgia.[13] The lakes were complete in 1963, covering over numerous historic and prehistoric sites of settlement.[14]

Beginning in the late twentieth century, the nonprofit organization called "Upper Chattahoochee Riverkeeper" has advocated for the preservation of the environment and ecology of the northern part of the river, especially the part traversing Metropolitan Atlanta.

In 2010, a campaign to create a whitewater river course was launched in the portion of the Chattahoochee River that runs through Columbus, Georgia. Between 2010 and 2013, construction took place on the river, the Eagle and Phenix and City Mills Dams were breached and a 2.5 mile Whitewater Course was formed in Uptown, Columbus. The project returned the river to its natural path across the Fall Line, as well as creating the longest urban whitewater course in the world.

Several large manmade reservoirs, including Lanier, Walter F. George, West Point, and George W. Andrews, lakes are controlled by the United States Army Corps of Engineers. The dams and reservoirs were developed following legislation by Congress of the mid-1940s for flood control, domestic and industrial water, hydroelectricity, recreation, and improved navigation for river barges. Most of the lakes were completed by 1963.[14] Numerous historic and prehistoric sites were covered over by the lakes during the flooding of the reservoirs, including Oketeyconne, Georgia.[13]

The Georgia Power Company also owns a small series of dams along the middle portion of the river (the Columbus area) between West Point Lake and Lake Walter F. George. Several smaller and older lakes and dams also provide these services on a much smaller and more localized scale, including Bull Sluice Lake, which is held by the Morgan Falls Dam. This dam was built by the Georgia Railway and Power Company in 1902 to provide electric power for the Atlanta trolley system, which has long since been replaced by other forms of transportation.

The Chattahoochee River in Autumn

Within Georgia, it divides: 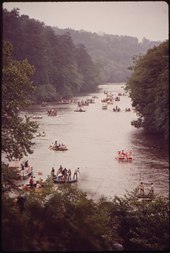 The Ramblin' Raft Race, an annual event in Atlanta, was cancelled in 1980 due to environmental concerns.

Atlanta is built upon the crest of a large ridge, rather than in the floodplain of the river. This has contributed the preservation of much of the natural scenic beauty of the section that runs through metropolitan Atlanta. North of the metropolis, the Chattahoochee River National Recreation Area protects other portions of the riverbanks in a region that is spread across several disconnected areas.[15]

Since three states have needs related to the river, there has been increasing controversy since the late twentieth century related to competing development among the regions and the implications for the river. The enormous growth of metropolitan Atlanta has increased its water withdrawals from the river. This has effects downstream. For example, the oysters in the Apalachicola Bay of Florida depend on the brackish water mixture of river and ocean water, and the alternating freshwater and saltwater flows that the river and the tides provide. The amount of flow in the Chattahoochee has also been decreased by interbasin water transfers, where water is withdrawn from the Chattahoochee, but discharged as treated sewage water into another river, such as the Oconee River, which flow to the Atlantic Seaboard via the Altamaha River.

Interest groups and the state of Florida have asked the U.S. Congress to intervene to reduce the priority given to put navigation of the lower Chattahoochee, south of Columbus, by river barge. This requirement causes large water withdrawals, which environmental supporters consider a waste of water needed to support habitats, especially during droughts. The navigation issue has aggravated the fight between Georgia, Florida, and Alabama over rights to the river water. A lawsuit has been filed in the case to reduce priorities given to navigation. The lawsuit is now in court, and may take years to resolve.[when?]

The second most recent major flood along the river occurred during the 2009 Georgia floods, with 28.10 feet (8.56 m) of water recorded at Vinings at the northwestern Atlanta city limit. The flood was over 5 feet (1.5 m) higher than the previous flood recorded in September 2004, as a result of Hurricane Fred. Numerous tributaries also swelled far over and beyond their banks. These were the highest water levels seen since 1990, and the second-highest ever since the large Buford Dam was built upstream. The National Weather Service in Peachtree City estimated that this was a 500-year flood event.

The main stream gauges are located:

Water-level forecasts are regularly issued only at Vinings and Atlanta. Forecasts are issued only during high water at Norcross, Whitesburg, West Point, and the Lake Walter F. George and Andrews Dams. All other locations have observations only. 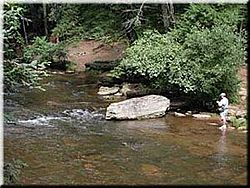 Tributary creeks, streams, and rivers, as well as lakes, along with the county they are in:

Note that the above list is incomplete, and that each item is not in the exact order in which it joins the Chattahoochee. (For confluences now inundated by lakes, it may be impossible to determine from current maps exactly where they were.)

Country music artist Alan Jackson released his song "Chattahoochee" in 1993 as a single off his album A Lot About Livin' (And a Little 'bout Love) (the name of the album being the last line of the aforementioned song's chorus). "Chattahoochee" received Country Music Association awards for Single of the Year and Song of the Year.[31]

Retrieved from "https://en.wikipedia.org/w/index.php?title=Chattahoochee_River&oldid=955841208"
Categories:
Hidden categories:
The article is a derivative under the Creative Commons Attribution-ShareAlike License. A link to the original article can be found here and attribution parties here. By using this site, you agree to the Terms of Use. Gpedia Ⓡ is a registered trademark of the Cyberajah Pty Ltd.