Cherokee in the American Civil War 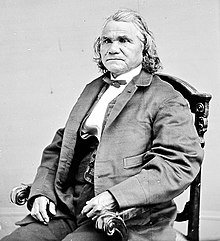 Confederate Brigadier General Stand Watie, the only American Indian to reach the rank of general in the Civil War on either side.

The Cherokee in the American Civil War were active in the Trans-Mississippi and Western Theaters. In the east, Confederate Cherokees led by William Holland Thomas hindered Union forces trying to use the Appalachian mountain passes of western North Carolina and eastern Tennessee. Out west, Confederate Cherokee Stand Watie led primarily Native Confederate forces in the Indian Territory, in what is now the state of Oklahoma.[1] The Cherokee partnered with the Confederacy in order to get funds, as well as ultimately full recognition as a sovereign, independent state.[2]

The Cherokee blamed the federal government and former United States President Andrew Jackson for the Trail of Tears. They also had adopted "Southern ways" before their removal from their Appalachia home. Cherokee society held slavery as a primary institution throughout the pre-war period, instituting laws that explicitly prohibited primarily "black (or negro) slaves" from obtaining citizenship, and later "persons of color" altogether. Similar laws regarding race and enslaves status propagated themselves through Cherokee judiciary and legislative bodies as Cherokees attempted to legally define themselves as equal to white, at the expense and exclusion of non-white and non-Indian groups, and in particular Blacks.[3] A combination of cultural and legal affinities with states that would secede themselves to the Confederacy, as well as extant western Cherokee distaste for the north when in 1860 William Seward, campaigning on behalf of Abraham Lincoln, said that Lincoln would open the Indian Territory for white settlement, opened a path for a Cherokee alliance with the Confederacy.[4]

Chief of the Cherokee John Ross was adamant that the Union was not dissolved. However, another leader of the Cherokee, Stand Watie, joined the Confederate cause, and on June 1, 1861, began recruiting for all-Indian units that became part of the Confederate army. Full-blooded Cherokee tended to support Ross (who was primarily Scottish) while the mixed-blooded Cherokee supported the 3/4 Cherokee Stand Watie.[5] Stand Watie in 1862 was elected Chief of the newly declared Southern Cherokee Nation.

For the duration of the war, a series of small battles and constant guerrilla warfare were waged by Cherokee in the Indian Territory. Stand Watie officially became the last Confederate general to end fighting on June 25, 1865 at Fort Towson, in the southeast portion of the Indian Territory. The terms of the armistice allowed Watie and his command, the First Indian Brigade of the Army of the Trans-Mississippi, to demobilize rather than surrender and go home with their arms.[6]

During the Civil War, the Cherokee Nation had approximately 21,000 members with 3,000 of them serving in the Confederacy as soldiers.[7] 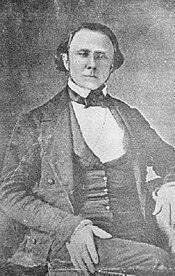 William Holland Thomas was the commander of the well-known legion.

Thomas' Legion, led by William H. Thomas, a European-American who was adopted Cherokee, were originally stationed outside Knoxville, Tennessee at Strawberry Plains, Tennessee. Their primary duty was to protect the Alum Cave, and harass Union troops that invaded Tennessee. While briefly working around Chattanooga, Tennessee in June 1862, Thomas personally captured a Union Soldier, after which each of his men vowed to capture at least one "Yankee" before the war was over.[8]

The Legion would become infamous due to their actions on September 15, 1862.[9] While trying to stop a Union advance through Baptist Gap, a popular leader among the Cherokee, Astoogahtogeh, was killed leading a charge. Enraged, the remaining Cherokee were driven to avenge him. In retaliation for Astoogahtogeh's death, the Cherokee scalped the dead Union soldiers after the battle. After the event was reported in newspapers, Union soldiers would fear the Cherokee, but Thomas feared for the reputation of the Cherokee, as he did not want his people to be seen as barbaric. The scalps were sent to be buried with the soldiers they originally came from.[8]

After a number of Thomas' men were captured in February 1864, some were convinced by the Union that they were fighting for slavery, and thereafter fought for the Union. Others convinced their captors they also would defect to the Union side, but instead went back to Thomas and told him Union officials offered $5,000 for Thomas' scalp. After this, many of his men were sent to fight in Virginia, some of whom were present at Appomattox Court House for General Robert E. Lee's surrender.[10] The rest of the Legion continued to fight until surrendering along with the commanding officer of the District of Western North Carolina to the Union commander they had captured on 10 May 1865.

In May 1861, William H. Thomas began recruiting Cherokees from the Quallatown, North Carolina area.[11] The first two companies were composed mostly of Indian soldiers. They were called the Junaluska Zouaves.[11] Thomas' Confederates were sometimes referred to as Thomas' Legion or Thomas' Legion of Cherokee Indians and Highlanders. They were later designated as the 69th North Carolina Regiment.

In the west, at the end of the war, with the Union victorious, the Union Cherokee established policies that confiscated land from the Confederate Cherokee.[citation needed] The Federal government promised the Confederate Cherokee that the laws promoting the confiscation would be annulled. This was due to Indian Commissioner D.N. Cooley, who saw opportunities in splitting the factions of the Cherokee, as represented by Ross and Watie. Cooley even went as far as to portray Ross as a traitor, when Ross had always been a Union advocate. The Cherokee were forced to adopt their slaves into the tribe, and to allow settlement of their lands by whites. In effect, due to the Cherokee split and the maneuverings of Cooley, the Cherokee suffered the worst of Reconstruction.[6][14]

Monuments were dedicated for the Cherokee's wartime participation in the early 20th century.[15]

Retrieved from "https://en.wikipedia.org/w/index.php?title=Cherokee_in_the_American_Civil_War&oldid=987959807"
Categories:
Hidden categories:
The article is a derivative under the Creative Commons Attribution-ShareAlike License. A link to the original article can be found here and attribution parties here. By using this site, you agree to the Terms of Use. Gpedia Ⓡ is a registered trademark of the Cyberajah Pty Ltd.