The Chickasaw language (Chikashshanompa' , IPA [tʃikaʃːanompaʔ]) is a Native American language of the Muskogean family. It is agglutinative and follows the word order pattern of subject–object–verb (SOV).[3] The language is closely related to, though perhaps not entirely mutually intelligible with, Choctaw. It is spoken by the Chickasaw tribe, now residing in Southeast Oklahoma, centered on Ada.

The language is currently spoken by around 50 people, mostly Chickasaw elders who grew up with the language. Due to boarding schools in the 20th century and Chickasaw removal from their homeland in the 19th century, the widespread knowledge about the language and culture amongst the nation has largely decreased.

Sometime prior to the first European contact, the Chickasaw migrated from western regions and moved east of the Mississippi River, where they settled mostly in present-day northeast Mississippi. Chickasaw towns and villages were structured to be densely populated as a wartime measure but encompassed larger areas when there was no conflict with enemies.[4] A main house and main meeting ground were used to gather groups from the Chickasaw community for ceremonies, celebratory affairs, and to discuss important social, cultural, and political matters.[4] There was a division and specialization in labor done by men who prepared the community for war, hunted for food, and made provisions for the defense of their communities while Chickasaw women tended the home, handled farming and agriculture, and raised the families.[4] They would eventually come into contact with Europeans as time passed on and European exploration of their lands took shape.[4] That is where they encountered European explorers and traders, having relationships with French, English and Spanish during the colonial years. The United States considered the Chickasaw one of the Five Civilized Tribes, as they adopted numerous practices of European Americans. Resisting European-American settlers encroaching on their territory, they were forced by the US to sell their country in 1832 and move to Indian Territory (Oklahoma) during the era of Indian Removal in the 1830s. 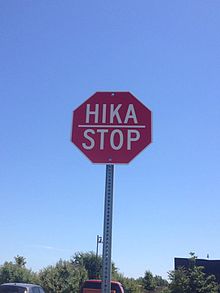 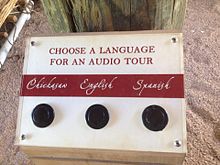 Language offerings for audio tours at the Chickasaw Cultural Center, including Chickasaw, English, and Spanish.

Emily Johnson Dickerson, the last monolingual speaker of Chickasaw, died on December 30, 2013.[6] Ethnologue estimated in its seventeenth edition that Chickasaw retained up to 600 speakers, but noted that this figure was rapidly declining because most speakers are 50 and older.[7] Children are no longer acquiring the language,[7] indicating Chickasaw has a notably low vitality. As of 2014, there were "four to five confident conversational speakers who are under the age of 35."[8] The Chickasaw language is not much used outside of the home. In terms of conservation and language vitality, Ethnologue evaluates the current language situation as moribund,[7] and UNESCO lists Chickasaw as a "severely endangered" language, also noting that most of the ~50 speakers (as of 2019) are over fifty and almost all are bilingual in English.[9]

The Chickasaw Language Revitalization Program, founded in 2007, uses both Munro-Willmond and Humes alphabets. Because Chickasaw is a spoken language, "there is no 'right' or 'wrong' way to spell Chickasaw."[10] Chickasaw is taught through a master-apprentice program, community programs, and self-study programs.

A "Chickasaw Language Basic" app is available for iPhone, iPad, and other iOS devices.[11]

Chickasaw has 16 consonants. In the table below, the consonants are written in the standard Chickasaw orthography. The phonetic symbolization of each consonant is written in the International Phonetic Alphabet (IPA) to the right of each orthographic letter when the orthography differs from the IPA symbol. 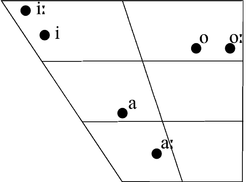 Long and short Vowels of Chickasaw. From Gordon, Munro & Ladefoged (2001:288). Nasal vowels correspond phonetically with the quality of long vowels.

Short vowels are also phonetically lengthened when they occur in the second syllable of a sequence of even-numbered open syllables.[16] For example, the word pisali ('I took him') is phonetically [pɪsəˑlɪ]. The lengthened short vowel is usually intermediate in length between a short vowel and long vowel. However, the phonetic realization varies depending on the individual speaker and also on phonetic environment. The lengthening does not occur at the end of words and is further restricted by certain morphological criteria.[17]

The third person lacks an affix and usually does not distinguish between singular and plural. The first person singular affix is a suffix while the other affixes are prefixes. The first person plural has two forms: il- which is used before vowels and ii- which is used before consonants — thus, il-iyya "we go", ii-malli "we jump". An example inflectional paradigm of the verb malli "to jump" is below (with the pronominal affixes underlined):

The stative series (II) is below. This series is used to indicate stative intransitive subjects and direct objects.

Example with stative intransitive subjects, lhinko "to be fat":

Example with direct objects, pisa "to look at (someone)" (the subject in the paradigm below is unmarked because it is in the third person):

Both active and stative affixes can occur together in which case the active affix indicates the active subject and the stative affix indicates the direct object. Active prefixes occur before stative prefixes. When ish- "active second person singular" occurs before sa- "stative first person singular", it results in issa- (the sh assimilates to s). Likewise, hash- "active second person plural" + sa- is realized as hassa-. The full paradigm of pisa "to look at" is below:

Retrieved from "https://en.wikipedia.org/w/index.php?title=Chickasaw_language&oldid=952585218"
Categories:
Hidden categories:
The article is a derivative under the Creative Commons Attribution-ShareAlike License. A link to the original article can be found here and attribution parties here. By using this site, you agree to the Terms of Use. Gpedia Ⓡ is a registered trademark of the Cyberajah Pty Ltd.