Jump to navigation Jump to search
This article is about the soup or stew. For other uses, see Chowder (disambiguation).

Chowder is a type of soup or stew often prepared with milk or cream and thickened with broken crackers, crushed ship biscuit, or a roux. Variations of chowder can be seafood or vegetable. Crackers such as oyster crackers or saltines may accompany chowders as a side item, and cracker pieces may be dropped atop the dish. New England clam chowder is typically made with chopped clams and diced potatoes, in a mixed cream and milk base, often with a small amount of butter. Other common chowders include seafood chowder, which includes fish, clams, and many other types of shellfish; lamb or veal chowder made with barley; corn chowder, which uses corn instead of clams; a wide variety of fish chowders;[1] and potato chowder, which is often made with cheese. Fish chowder, corn chowder, lamb chowder and especially clam chowder are popular in the North American regions of New England and Atlantic Canada. 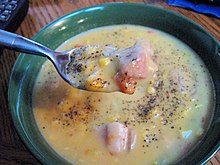 The origin of the term chowder is obscure. One possible source is the French word chaudron,[2][3] the French word for cauldron, the type of cooking or heating stove on which the first chowders were probably cooked.[4][5] Chodier was also a name for a cooking pot in the Creole language of the French Caribbean islands: Crab pas mache, li pas gras; li mache touop, et li tomber nans chodier ("if a crab don't walk, he don't get fat, if he walks too much, he falls into a cooking pot").[6] Note also the Portuguese, Brazilian, Galician and Basque fish and shellfish stew known as caldeirada which would appear to have a similar etymology.[7] Another possible source of the word "chowder" could be the French dish called chaudrée (sometimes spelled chauderée), which is a type of thick fish soup from the coastal regions of Charente-Maritime and Vendée.[8] Yet another etymology could be from Quebecois French, where chaudière means "bucket".[9]

Although in the sixteenth century in Cornwall and Devon a dialect word "jowter" was used to describe hawkers, particularly fish-sellers, with later variants "chowder" and "chowter", this is not cited by the Oxford English Dictionary as a possible source due to controversy regarding the origins of the dish itself. Though the earliest citation the OED gives for the word used in its current sense of a fish-based stew is American,[10] the journal kept by the young botanist Joseph Banks visiting the English and French Newfoundland fisheries in 1766 gives an account of chowder, "which I believe is Peculiar to this Country", and its preparation that shows it was unfamiliar, though "when well made a Luxury that the rich Even in England at Least in my opinion might be fond of It is a Soup made with a small Quantity of salt Pork cut into Small Slices a good deal of fish and Biscuit Boyled for about an hour".[11]

Chowder was not utterly unfamiliar in England at the time, as in Sir Launcelot Greaves (1762) Tobias Smollett has one character state, "My head sings and simmers like a pot of chowder".[5] A Manx sailor in his memoirs recalls a meal made aboard a British ship on a voyage through the Caribbean in 1786: "....we frequently served up a mess called chowder, consisting of a mixture of fresh fish, salt pork, pounded biscuit and onions; and which, when well seasoned and stewed, we found to be an excellent palatable dish." [12] Cookbooks of the period included recipes for "Chowder, a Sea Dish" which might be thicker than a soup: in 1830 an English baked dish made with salmon and potato was called a chowder.[13]

In Merriam-Webster's dictionary chowder is defined as "a thick soup or stew made of seafood or corn with potatoes and onions and milk or tomatoes".[14]

Chowder as it is known today originated as a shipboard dish, and was thickened with the use of hardtack.[3][15] Chowder was brought to North America with immigrants from England and France and seafarers more than 250 years ago and became popular as a delicious dish, and is now a widely used dish as it is simple to prepare.[16]

In 1890, in the magazine American Notes and Queries, it was said that the dish was of French origin. Among French settlers in Canada it was a custom to stew clams and fish laid in courses with bacon, sea biscuits, and other ingredients in a bucket called a "chaudière", and it thus came to be invented. Then the Native Americans adopted it as "chawder", which was then corrupted as "chowder" by the Yankees.[17]

In the United States, early chowder making is traced to New England.[18] It was a bowl of simmering chowder by the sea side that provided in its basic form "sustenance of body and mind – a marker of hearth and home, community, family and culture". It is a food which evolved along the coastal shoreline of New England as a "congerie" of simple things, very basic and cooked simply. It is a simple dish of salt and pepper, potatoes and onion, pork and fish, cream and hard crackers, and not a sophisticated dish of the elite. Its simplicity made it attractive and it became a regional dish of the New Englanders, and their favorite recipe was "chowder master".[19] "Symbolically, functionally, mnemonically or dynamically" chowder has become a powerful means for New Englanders to define themselves as a community, a rich community with a deep past and value that distinguishes their region from all others. The dish has been made there for a long time and is imbibed into the community culture.[20] Etta M. Madden and Martha L. Finch observe that chowder provides "visceral memories that provided feelings of familiarity, comfort and continuity".[20]

A recipe formulated and published in 1894 by Charles Ranhofer, a famous chef of Delmonico's restaurant, was called "Chowder de Lucines" and had ingredients of pork, clams, potato (sliced to a seven sixteenths-inch size), onion, parsley, tomato, crackers garnished by thyme, salt and pepper.[21] Others in the same family, totally different from the New England clam chowder, are: "Fulton Market style", introduced in 1904 and made from clams, tomatoes, allspice, cloves, red pepper, and Worcester sauce; a "Vegetable Clam Chowder" introduced in 1929 and made of clams, chopped onions, diced carrots, stewed tomatoes, and thyme; "Coney Island Clam Chowder";[clarification needed] "New York Clam Chowder";[clarification needed] and "Manhattan Clam Chowder", a late entry after 1930.[21]

In most cases, particularly in the Maritime Provinces, Canadian chowder is thinner and more seafood-forward than its creamier American counterparts.

Considered a national dish of Bermuda,[25] the primary ingredients in Bermuda fish chowder include fish, tomato, and onion that is seasoned with black rum and a Sherry pepper sauce. The dish is of British origin, and was brought to the New World by the colonists.[25]

Clam chowder may be prepared with fresh, steamed clams or canned clams.[27] The "clam liquor" from steamed or canned clams may be retained for use in the soup,[27] and fresh or bottled clam juice may be used.[3][28] 21 January is the National New England Clam Chowder Day.[29][30]

Corn chowder is similar in consistency to New England clam chowder, with corn being used instead of clams. Additional vegetables that may be used in its preparation include potatoes, celery and onion.[34] Some are prepared using bacon as an ingredient.[34] Corn chowder may be prepared with fresh, frozen, or canned corn.[35]

Fish chowder is prepared with fish such as salmon or cod, and is similar to clam chowder in ingredients and texture. Ingredients used in fish chowder may include potato, onion, celery, carrot, corn and bacon.[36]

Southern Illinois Chowder, also referred to as "downtown chowder",[37] is a thick stew or soup that is very different from the New England and Manhattan chowders. The main ingredients are beef, chicken, tomatoes, cabbage, lima beans, and green beans.[37] Traditionally, squirrel meat was a common addition.[37][38] Southern Illinois chowder is a hearty dish that has been described as being closer in style to burgoo and Brunswick stew than coastal chowders.[37]

Seafood chowder is prepared with various types of seafood as a primary ingredient,[23] and may be prepared as a broth- or cream-style chowder. It is a popular menu item in New Zealand using ready-prepared mixed seafood, called "seafood marinara," "marinara mix", or simply "marinara." These terms are unique to New Zealand, Australia and South Africa.

Spiced haddock chowder is made with haddock fillets, carrot, potato, plain flour, bay leaves, peppercorns, mustard, and spices added to milk and cooked in a pot with butter.[39]

The White Castle restaurant serves a potato and bacon chowder.[40]

Use of preserved clams

In North America, as people moved west, some homemade preparations of traditional chowder used canned or bottled clams when fresh clams were not available.[3] In some places the ingredients were modified based upon other locally available foods such as salmon, corn and chicken.[3]

Mass-produced, canned varieties of chowder are manufactured and purveyed to consumers, such as Campbell's and Progresso's New England Clam Chowder,[23] among other brands.

Chowderat Wikipedia's sister projects
Retrieved from "https://en.wikipedia.org/w/index.php?title=Chowder&oldid=972387944"
Categories:
Hidden categories:
The article is a derivative under the Creative Commons Attribution-ShareAlike License. A link to the original article can be found here and attribution parties here. By using this site, you agree to the Terms of Use. Gpedia Ⓡ is a registered trademark of the Cyberajah Pty Ltd.