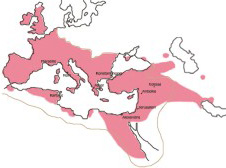 Christendom by A.D. 600 after its spread to Africa and Europe from the Middle East.

Christian nationalists have often cooperated across denominational lines, fostering a spirit of ecumenism in order to advance certain objectives.[13] 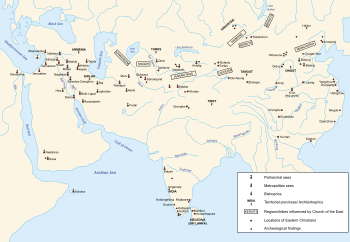 The Church of the East at its largest extent during the Middle Ages.

In the Middle Ages, efforts were made in order to establish a Pan-Christian state by uniting the countries within Christendom.[5][14] Christian nationalism played a role in this era in which Christians felt the impulse to recover lands in which Christianity flourished.[4] After the rise of Islam, certain parts of North Africa, East Asia, Southern Europe, Central Asia, and the Middle East lost Christian control.[15] In response, Christians across national borders mobilized militarily and a "wave of Christian reconquest achieved the recovery of Spain, Portugal, and southern Italy, but was unable to recover North Africa nor—from a Christian point of view, most painful of all—the Holy Land of Christendom."[15]

The state atheism of the former Eastern Bloc, which brought about a persecution of Christians, caused a rise in Christian nationalism in the West, as well as ecumenical cooperation among Christians across denominational lines.[16] For example, the United States, in 1956, adopted "In God We Trust" as its official motto "to differentiate itself from the Soviet Union, its Cold War enemy that was widely seen as promoting atheism."[17] During this time, Christian human rights non-governmental organisations, such as Voice of the Martyrs, were founded in order to provide support to Christians persecuted in the Communist Bloc, also engaging in activities such as Bible smuggling.[18] In the 1990s, the period surrounding the collapse of the Soviet Union led "a surge in the activity of religious groups and interests among broad segments of the population".[19] The revival of the Church occurred in these formerly Communist areas; Christian missionaries also entered the former Easter Bloc in order to engage in evangelism there, winning people back to Christianity.[20][21][22]

In recent years there has been a growing sentiment of nationalism between both Catholics and Protestants in Brazil. Politicians like Magno Malta and Jair Bolsonaro, and political parties like Patriota promote ultraconservative ideas, like rejection of LGBT rights, opposition to abortion, and anti-secularism. Most Christian nationalists in Brazil are in favor of ecumenism, while attacking and rejecting contact with non-Christians, more specifically Muslims and atheists.[23]

In the background of World War I, German Christian nationalism was reflected by Lutheranism, romanticism, idealism, and Immanence.[24] 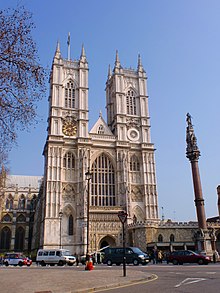 The coronation of British monarchs, who are styled as the Defender of the Faith, takes place in Westminster Abbey, a cathedral of the Church of England, which is the established church of that nation.

In the background of World War I, British Christian nationalism was reflected by empiricism, realism, and individualism.[24]

In Poland, nationalism was always characterized by loyalty to the Roman Catholic Church. Groups like the National Revival of Poland use slogans like Wielka Polska Katolicka (Great Catholic Poland) and protest vigorously against legalization of gay marriage and abortion.[27] Conservative religious groups connected with Radio Maryja are often accused of harboring nationalist and antisemitic attitudes.[28]

Religious nationalism characterized by communal adherence to Eastern Orthodoxy and national Orthodox Churches is found in many states of Eastern Europe and in the Russian Federation. Many Russian Neo-Fascist and Neo-Nazi groups, such as the Russian National Unity, call for an increased role for the Russian Orthodox Church. 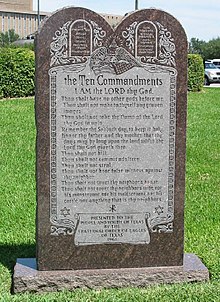 A monument of the Ten Commandments at the Texas State Capitol
Further information: Christian right and Accommodationism

Christian nationalism in the United States manifests itself through the promotion of religious art and symbolism in the public square, such as the displaying of the Ten Commandments and the national motto "In God We Trust",[29] which came into force in order to distinguish the United States from the state atheism of the former Soviet Union.[17] The Foundation for Moral Law, for example, was founded for this purpose.[30] The ideology also advocates for public policy to be supported by religious beliefs, such as enshrining the sanctity of life in law through the buttressing of the pro-life movement.[29] Christian nationalists support Sunday blue laws in keeping with traditional first-day Sabbatarian principles; the Lord's Day Alliance (LDA) was organized by representatives of various Christian denominations to this end.[31] In 2018, the Congressional Prayer Caucus Foundation began Project Blitz to achieve these goals.[29]

The National Reform Association is an organization, founded in 1864 and active to this day, that seeks to introduce a Christian amendment to the Constitution of the United States.[32] Advocacy groups, such as the Alliance Defending Freedom and First Liberty Institute, work to defend their view of the free exercise clause of the First Amendment.[33]

The Christian Liberty Party is a political party that sees the United States as a Christian country.[34]

Retrieved from "https://en.wikipedia.org/w/index.php?title=Christian_nationalism&oldid=971574355"
Categories:
Hidden categories:
The article is a derivative under the Creative Commons Attribution-ShareAlike License. A link to the original article can be found here and attribution parties here. By using this site, you agree to the Terms of Use. Gpedia Ⓡ is a registered trademark of the Cyberajah Pty Ltd.