Christopher Gustavus Memminger (born Christoph Gustav Memminger; January 9, 1803 – March 7, 1888) was a German-born American politician and one of the founding fathers of the Confederate States. He was the principal author of the Provisional Constitution (1861), as well as the founder of the nation's financial system. As the first Confederate States Secretary of the Treasury, Memminger was the main author of the economic policies of the Jefferson Davis administration.

Memminger was born on January 9, 1803, in Vaihingen, Württemberg (present-day Stuttgart-Vaihingen, Germany). His father, Gottfried Memminger, was an officer who died a month after his son's birth.[1] His mother, Eberhardina (née Kohler) Memminger, immigrated to Charleston, South Carolina, but died of yellow fever in 1807. Christopher was placed in an orphanage.[2] His fortunes changed when, at the age of eleven, he was taken under the care of Thomas Bennett, a prominent lawyer and future Governor. He entered South Carolina College at the age of 12 and graduated second in his class at 16. Memminger passed the bar in 1825 and became a successful lawyer. He married Mary Withers Wilkinson in 1832.

He was a leader of the opponents during the nullification excitement. He published The Book of Nullification (1832–33) which satirized the advocates of the doctrine in biblical style.[3] He entered state politics and served in the South Carolina state legislature from 1836 to 1852 and 1854 to 1860, where for nearly twenty years he was the head of the finance committee.[4] Memminger was a staunch advocate of education and helped give Charleston one of the most comprehensive public school systems in the country.[5] In 1859, after John Brown's raid, he was commissioned by South Carolina to consult with other delegates in Virginia as to the best method of warding off attacks of abolitionists.[6] 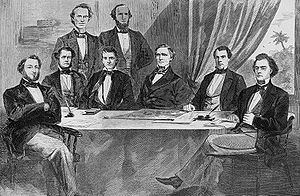 Memminger depicted on an 1862 CS$5 banknote.

Memminger was considered a moderate on the secession issue, but after Lincoln's election, he decided secession was necessary. When South Carolina seceded from the United States in 1860, Memminger was asked to write the Declaration of the Immediate Causes Which Induce and Justify the Secession of South Carolina from the Federal Union which outlined the reasons for secession. When other states also seceded, he was selected as a South Carolina delegate to the Provisional Congress of the Confederate States, and was the chairman of the committee which drafted the Provisional Constitution of the Confederate States. The twelve-man committee produced a provisional constitution in only four days.

When Jefferson Davis formed his first cabinet, Memminger was chosen as Secretary of the Treasury on February 21, 1861. It was a difficult task, in view of the financial challenges facing the Confederacy. He attempted to finance the government initially via bonds and tariffs (and confiscation of gold from the United States Mint in New Orleans), but soon found himself forced to more extreme measures such as income taxation and fiat currency. He had been a supporter of hard currency before the war, but found himself issuing increasingly devalued paper money, which by war's end was worth less than two percent of its face value in gold.

Memminger resigned his post as Secretary of the Treasury on July 1, 1864 and was replaced by fellow South Carolinian G. A. Trenholm. He returned to his summer residence in Flat Rock, North Carolina. In the post-war years, he returned to Charleston, received a presidential pardon in 1866, and returned to private law practice and business investment. He also continued his work on developing South Carolina's public education system and was voted to a final term in the state legislature in 1877.

Memminger was featured on the Confederate $5.00 bill.[7]

Retrieved from "https://en.wikipedia.org/w/index.php?title=Christopher_Memminger&oldid=920430236"
Categories:
Hidden categories:
The article is a derivative under the Creative Commons Attribution-ShareAlike License. A link to the original article can be found here and attribution parties here. By using this site, you agree to the Terms of Use. Gpedia Ⓡ is a registered trademark of the Cyberajah Pty Ltd.