Illustration of a chunkey player based on a Mississippian gorget design. Artist Herb Roe

Chunkey (also known as chunky, chenco, tchung-kee or the hoop and stick game [1]) is a game of Native American origin. It was played by rolling disc-shaped stones across the ground and throwing spears at them in an attempt to land the spear as close to the stopped stone as possible. It originated around 600 CE in the Cahokia region of what is now the United States (near modern St. Louis, Missouri). Chunkey was played in huge arenas as large as 47 acres (19 ha) that housed great audiences designed to bring people of the region together (i.e. Cahokians, farmers, immigrants, and even visitors).[2] It continued to be played after the fall of the Mississippian culture around 1500 CE. Variations were played throughout North America. Early ethnographer James Adair translated the name to mean "running hard labor".[2] Gambling was frequently connected with the game, with some players wagering everything they owned on the outcome of the game. Losers were even known to commit suicide.[2][3] 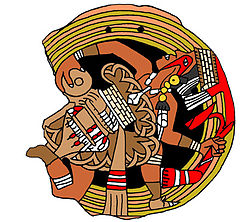 The falcon dancer/warrior/chunkey player was an important mythological figure from the Southeastern Ceremonial Complex. Many different representations of the theme have been found all over the American Southeast and Midwest. Throughout the many different centuries of its portrayal, certain distinct motifs are repeated:

Although the figure described as the falcon dancer/warrior/chunkey player is not always shown in the act of playing chunkey, the placing of many of the motifs helps identify them as the same figure. Some motifs usually associated with the figure, such as the scalp, severed heads, broken chunkey sticks, and the ethnohistoric record associating it with gambling, seem to indicate the seriousness of the game. The price of defeat in the mythological record may have been the forfeiture of one's life and head.[4] 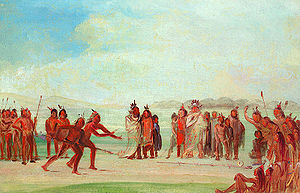 "Tchung-kee, a Mandan Game Played with a Ring and Pole" by artist George Catlin

Many Native Americans continued playing the chunkey game long after European contact, including the Muscogee (Creeks), Chickasaw, Chumash,[1] Choctaw, and the Mandans, as witnessed by the artist George Catlin in 1832,

The game of Tchung-kee [is] a beautiful athletic exercise, which the Mandan seem to be almost unceasingly practicing whilst the weather is fair, and they have nothing else of moment to demand their attention. This game is decidedly their favourite amusement, and is played near to the village on a pavement of clay, which has been used for that purpose until it has become as smooth and hard as a floor. ... The play commences with two (one from each party), who start off upon a trot, abreast of each other, and one of them rolls in advance of them, on the pavement, a little ring of two or three inches in diameter, cut out of a stone; and each one follows it up with his 'tchung-kee' (a stick of six feet in length, with little bits of leather projecting from its sides of an inch or more in length), which he throws before him as he runs, sliding it along upon the ground after the ring, endeavouring to place it in such a position when it stops, that the ring may fall upon it, and receive one of the little projections of leather through it.

In the early colonial era, it was still the most popular game among American Indians of the Southeast.[6] Muscogee chunkey yards were a large carefully cleared and leveled area, surrounded by embankments on either side, with a pole in the center, and possibly two more at either end. The poles were used for playing another indigenous game, the ball game.[7] The stones, valuable objects in themselves, were owned by the town or clans, not by individuals, and would be carefully preserved.

Retrieved from "https://en.wikipedia.org/w/index.php?title=Chunkey&oldid=950424642"
Categories:
Hidden categories:
The article is a derivative under the Creative Commons Attribution-ShareAlike License. A link to the original article can be found here and attribution parties here. By using this site, you agree to the Terms of Use. Gpedia Ⓡ is a registered trademark of the Cyberajah Pty Ltd.