Jump to navigation Jump to search
Not to be confused with Chumash people.
ethnic group 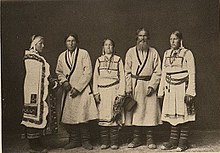 The Chuvash people (/tʃʊˈvɑːʃ/; Chuvash: чăваш, IPA: [t͡ɕəˈʋaʂ]; Russian: чуваши, pronounced [t͡ɕʊˈvaʂɨ]) are a Turkic ethnic group, native to an area stretching from the Volga Region to Siberia. Most of them live in the Republic of Chuvashia and surrounding areas, although Chuvash communities may be found throughout the Russian Federation.

There is no universally accepted etymology of the word Chuvash, but there are two main theories that try to explain it: one suggests that the word Chuvash may be derived from Common Turkic jăvaš (‘friendly’, ‘peaceful’), as opposed to şarmăs (‘warlike’). Another theory is based on the Tabghach, an early medieval Xianbei clan and founders of the Northern Wei dynasty in China. The Old Turkic name Tabghach (Tuoba in Mandarin) was used by some Inner Asian peoples to refer to China long after this dynasty. Gerard Clauson has shown that through regular sound changes, the clan name Tabghach may have transformed to the ethnonym Chuvash.[14] 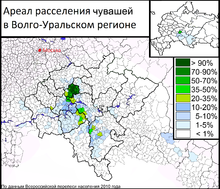 The Turkic ancestors of the Chuvash people are believed to have come from central Siberia, where they lived in the Irtysh basin (between the Tian Shan and Altay) from at least the end of the third millennium BC. In the beginning of the first century AD, the Bulgars started moving west through Zhetysu and the steppes of modern-day Kazakhstan, reaching the North Caucasus in 2nd–3rd centuries AD. There they established several states (Old Bulgaria on the Black Sea coast and the Suar Duchy in modern-day Dagestan.

Old Bulgaria broke up in the second half of the 7th century after a series of successful Khazar invasions. Some of its population fled north, to the Volga-Kama region, where they established Volga Bulgaria, which eventually became extremely wealthy: its capital being the 4th largest city in the world. Shortly after that, the Suvar Duchy was forced to become a vassal state of Khazaria. About half a century later, the Suvars took part in the Arab–Khazar wars of 732–737. The adoption of Islam in the early tenth century in Volga Bulgaria led to most of its people (including the Chuvash) to embrace the religion.[15]

After the collapse of Volga Bulgaria by the Mongols in 1236, the Golden Horde kept control of the region until its slow dissolution in 1438. The Kazan Khanate then became the new authorities of the region and of the Chuvash. The modern name 'Chuvash' began to appear in records starting from the sixteenth century from Russian and other foreign sources.[15]

In 1552, the Russians conquered the Kazan Khanate and its territories. The subsequent centuries saw the Christianization and Russification of the Chuvash. During this period, most Chuvash converted to Orthodox Christianity (sometimes by force) but Russification was never achieved. However, a few Chuvash continued being Muslim.[15]

The eighteenth and nineteenth century saw the revival of Chuvash culture and the publication of many educational, literary, and linguistic works along with the establishment of schools and other programs. The Chuvash language began being used in local schools and a special written script for the Chuvash language was created in 1871.[15]

On June 24 1920, the Chuvash Autonomous Region was established but was renamed the Chuvash Autonomous Soviet Socialist Republic in April 21, 1925. Around this time saw the rise of Chuvash nationalism but the Soviet authorities attempted to suppress these nationalist movements by redrawing the borders of the republic so that many Chuvash will be living in neighboring republics or Russian districts. During most of the Soviet period, the Chuvash were subjected to Russification campaigns and propaganda. The Chuvash language vanished from educational and public use. In 1989, another Chuvash cultural revival began partly in response to these changes. Soon, the Chuvash language was once again used in educational, public, and political life.[15]

Today, the Chuvash language and culture is taught in schools in the Chuvash Republic and in areas outside that have large Chuvash populations. Chuvash around Russia also have media available to them in their local communities.[15]

They speak the Chuvash language and have some pre-Christian traditions. The Chuvash language is Turkic and is the only Oghur Turkic language that survives. The language has been influenced by Tatar, Russian, and Finno-Ugric languages. It has two to three dialects.[15] In addition to Chuvash,[16] many people also use the Russian language.

Today Chuvash people are Eastern Orthodox Christians and belong to the Russian Orthodox Church. They retain some pre-Christian Tengrism traditions in their cultural activities. They syncretized Orthodox Christianity and Tengriism. Parallel pray in the shrines called keremet and sacrifice geese there. One of the main shrines is located in the town of Bilyarsk. There are some Chuvash who follow Islam which also has many traces of pre-Islamic beliefs and rituals.[15]

There are rival schools of thought on the origin of the Chuvash people. One is that they originated from a mixing between the Turkic Sabir tribes of Volga Bulgaria and, according to some researches, local Finno-Ugric tribes.[17]

According to another theory, the Chuvash may be descended from the Volga Bulgars.[18]

They have been subjected to much infusion and influence, not only from Russian and Turkic peoples, but also from neighboring Finnic tribes, with whom they were persistently and mistakenly identified for centuries, perhaps aided by the fact that the Chuvash language is a highly divergent form of Turkic, and was not easily recognized as such.[18] Chuvash is classified, alongside the extinct Bulgar language, as the only remaining member of the Oghuric branch of the Turkic language family.

Physical anthropologists using the racial frameworks of the early 20th Century saw the Chuvash as a mixed Finno-Ugric and Turkic people.[19][18]

Subclades of Y-DNA haplogroups R1 and N are most common among the Chuvash. According to Rootsi et al. 2004, Tambets et al. 2004 (79 samples), and Trofimova 2005 (43 samples) the following distribution of haplogroups is obtained:[20]

Haplogroups Q and C are rare among Chuvashes. Chuvash carriers of Haplogroup R1a (19% in hundreds of samples) are Balto-Slavic Z282 subclade.[21]

According to autosomal analyses the present-day Chuvash speak a Turkic language but are genetically a mix of East-Asian and European elements. They are generally closer to Europeans with some genetic input from Siberia.[23]

An autosomal analysis (2015) detected an indication of Oghur and possibly Bulgar ancestry in modern Chuvash. These Oghur and Bulgar tribes brought the Chuvash language with them.[24] Another study found some Finno-Ugric component in Chuvash people.[25]

Retrieved from "https://en.wikipedia.org/w/index.php?title=Chuvash_people&oldid=939430148"
Categories:
Hidden categories:
The article is a derivative under the Creative Commons Attribution-ShareAlike License. A link to the original article can be found here and attribution parties here. By using this site, you agree to the Terms of Use. Gpedia Ⓡ is a registered trademark of the Cyberajah Pty Ltd.