Circle of a sphere

Small circle of a sphere. 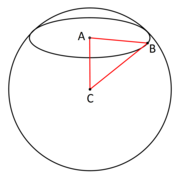 In the geographic coordinate system on a globe, the parallels of latitude are small circles, with the Equator the only great circle. By contrast, all meridians of longitude, paired with their opposite meridian in the other hemisphere, form great circles.

The diameter of the sphere which passes through the center of the circle is called its axis and the endpoints of this diameter are called its poles. A circle of a sphere can also be defined as the set of points at a given angular distance from a given pole.

When the intersection of a sphere and a plane is not empty or a single point, it is a circle. This can be seen as follows:

Now consider a point D of the circle C. Since C lies in P, so does D. On the other hand, the triangles AOE and DOE are right triangles with a common side, OE, and legs EA and ED equal. Therefore, the hypotenuses AO and DO are equal, and equal to the radius of S, so that D lies in S. This proves that C is contained in the intersection of P and S.

As a corollary, on a sphere there is exactly one circle that can be drawn through three given points.[2]

The proof can be extended to show that the points on a circle are all a common angular distance from one of its poles.[3]

To show that a non-trivial intersection of two spheres is a circle, assume (without loss of generality) that one sphere (with radius

) is centered at the origin. Points on this sphere satisfy

Also without loss of generality, assume that the second sphere, with radius

, is centered at a point on the positive x-axis, at distance

from the origin. Its points satisfy

The intersection of the spheres is the set of points satisfying both equations. Subtracting the equations gives

In the singular case

, the spheres are concentric. There are two possibilities: if

, the spheres coincide, and the intersection is the entire sphere; if

Retrieved from "https://en.wikipedia.org/w/index.php?title=Circle_of_a_sphere&oldid=942362424"
Categories:
The article is a derivative under the Creative Commons Attribution-ShareAlike License. A link to the original article can be found here and attribution parties here. By using this site, you agree to the Terms of Use. Gpedia Ⓡ is a registered trademark of the Cyberajah Pty Ltd.