Citico Creek Wilderness is a 16,226-acre (66 km2) wilderness area within the Cherokee National Forest in the U.S. state of Tennessee. The wilderness contains the entire upper drainage of Citico Creek, which consists of the north and south forks and at least eight tributaries. Three steep-sided ridges descend west from the crest of the Unicoi Mountains — Brush Mountain, Pine Ridge, and Sassafras Ridge.[1]

Citico Creek is named after the ancient Overhill Cherokee village of Citico, which was located at the creek's mouth along the Little Tennessee River. The village site was inundated by the creation of Tellico Reservoir in 1979.[2]

Most of the Citico Creek watershed was logged in the early 1920s by the Babcock Lumber Company, and most of what was not logged was destroyed by a massive forest fire in 1925. The United States Forest Service purchased the devastated land in the 1930s, and its policy of allowing natural processes to heal the forest has led to the development of a mature, second-growth deciduous forest along Citico Creek. 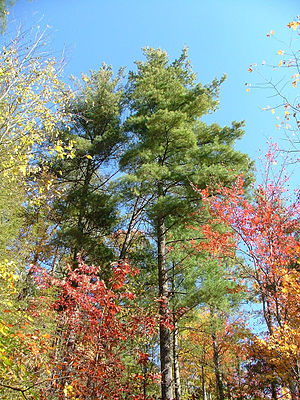 Diverse cove hardwood forests— which include yellow poplar, white oak, red oak, and hemlock— are found in the bottomlands along stream beds. The ridge slopes are covered by a mixed hardwood-pine forest consisting primarily of white oak, red oak, and hickory in moist areas and substantial stands of white pine, pitch pine, and shortleaf pine on drier slopes and ridgecrests.[3]

While most of the forest is second-growth, two pockets of old growth forest remain within the wilderness area. One is a 187-acre (0.76 km2) stand of primarily beech and maple in the vicinity of Falls Branch Falls, which is easily accessible from the Cherohala Skyway via the Falls Branch Falls Trail. The other is an isolated 200-acre (0.81 km2) patch of hemlock near Glenn Gap.[4]

Retrieved from "https://en.wikipedia.org/w/index.php?title=Citico_Creek_Wilderness&oldid=798085369"
Categories:
Hidden categories:
The article is a derivative under the Creative Commons Attribution-ShareAlike License. A link to the original article can be found here and attribution parties here. By using this site, you agree to the Terms of Use. Gpedia Ⓡ is a registered trademark of the Cyberajah Pty Ltd.