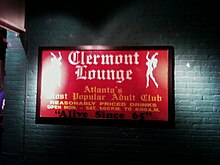 The Clermont Lounge is Atlanta's first and longest continually operating strip club, opened in 1965. Located in the basement of the Clermont Motor Hotel at 789 Ponce De Leon Avenue, in the Poncey-Highland neighborhood, the Clermont has survived multiple attempts at being closed by the Atlanta city government, and has established a nationwide reputation for its kitschy atmosphere and unusual dancers.[citation needed] The Clermont has been featured on an episode of Insomniac with Dave Attell, and celebrities including Anthony Bourdain, Marilyn Manson, Ashton Kutcher, Kid Rock, Steven Yeun, Skinny Lister, Lady Gaga, Eric Roberts, Ming Chen, Jason Zimmerman and the Guys Weekend as well as David Cross and Bombay Bicycle Club have been known to visit the Clermont when in Atlanta. Visitors to the Clermont usually alternate between a few handfuls of regulars and large numbers of college students, newcomers to town, and tourists lured in by tales of the Clermont's myriad charms.

The Clermont does not serve food or draft beer. The single stripper's stage is located in the middle of a circular bar, and the dancers choose (and pay for) their own songs on the in-house jukebox, as the club normally does not have an actual DJ. The Clermont is perhaps best known for featuring some dancers who do not meet the traditional physical standards for strippers, the most famous of whom is Blondie, noted for her ability to crush empty beer cans between her breasts as well as for her poetry. 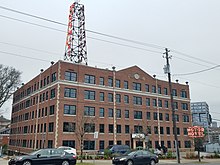 The Clermont Motor Hotel was built in 1924 and was originally an apartment building after its construction, but was later renovated to a hotel format. An early advertisement for a nightclub in the basement space is dated 1947 and the club was the "Anchorage Club". Later tenants included the "Gypsy Club" (c. 1951-1954), and "The Continental Room" (1954) before returning to the Anchorage name from about 1956 until 1963, when it was briefly known as the "Atlanta Playboy Club", an unofficial attempt to capitalize on the popularity of Hugh Hefner's magazine. A lawsuit closed the Atlanta Playboy Club. By 1965, the "Jungle Club" opened its doors within the Clermont Hotel. In 1968, the "Clermont Lounge" opened for business and has remained in place ever since. The entire building was sold to new owners in 2003.

Fairway Capital put the property on the market for sale in 2010. Clermont Hotel Partners LLC eventually bought it in January 2013 with the intent to redevelop the property as a boutique hotel.[3] In 2018, the hotel reopened after an extensive renovation that brought the facility up to code while restoring and preserving the iconic details of the Clermont[4]

Just a few months before his death of a heroin overdose, shock rocker GG Allin wrote the song "Hotel Clermont (My Whorehouse)", released as the B-side to his 1993 single "Look Into My Eyes and Hate Me", during a period spent living in Room 216 of the adjacent hotel.[5]

Bubba Sparxx released the track 'Claremont Lounge', which uses a different spelling but was likely in reference to the Clermont.[6]

Retrieved from "https://en.wikipedia.org/w/index.php?title=Clermont_Lounge&oldid=971796255"
Categories:
Hidden categories:
The article is a derivative under the Creative Commons Attribution-ShareAlike License. A link to the original article can be found here and attribution parties here. By using this site, you agree to the Terms of Use. Gpedia Ⓡ is a registered trademark of the Cyberajah Pty Ltd.