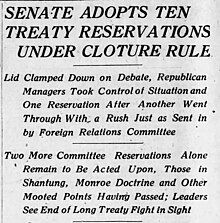 Headline in The Philadelphia Inquirer of 16 November 1919, reporting the first use of cloture by the United States Senate.

Cloture (UK: US: /ˈkloʊtʃər/,[1][2] also UK: /ˈkloʊtjʊər/),[3] closure[4] or, informally, a guillotine,[4] is a motion or process in parliamentary procedure aimed at bringing debate to a quick end. The cloture procedure originated in the French National Assembly, from which the name is taken. Clôture is French for "the act of terminating something". It was introduced into the Parliament of the United Kingdom by William Ewart Gladstone to overcome the obstructionism of the Irish Parliamentary Party and was made permanent in 1887. It was subsequently adopted by the United States Senate and other legislatures. The name cloture remains in the United States;[3] in Commonwealth countries it is usually closure[3] or, informally, guillotine; in the United Kingdom closure and guillotine are distinct motions.[5][6]

In Australia, the procedure by which finite debating times for particular bills are set, or protracted debates are brought to a close, is referred to as a "guillotine". Generally, a minister will declare that a bill must be considered as urgent, and move a motion to limit debating time. The declaration and motion may refer to a single bill, or to multiple bills or packages of bills. A guillotine motion may not be debated or amended, and must be put to a vote immediately.[4]

Closure in Canada was adopted by the House of Commons in 1913 by Conservative Prime Minister Robert Borden. The new closure rule was immediately tested by the government only a few days after its adoption during debate at the Committee of the Whole stage of the Naval Aid Bill.[7] "Closure" is the term used in Canada; "cloture" and "guillotine" are not used.[citation needed]

Procedure on closure in Canada is governed under Standing Order no. 57 of the House of Commons and consists of three parts: Notice of closure, a motion of closure, and a final period of debate before final voting on the bill being closured.

Notice of closure is an oral statement announcing intention to call for closure given by any Minister at a prior sitting of the Committee of the Whole. The notice need not be the day immediately prior to the sitting at which the bill will be closured, but cannot be in the same sitting as the final motion of closure.

The motion of closure, referred to as a motion "that the debate shall not be further adjourned", is passed by a simple majority of the House of Commons, although in the event of a tie, the Speaker of the House will apply Speaker Denison's rule to issue the casting vote.

Should the motion of closure pass, all members are given a single period in which to speak lasting no more than 20 minutes. If the final period of speaking to the bill has not been finished by 8:00 p.m. that same day, no MP may speak after that point, and the bill moves to a final vote.[8]

The first cloture in Hong Kong was introduced in the Legislative Council of Hong Kong on 17 May 2012, by Tsang Yok-sing (President of the Legislative Council of Hong Kong), to abruptly halt filibuster during debate at the Committee of the Whole stage of the Legislative Council (Amendment) Bill 2012.[9] The motion to end debate was submitted by Council member Philip Wong Yu-hong some time after 4 am Hong Kong time, after a marathon session that lasted over 33 hours. Wong stood up and suggested that legislatures in other countries have a procedure called "cloture motion", and suggested Council President should end debate immediately. President Tsang agreed and said that he considered ending debate even without Wong's suggestion because he would not allow debate to go on endlessly. Cloture is not defined by any rule or precedent of the Legislative Council. Tsang made reference to Standing Order 92, which stated "In any matter not provided for in these Rules of Procedure, the practice and procedure to be followed in the Council shall be such as may be decided by the President who may, if he thinks fit, be guided by the practice and procedure of other legislatures".[10] Standing Order 92 therefore may implicitly give Council President discretion on whether he should or should not follow the cloture rules of other legislatures, but this is up to debate. Legislative Council President Tsang chose to end debate without calling for a cloture vote, which is questionable. Council member Leung Kwok-hung then stood up and said that he had never heard of cloture without a vote anywhere else and suggested there should have been a cloture vote.

Cloture was again invoked by Tsang Yok-sing on 13 May 2013 to halt debate of the 2013 Appropriation Bill.

In the New Zealand House of Representatives, any MP called to speak may move a closure motion. If the length of the debate is not fixed by standing orders or the Business Committee, the Speaker may decide to put the closure motion to a vote, which is carried by a simple majority.[11]

Specific to legislation, a guillotine motion, formally an allocation of time motion, limits the amount of time for a particular stage of a bill.[6] Debate ceases when the allotted time expires; a single vote is taken immediately to pass the stage of the bill and, in the case of a committee stage or report stage, to accept all undebated sections and government amendments. The use of guillotines has been replaced by the programme motion, where the amount of time for each stage is agreed after a bill's second reading.[6][12] Both guillotine motions and programme motions are specific to the Commons; the Lords does not permit time restrictions.[6][12]

On 24 January 1881, the second Gladstone ministry attempted to move the first reading of the Protection of Person and Property Bill, a controversial response to the Irish agrarian disturbances known as the Land War.[13][14] The Irish Parliamentary Party (IPP) under Charles Stewart Parnell responded with the most extreme example of its policy of obstructionism by filibuster; after two sittings lasting 22 hours and then 41 hours, the Speaker of the Commons, Henry Brand simply refused to recognise any further IPP MPs wishing to speak, and in the early hours of 2 February 1881 he put the motion, which was passed.[14][15] The IPP MPs objected that this was an abuse by the speaker of their rights as members,[16] and the government responded by formalising the process as an amendment to the standing orders, moved by Gladstone on 3 February 1881:[14][17]

That, if upon Notice given a Motion be made by a Minister of the Crown that the state of Public Business is urgent, and if on the call of the Speaker 40 Members shall support it by rising in their places, the Speaker shall forthwith put the Question, no Debate, Amendment, or Adjournment being allowed; and if, on the voices being given he shall without doubt perceive that the Noes have it, his decision shall not be challenged, but, if otherwise, a Division may be forthwith taken, and if the Question be resolved in the affirmative by a majority of not less than three to one, the powers of the House for the Regulation of its Business upon the several stages of Bills, and upon Motions and all other matters, shall he and remain with the Speaker, until the Speaker shall declare that the state of Public Business is no longer urgent, or until the House shall so determine upon a Motion, which after Notice given may be made by any Member, put without Amendment, Adjournment, or Debate, and decided by a majority

Gladstone described it as "a subject of considerable novelty, and of the extremest gravity",[18] and many Irish members objected and were suspended from the House before the amendment motion was moved.[14][19]

In 1882, Gladstone proposed a major overhaul of the rules of procedure, and on 20 February debate began on the first resolution, on "putting the question".[14][20] The session beginning in November 1882 was devoted entirely to the new rules,[21] and the motion on putting the question was passed, after 19 days' debate, on 10 November 1882:[22]

The rule was invoked only twice by Gladstone's ministry,[13] and the second Salisbury ministry secured its amendment, after six days' debate, on 1 March 1887:[14][13][23]

By 1909, the closure was applicable in committees and to motions as well as in the house and to bills.[14]

In 2000, the Select Committee on the Modernisation of the House of Commons recommended discontinuing the use of allocation of time motions for bills, and instead passing a programme motion to make a programme order.[24] This was accepted by the Commons on 7 November 2000.[24] One of the Cameron–Clegg coalition's most significant parliamentary defeats was in 2012, on the programme motion for the House of Lords Reform Bill 2012; some rebel MPs agreed with the substance of the bill but felt not enough time had been allocated to its debate.[25]

On 8 March 1917, during World War I, a rule allowing cloture of a debate was adopted by the Senate on a 76–3 roll call vote[26] at the urging of President Woodrow Wilson,[27] after a group of 12 anti-war senators managed to kill a bill that would have allowed Wilson to arm merchant vessels in the face of unrestricted German submarine warfare.[28] This was successfully invoked for the first time on 15 November 1919,[29] during the 66th Congress, to end a filibuster on the Treaty of Versailles.[30]

The Senate's cloture rule originally[31] required a supermajority of two-thirds of all senators "present and voting" to be considered filibuster-proof.[32][33] For example, if all 100 senators voted on a cloture motion, 67 of those votes would have to be for cloture for it to pass; however if some senators were absent and only 80 senators voted on a cloture motion, only 54 would have to vote in favor.[34] However, it proved very difficult to achieve this. The Senate tried 11 times between 1927 and 1962 to invoke cloture but failed each time. Filibuster use was particularly heavy by Democratic senators from southern states to block civil rights legislation.[35]

In 1975, the Democratic Senate majority, having achieved a net gain of four seats in the 1974 Senate elections to attain a strength of 61 (with an additional independent senator caucusing with them for a total of 62), reduced the necessary supermajority to three-fifths (60 out of 100).[36] However, as a compromise to those who were against the revision, the new rule also changed the requirement for determining the number of votes needed for a cloture motion's passage from those senators "present and voting" to those senators "duly chosen and sworn". Thus, 60 votes for cloture would be necessary regardless of whether every senator voted. The only time a lesser number would become acceptable is when a Senate seat is vacant. For example, if there were two vacancies in the Senate, thereby making 98 senators "duly chosen and sworn", it would take only 59 votes for a cloture motion to pass.[34]

The new version of the cloture rule requiring three-fifths (60%) rather than two-thirds (66.7%) approval, which has remained in place since 1975, makes it considerably easier for the Senate majority to invoke cloture. Even so, a successful cloture motion on legislation is uncommon.

Bills considered under the reconciliation process established in 1974 (certain bills concerning spending and the budget) cannot be filibustered and therefore don't require a supermajority cloture vote.

The U.S. House of Representatives does not have a cloture procedure, since filibustering is not possible in that body.

The three-fifths version of the cloture rule does not apply to motions to end filibusters relating to Senate Rule changes. To invoke cloture to end debate over changing the Senate rules, the original version of the rule (two-thirds of those Senators "present and voting") still applies.[37]

The procedure for "invoking cloture", or ending a filibuster, is as follows:

After cloture has been invoked, the following restrictions apply:

Retrieved from "https://en.wikipedia.org/w/index.php?title=Cloture&oldid=964485062"
Categories:
Hidden categories:
The article is a derivative under the Creative Commons Attribution-ShareAlike License. A link to the original article can be found here and attribution parties here. By using this site, you agree to the Terms of Use. Gpedia Ⓡ is a registered trademark of the Cyberajah Pty Ltd.