College Park is a city in Fulton and Clayton counties, Georgia, United States, adjacent to the southern boundary of the city of Atlanta. As of the 2010 census, the population was 13,942.[5] Hartsfield–Jackson Atlanta International Airport is partially located in the city's boundaries (including the domestic terminal, Concourse T, Concourse A, and about two-thirds of Concourse B), and the Georgia International Convention Center, owned and operated by the City of College Park, is within the city limits.[6][7] The city is home to the fourth largest urban historical district registered with the National Register of Historic Places in the state of Georgia.[8][9] As of November 2019, the city is also home to the Gateway Center Arena, home of the College Park Skyhawks and Atlanta Dream.

College Park's City Hall is 8 miles (13 km) southwest of downtown Atlanta. Interstate 85 passes through the city and merges with Interstate 285, the perimeter highway around Atlanta, for a short distance in the southern part of College Park. I-85 exits 69 through 72 and I-285 exits 60 and 62 are located within the College Park city limits. The western part of Hartsfield–Jackson Airport, including its domestic terminal, occupies the eastern side of the city.

The College Park Station is the primary station for College Park, located just south of Downtown, and is the third busiest station in the MARTA Rail System, with a weekday average of 9,023 entries.[11] It is serviced by both the Gold Line and the Red Line during the day,[12] and only the Gold Line after 9:00 PM.[13] 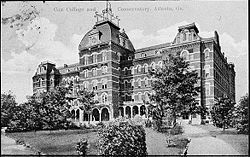 The community that would become College Park was founded as Atlantic City in 1890 as a depot on the Atlanta and West Point Railroad. The town was renamed Manchester when it was incorporated as a city in 1891. It was renamed again as the city of College Park in 1896. The city's name came from being the home of Cox College (where the city hall and other buildings now stand) and Georgia Military Academy (now the Woodward Academy). The east-west avenues in College Park are named for Ivy League colleges, and the north-south streets are named for influential College Park residents.[16]

The history of College Park has been closely linked with what is now known as Hartsfield–Jackson Atlanta International Airport — airport development having spurred several radical changes to the landscape of the municipality over the course of the 20th century.[17] In 1966, a study funded by the Department of Housing and Urban Development suggested that the introduction and expansion of jet aircraft travel would place the airport and surrounding communities, including College Park, into conflict; ultimately, the study concluded that "the only effective way to control the use of land is to own it," suggesting that the airport would have to acquire the properties it would be in conflict with in order to expand.[18]

In the 1970s and 1980s, large swaths of property in College Park were purchased using information detailed in The Hartsfield-Jackson Atlanta International Airport Noise Land Reuse Plan, which allowed the airport to apply for federal funding to purchase property deemed to be in so-called "noise land."[19][20] The 1985 Chuck Norris film Invasion U.S.A. was notoriously filmed in these abandoned portions of College Park; houses owned by the City of Atlanta and the FAA were allowed to be blown up to simulate bazooka attacks, a decision that has faced modern day criticism due to the fact that nearby properties were still in the process of being purchased.[21][20] This site would eventually, in 2003, in part be home to the Georgia International Convention Center; the center officially opened in 1985 at a separate location, but was relocated to the area in response to planned airport runway expansions.[22] Today, the GICC is the second largest convention center in Georgia, featuring a carpeted ballroom and multiple spaces for meetings, conferences and conventions. It is the only convention center in the country that also houses a SkyTrain with direct rail access to an international airport.[citation needed] Directly next to the Georgia International Convention Center is the Gateway Center Arena, which opened in November 2019, home to the NBA's G-League College Park Skyhawks and where the WBNA's Atlanta Dream will play their 2020 season.[23]

In 1978, the College Park Historical Society was founded in order to combat proposed northward expansion of the airport; the society succeeded in lobbying against proposed flight paths over the neighborhood colloquially known as Historic College Park, as well as registered swaths of homes and the Main Street commercial district with the National Register of Historic Places, eventually resulting in the establishment of the College Park Historic District.[20]

Between the 1980s and the early 2000s, as part of continued execution of the FAA noise abatement program, the City of Atlanta and the FAA purchased roughly 320 acres of property (containing residential structures, churches, and some small commercial buildings) immediately adjacent to the west side of downtown College Park, resulting in a multitude of properties sitting abandoned for decades.[24] The totality of these eventually abandoned properties purchased between the 1970s and the 2000s have been described as a major player in shaping a negative public image of the city, second only to the perception of crime in the area.[25]

Although the Atlanta hip hop music scene in the 1980s and 1990s was largely credited to artists from nearby suburban Decatur, College Park and the adjacent city of East Point have been strongly associated with artists and record producers from "SWATS" ("Southwest Atlanta, Too Strong"), whom have substantially contributed to the evolution of the southern hip hop genre over the course of the 2000s.[26]

While the controversial process of gentrification started in the larger Atlanta Metropolitan Area in the 1970s, it was only in the latter 2010s that redevelopment substantially spread to College Park proper.[27] In 2016, the College Park government embarked on a 20-year development plan which included goals "to expand its economic base while keeping its small town historic characteristics," and to "make use of its available land to attract new employers and residential opportunities."[28] 2017 saw the construction of a mixed-use project which contained the first mid-rise apartments to be constructed in the city since 1969.[29] From the 1990s and into the 2010s, the City of College Park succeeded in repurchasing the entirety of the 320 acres adjacent to downtown; in 2018, concurrent with substantial commercial and residential development in the area, the City of College Park announced major redevelopment of this abandoned area, now referred to as "Airport City," as part of a larger transit-oriented revitalization plan referred to as "Aerotropolis."[30] Airport City will offer a 400+ acre mixed-use development, allocating 1 million square feet for office space, 700,000 square feet for retail space, limited residential space and 1,100 hotel rooms, in addition to entertainment venues and a nine-hole golf course. Infrastructure development is slated for late 2019.[citation needed] 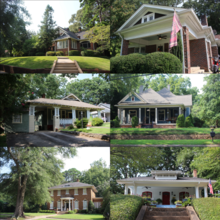 The city center is part of the College Park Historic District, a 606-acre historic district listed with the National Register of Historic Places.[9] According to the federal agency, the district contains 853 recognized historical resources constructed in the late 19th and early 20th centuries.

The majority of the 852 historic structures are homes of the Queen Anne style, various Late 19th and 20th Century Revivals, and bungalows of the American Craftsman style, all dating from 1882 to 1946.[9] Other major historical structures include:[9] The College Park Woman's Clubhouse at Camellia Hall (1927);[31] the College Park First United Methodist Church (1904);[32] a United States Postal Service Office (1937); four schools (constructed between 1914 and 1942); and the College Park Depot (pre-1900), part of the Atlanta & West Point Railroad.[33]

College Park is home to the College Park Municipal Golf Course, a nine-hole course established in 1929.[39]

In February 2018, development began on the Gateway Center Arena, a 5,000 seat multipurpose arena intended for public use, as well as to host the Atlanta Hawks NBA G League team, the College Park SkyHawks.[citation needed]

Between 2000 and 2010, College Park saw a 31.6% reduction in their population. The city government has suggested that this was due to the combined effects of airport expansion and the difficult nature of having housing constructed in areas previously considered to be "high noise." [42]

The city of College Park is governed by a mayor and four council members. The current mayor is Bianca Motley Broom, the first female, African American mayor for the City, and the council members are: Ward 1, Ambrose Clay; Ward 2, Derrick Taylor; Ward 3, Ken Allen; and Ward 4, Roderick Gay.[43]

The mayor is elected at-large, on a nonpartisan basis, for 4 year terms.[44] The incumbent mayor, Bianca Motley Broom, has held the office since 2020.[45]

Four council members are elected on a nonpartisan basis for 4 year terms, and each represents one of the four wards that make up the city.[44] Legislative authority is placed in the city council, wherein each member is afforded one vote; the mayor oversees the deliberations of the council and is only entitled to a vote in the case of a tie.[46]

For much of the 2000s, College Park – along with the other so-called Tri-Cites, East Point and Hapeville – has been popularly associated with crime;[47] for example, a comedy/travel book originally published in 2005 describes College Park as "a nightmarish southern ghetto."[48] Over the course of the 2010s, this reputation has been publicly challenged in the media, by Tri-Cities residents, and by the College Park Police Department.[49][50][51]

The Federal Bureau of Investigation's annual Uniform Crime Report reveals that the College Park Police Department has historically reported a high crime rate per 100,000 persons as compared to other US jurisdictions.[52] In 2008, College Park had one of the highest crime rates in Georgia, with reports including 13 homicides. However, 2008 was an outlier with respect to the rest of that decade and homicide; for the rest of the years between 2000 and 2010, between 1 and 3 homicides were reported annually. Further, it has been suggested that crime rate per 100,000 persons misrepresents the prevalence of crime, as College Park's daytime population is thought to swell to 50,000 persons (substantially more than the ~15,000 permanent residents considered in crime statistics).[53]

As of the 2016 American Community Survey, 35.7% of College Park residents are predicted to live in poverty.[57]

In November 2019, The Gateway Center Arena @ College Park opened to the public, home to the College Park Skyhawks - the NBA G-League affiliate of the Atlanta Hawks - and the WNBA's Atlanta Dream. In addition, the Arena has an exclusive booking partnership with The Fox Theater.[citation needed]

According to College Park's 2017 Comprehensive Annual Financial Report,[58] the top employers in the city are:

Residential areas within College Park are served by the Fulton County School System.

Retrieved from "https://en.wikipedia.org/w/index.php?title=College_Park,_Georgia&oldid=940438548"
Categories:
Hidden categories:
The article is a derivative under the Creative Commons Attribution-ShareAlike License. A link to the original article can be found here and attribution parties here. By using this site, you agree to the Terms of Use. Gpedia Ⓡ is a registered trademark of the Cyberajah Pty Ltd.