Colorado's 2nd congressional district is a congressional district in the U.S. state of Colorado. The district is located in the north-central part of the state and encompasses the northwestern suburbs of Denver including Boulder, Northglenn, Thornton, and Westminster. The district also includes the mountain towns of Vail, Grand Lake and Idaho Springs. Redistricting in 2011 has moved Larimer County, including the cities of Fort Collins and Loveland, to the 2nd from the 4th district[5] for the 2012 election.

The district is currently represented by Democrat Joe Neguse. He was elected in 2018 to replace Jared Polis, who retired after being elected governor of Colorado.

Following the 2010 U.S. Census and associated realignment of Colorado congressional districts, the 2nd congressional district consisted of Broomfield, Clear Creek, Gilpin, Grand, Larimer and Summit counties; most of Boulder and Jefferson counties; and portions of Eagle and Park counties. Following the census, the 2nd district stretched further north to the Wyoming border while losing the western portion of Eagle County.

This district is anchored in Boulder and Larimer counties which have the bulk of population in the district. 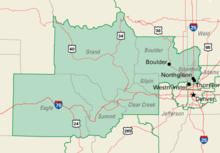 Retrieved from "https://en.wikipedia.org/w/index.php?title=Colorado%27s_2nd_congressional_district&oldid=969116537"
Categories:
Hidden categories:
The article is a derivative under the Creative Commons Attribution-ShareAlike License. A link to the original article can be found here and attribution parties here. By using this site, you agree to the Terms of Use. Gpedia Ⓡ is a registered trademark of the Cyberajah Pty Ltd.