The Columbus, Georgia Metropolitan Statistical Area, as defined by the United States Census Bureau and colloquially known as the Chattahoochee Valley, is an area consisting of four counties in Georgia and one county in Alabama, anchored by the city of Columbus. As of the 2010 census, the MSA had a population of 296,506 (though a July 1, 2016 estimate placed the population at 308,755).[1] The Columbus metropolitan area is a component of the Columbus-Auburn-Opelika (GA-AL) Combined Statistical Area, a trading and marketing region. 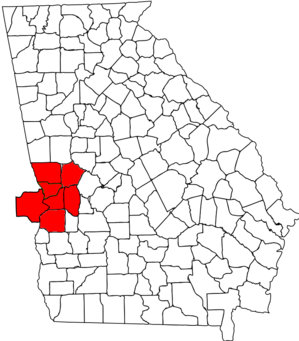 Note: In 2018, the U.S. Census Bureau revised the official area definition of the Columbus, Georgia Metropolitan Statistical Area. Two additional Georgia counties, Stewart and Talbot, will be included in all statistics of the 2020 decennial census and in all annual population estimates after 2018.[2]

Places with more than 180,000 inhabitants

Places with less than 1,000 inhabitants

Retrieved from "https://en.wikipedia.org/w/index.php?title=Columbus_metropolitan_area,_Georgia&oldid=934742852"
Categories:
Hidden categories:
The article is a derivative under the Creative Commons Attribution-ShareAlike License. A link to the original article can be found here and attribution parties here. By using this site, you agree to the Terms of Use. Gpedia Ⓡ is a registered trademark of the Cyberajah Pty Ltd.