Commerce Township, officially the Charter Township of Commerce, is a charter township of Oakland County, and suburb of Detroit, located in the U.S. state of Michigan. The population was 40,186 at the 2010 census.[3] The terrain is rolling hills with large expanses of flat farmland and suburban development. The Huron River runs mostly north-south through the township. Commerce was formerly a weekend and summer resort for Detroiters because of the area's small inland lakes and peaceful seclusion, but due to recent development the cottages are now all permanent homes. There has been a sharp increase in population in the last few years, mostly on or near the several lakes and golf courses. Much of Proud Lake State Recreation Area is within the township. The northern terminus of M-5 is in Commerce. The busy highway would have continued north to Interstate 75, but because of the area's high property value and the many lakes that dot the landscape such a project would have been far too costly.

In 1994, David Hahn, a 17-year-old Eagle Scout, constructed a makeshift nuclear reactor in his backyard in Commerce Township, exposing himself and his neighbors—and maybe even as many as 40,000 people in the area—to radioactive materials, and drawing the attention of the EPA. The event became a short-lived media sensation, and a book by Ken Silverstein called The Radioactive Boy Scout was written about the incident and published in 2004.

Most of the Township's southern areas are covered by the following cities.

Additionally, there are 4 unincorporated communities in the Township: 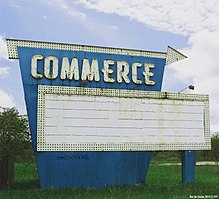 There were 12,379 households out of which 42.4% had children under the age of 18 living with them, 68.4% were married couples living together, 7.3% had a female householder with no husband present, and 21.2% were non-families. 17.0% of all households were made up of individuals and 4.3% had someone living alone who was 65 years of age or older. The average household size was 2.81 and the average family size was 3.19.

Retrieved from "https://en.wikipedia.org/w/index.php?title=Commerce_Township,_Michigan&oldid=925935318"
Categories:
Hidden categories:
The article is a derivative under the Creative Commons Attribution-ShareAlike License. A link to the original article can be found here and attribution parties here. By using this site, you agree to the Terms of Use. Gpedia Ⓡ is a registered trademark of the Cyberajah Pty Ltd.