House of the first Confederate family in Americana. 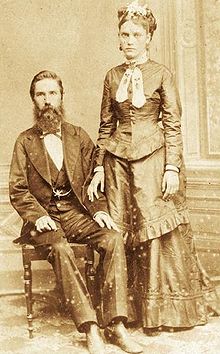 The Confederados (Portuguese pronunciation: [kõfedeˈɾadus]) were some 10,000 to 20,000 Confederates who moved to Brazil, chiefly to the state of São Paulo, from the Southern United States after the American Civil War. Although many eventually returned to the United States after Reconstruction, some remained and descendants of Confederados can be found in many cities throughout Brazil. The city of Americana, Brazil was founded by these emigrants.

In 1865 at the end of the American Civil War a substantial number of Southerners left the region; many moved to other parts of the United States, such as the American West, but a few left the country entirely. The most popular destination for emigration was the Brazilian Empire, where slavery remained legal.[1]

Emperor Dom Pedro II wanted to encourage the cultivation of cotton. After the American Civil War, Dom Pedro offered the potential immigrants subsidized transport to Brazil, cheap land, and tax breaks.[2] Many Southerners who took the Emperor's offer had lost their lands during the war, were unwilling to live under a conquering army, or simply did not expect an improvement in the South's economic position. Former Confederate President Jefferson Davis and General Robert E. Lee advised Southerners against emigration, but many ignored their advice and set out to establish a new life away from the destruction of war and Northern rule under Reconstruction. Most of the immigrants were from the states of Alabama, Texas, Louisiana, Mississippi, Georgia, and South Carolina.

No one has determined how many Americans immigrated to Brazil in the years following the end of the American Civil War. As noted in unpublished research, Betty Antunes de Oliveira found in port records of Rio de Janeiro that some 20,000 Americans entered Brazil from 1865 to 1885.[citation needed] Other researchers have estimated the number at 10,000.[3] An unknown number returned to the United States when conditions in the South changed, as Reconstruction ended and the Jim Crow era began. Most immigrants adopted Brazilian citizenship.

The immigrants settled in various places, ranging from the urban areas of Rio de Janeiro and São Paulo to the northern Amazon region, especially Santarém, and Paraná in the south. Most of the Confederados settled in the area to the north of São Paulo, around present-day Santa Bárbara d'Oeste and Americana. The latter name was derived from Vila dos Americanos, as the natives called it. The first Confederado recorded was Colonel William H. Norris of Alabama, who left the U.S. with 30 Confederate families and arrived in Rio de Janeiro on 27 December 1865.[4] The colony at Santa Bárbara D'Oeste is sometimes called the Norris Colony.

Dom Pedro's program was judged a success for both the immigrants and the Brazilian government. The settlers quickly gained a reputation for honesty and hard work.[1] The settlers brought modern agricultural techniques for cotton, as well as new food crops, which spread among native Brazilian farmers. Some dishes of the American South were also adopted in general Brazilian culture, such as chess pie, vinegar pie, southern fried chicken,[2] and Texas caviar (known as salada de feijão-fradinho in Portuguese).

The early Confederados continued many elements of American culture, for instance, establishing the first Baptist churches in Brazil. In a change from the South, the Confederados also educated slaves and black freedmen in their new schools.[2] A few newly freed slaves in the United States emigrated alongside their Confederate counterparts and in some cases with their previous owners. One such former slave, Steve Watson, became the administrator of the sawmill of his former owner, Judge Dyer of Texas. When Dyer returned to the US, due to homesickness and financial failure, Dyer deeded his remaining property, the sawmill and 12 acres, to Watson. In the area of the Juquia valley there are many Brazilian families with the surname Vassão, the Portuguese pronunciation of Watson.[2]

Descendants of the immigrants

In 1972, Georgia Governor Jimmy Carter visited Brazil and remarked on the similarity between American Southerners and Confederados, descendants of Confederates who immigrated to Brazil after the Civil War. The youngsters with him are fifth-generation Confederados. The Rev. Ballard S. Dunn (top) of New Orleans led a large contingent of Southerners to Brazil. Flags of Brazil, the Confederacy and the U.S. in a church speak to the descendants' mixed heritage.

The first generation of Confederados remained an insular community. As is typical, by the third generation, most of the families had intermarried with native Brazilians or immigrants of other origins. Descendants of the Confederados increasingly spoke the Portuguese language and identified themselves as Brazilians. As the area around Santa Bárbara d'Oeste and Americana turned to the production of sugar cane and society became more mobile, the Confederados moved to cities for urban jobs. Today, only a few descendant families still live on land owned by their ancestors. The descendants of the Confederados are mostly scattered throughout Brazil. They maintain the headquarters of their descendant organization at the Campo center in Santa Bárbara d'Oeste, where there is a cemetery, chapel and memorial.

The descendants foster a connection with their history through the Associação Descendência Americana (American Descendants Association), a descendant organization dedicated to preserving their unique mixed culture. The Confederados also have an annual festival, called the Festa Confederada, dedicated to fund the Campo center. The festival is marked by Confederate flags, Confederate uniforms and hoop skirts, food of the American South with a Brazilian flair, and dances and music popular in the American South during the antebellum period. The descendants maintain affection for the Confederate flag even though they completely identify as Brazilian. Many Confederado descendants have traveled to the United States at the invitation of the Sons of Confederate Veterans, an American descendants' organization, to visit Civil War battlefields, attend re-enactments, or see where their ancestors lived.

The Confederate flag in Brazil has not acquired the same political symbolism as it has in the United States. Many descendants of the Confederados are of mixed race and reflect the varied ethnic groups of Brazilian society in their physical appearance. In the wake of then-Governor Jimmy Carter's visit to the region in 1972, Americana incorporated the Confederate flag into the municipal coat of arms (though the largely Italian-descended population removed it some years later, reasoning that descendants of Confederados now comprise but a tenth of the municipal population). While in Brazil, Carter also visited the city of Santa Bárbara d'Oeste and the grave at the Campo of a great-uncle of his wife Rosalynn. Her relative was one of the original Confederados. Carter remarked that the Confederados sounded and seemed just like Southerners.[1]

Campo Cemetery with its chapel and memorial, in Santa Bárbara d'Oeste, is a site of memory, as most of the original Confederados from the region were buried there. Because they were Protestant rather than Catholic, they were excluded from the local cemeteries and had to establish their own. The Confederado descendants' community has also contributed to an Immigration Museum at Santa Bárbara d'Oeste to present the history of immigration to Brazil.

Because of their small numbers, the Confederados have been mostly forgotten as a group. In recent years, some limited studies have been conducted on the influence the Confederado immigration had on Brazil and Latin America as a whole.

Retrieved from "https://en.wikipedia.org/w/index.php?title=Confederados&oldid=947148138"
Categories:
Hidden categories:
The article is a derivative under the Creative Commons Attribution-ShareAlike License. A link to the original article can be found here and attribution parties here. By using this site, you agree to the Terms of Use. Gpedia Ⓡ is a registered trademark of the Cyberajah Pty Ltd.